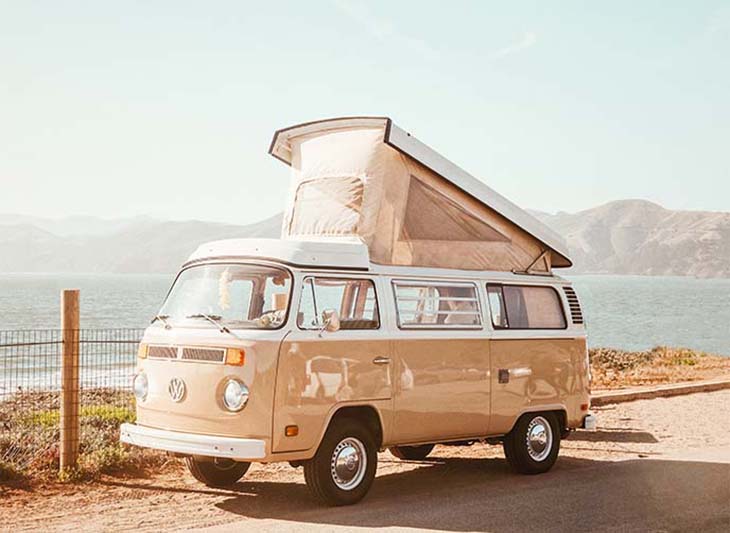 When you think of the summer, there are a few things that come to mind. Long hot days, cool evenings, and a lot of time spent at the beach. With the hot weather on the horizon, now is the time to start dreaming about what you will be doing this summer. Might you be thinking of a road trip? Or maybe camping out down by the sea or at a festival somewhere? Then you might be thinking of the perfect vehicle for you and your friends to use this summer – the campervan.

There’s few better things than you and your friends jumping in the back of a kitted out cool camper as you drive around the country, making the most out of your time in the sun. Here are our selection of the five coolest campervans you can drive this summer.

The most iconic of all campervans, the Volkswagen Barbarossa camper is the classic car most associated with free-spirited individuals living life as they please – in other words, hippies. Yes, the VW camper is something that’s closely associated with the free-loving swinging sixties. It’s also a car that’s closely linked to surf culture, allowing you to camp inside as you wait for the perfect waves to come.

Finding one of these vintage beauties is not too difficult, but they are very much still in demand. Having first hit the roads in the sixties, many of these cars now count as historic vehicles and so do not require any car tax to be paid. You will have to fight off an array of classic collectors, ageing hippies and surfer dudes to get one, but it will be well worth it.

While it lacks the more advanced technology and creature comforts that come with modern campervans, none can rival the experience and authenticity of the Barbarossa. Its iconic look with the spare wheel on the front and white and pastel paint job, it’s still a beautiful car. Plenty of space inside for bedding, cookware and the gear you need for your activity, means it is still practical enough. Just be wary as you’ll see plenty of hitchhikers wanting to take advantage of the free spirit this car represents.

For a more modern version of the Barbarossa, you should go for the Volkswagen California. But don’t expect the same experience. For a start, the looks of the California are vastly different. The Barbarossa was built in a time where aerodynamics, crumple zones and safety were not as much of a priority as practicality. The sharper angles of the California will provide you more protection, and the sleek lines mean you won’t be paying as much at the petrol station.

But you will appreciate the vast amount of connected technology inside. You can hook up your phone or tablet to the onboard entertainment system, giving your music a boost through the car’s juicy speakers. You’ll appreciate the air conditioning and climate control, allowing you to adjust the temperature to your choosing. Perfect for cooling down after a long day spent in the sun.

You’ll also find the built-in refrigerator and cooker a lifesaver, allowing you to keep some fresh food inside the car. So you won’t have to rely on canned or tinned goods, or foods stuffed with preservatives.

You can also adjust the seats inside to fold down into surprisingly comfortable beds. So you have a car that has the history of Volkswagen, but a few more mod cons to make the experience more palatable.

A thoroughly different beast to the two previous campervans, the Fiat Trigano Tribute is more like a caravan on wheels than the rough and ready Volkswagen Barbarossa or the updated California. It looks like it too, especially in the rear interior where you don’t have seats but a bench seat instead. This is designed to be parked up and lived in, so is better for 2-3 passengers rather than a gang of your mates.

If you prefer a few more modern amenities, then the Trigano has you covered. As well as a working toilet that can be used and flushed (but not while driving), you also have a shower. Perfect for those times where you’re parked off a campsite with no shower block to use.

There’s a large fridge, freezer and hob inside that work on gas or electric, with recharging assisted by solar panels on the roof. So you won’t be killing your battery to cook your dinner.

For a more all-round campervan, the Ford Terrier is perfect for those wanting to fit a few more passengers inside. Designed to fit the American idea of long road trips and camping in national parks, the Terrier will sleep four inside, with space for beds and the raising roof giving a bit of extra room.

There isn’t as much space inside here as the others on the list, but what space it does have is used well. There is a compact kitchen, designed to perform simple functions well. There are also a surprising amount of smart storage solutions, so you can fit more inside than you might imagine.

A lot of the best modern campervans are those that are adapted from normal models. The Luna Campers Lerina takes its Toyota Proace body and turns it into a comfortable home on wheels. Built by the camping loving French, the Lerina has air conditioning, built in fridge freezer and hob, and sleeps four people.

And when you’re driving, there’s a DAB digital radio to give you entertainment, sat-nav to help you find those off-the-grid campsites, and a stop/start engine system to help you save fuel on the road. Ideal if you get caught in those long summer traffic jams that can make driving a nightmare.

Looking to Hit The Road This Summer?

Whether you want one of our selection of campervans, or an upgrade to your existing motor, changing your car in time for the summer is easy with Creditplus. Apply online today, and we’ll help you find, fund and deliver the perfect new vehicle for those hot summer days and cool summer nights.