England and Wales in 2012 local councils allegedly paid around £23million in compensation to drivers whose vehicles had been damaged by the generally poor state of the country’s roads. As most of us would be aware the specific problem affecting the roads is potholes.

Driving On The Moon

The nation’s infrastructure has, in recent years, often been likened to the crater-filled surface of the moon. According to a recent report by the AA, more than a third of drivers have had their vehicle damaged as a result of roads in varying states of disrepair. Although the ensuing types of damage can differ, one of the most common issues facing road users is the considerable expense of repairing or replacing their tyres. As if the cost of driving wasn’t high enough already! 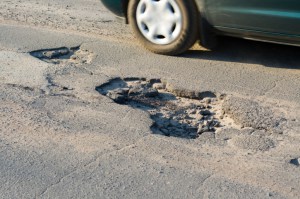 With reports of burst tyres on the increase, not to mention extreme cases where drivers have had their cars written off, motorists are looking into how they can protect against the unexpected costs of our pothole peppered roads. For some it is reassuring to know that they can be protected by tyre insurance, as well as GAP insurance for extreme cases where a vehicle is actually written off. With cover available from independent providers like ALA Insurance for up to 5 replacement tyres costing as little as £159, it’s little wonder people are increasingly trying to guard against the likelihood of pothole related tyre damage.

The seemingly staggering sum of £3 billion has been given to councils nationwide to try to address the problem. However the Asphalt Industry Alliance (AIA) has suggested that this will barely scratch the surface, with the amount required to improve the quality of the roads actually closer to £10.5 billion.

Attempts have been made by local authorities to tackle the damage; over 2 million potholes were filled in 2011. Whilst this was an increase of 500,000 repairs compared to 2011, the effort could be described as somewhat futile in the face of an already extensive back log of required maintenance resulting from severe winters, widespread flood and according to Peter Box, Chair of the Local Government Association Economy and Transport Board “decades of underfunding by Whitehall”.

Even where councils carry out the necessary repairs, the fundamental “patching up” of potholes (although a quick fix) will in fact cost more money in the long term. The cost of this method is 20 times more than actually fully resurfacing a road which would then remain in good repair for 15-20 years. When taking this into account with the compensation paid to affected drivers and cyclists councils are barely keeping their heads above water. Without adequate funding they can only continue to react to complaints as they arise rather than be able to proactively keep the roads in a good state of repair.

With the current economic climate, these problems are unlikely to be solved overnight or even in the immediate future. Whilst an extra insurance policy isn’t a long term solution to a nationwide predicament it can be reassuring to know that, just in case, you can protect yourself and your wallet from unexpected costs.