Humans can think up some pretty horrifying things when given the task. The creatures and places dreamed up from that dark place in our minds have terrified and thrilled us for years in ghost stories, movies and nightmares. We’ve imagined the apocalypse in hundreds of different ways, dark creatures outside our windows and 300-foot lizards.

Whilst the automotive industry doesn’t generally acknowledge influence from these dark designs with the cars it creates, there have been some truly horrifying monstrosities released to the world over the years. With Halloween upon us once again, we’ve decided to pair up the scariest of the car world with the greatest movie monsters of all time. 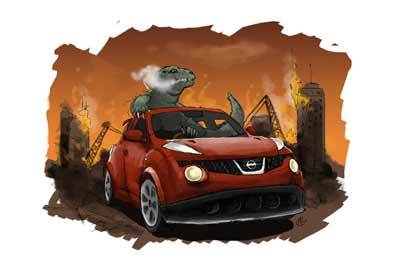 In 1954 (1956 in the USA), Godzilla was unleashed upon Tokyo, causing destruction and terror. The film by Toho Co., Ltd and directed by Ishirō Honda has become a bona-fide classic, spawning dozens of sequels and spinoffs to the screen and including such classic face-offs as “Godzilla Vs King Gidorah”, “Godzilla Vs Mothra” and of course, “Godzilla vs Mechagodzilla”.

The name of Godzilla was tarnished somewhat by the slightly rubbish 1998 Matthew Broderick vehicle directed by destruction-porn lover Roland Emmerich, but let’s forget about that, shall we? The beast looks set to rise again in 2014 in a film directed by Monsters director Gareth Edwards, so let’s hope our big lizard friend comes back in style.

So what car would be fit for a 21st-century lizard with atomic breath and an appetite for destruction? The Juke R, of course.

Boasting a total power output of 545 horsepower, the Juke R is essentially a raised family hatchback with a stolen engine from Nissan’s popular GT-R sports car and is just about as ridiculous and overpowered as they come, so what better for our nuclear-powered monster than a machine from its home country? With acceleration from 0-62MPH in 3.0 seconds and a top speed of 170MPH, our favourite Kaiju will be able to ride in terrifying style for years to come. 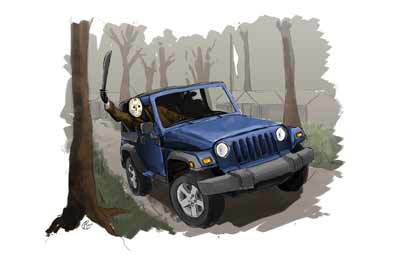 Unstoppable, rugged and intimidating. Am I describing a car, or a certain be-masked horror movie icon?

Jason Voorhees is the serial antagonist from the Friday the 13th movies, and is a regular costume choice for halloween parties. He’s been in more movies than you can shake a machete at (be careful with that thing), and is one of the most distinctive characters in the history of horror movies.

Though originally wearing a sack over his head to conceal his deformed face, Jason has been featured mostly wearing a sinister hockey mask. He relentlessly tracks down his prey across any terrain, preferring to make his kills up-close and personal with a machete.

There’s nothing more terrifying than seeing that grille come over the hill, signaling your imminent demise – right? Well, how about if said monster was coming over the hill in a capable, imposing vehicle?

The Jeep has been around for a long time, with roots going back to World War 2 use by the US military services (that’s right – ALL of them). Today, the Wrangler still features solid axles – known for great articulation and strengh compared to other, more modern 4×4 tech. Now owned by Chrysler, the Jeep marque has kept the company’s intimidating and solid face – reminiscent of a certain young man’s hockey mask – and rugged off-road capabilities. This thing just won’t die, and neither will Jason. What more could a celebrated monster want in a car? 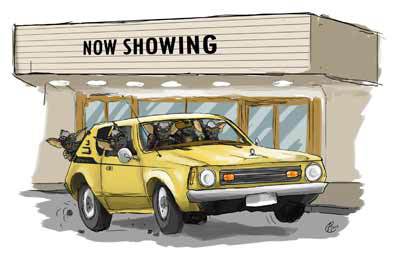 “Disruptive” is a word which can be used to describe those little critters we call gremlins. Whether we’re talking about AMC’s 1970 car, marketed as “America’s first subcompact” or those cute little fluffballs who you REALLY shouldn’t let eat after midnight. Because, well, they don’t stay fluffballs for long…

Gremlins – released in 1984 and produced by Steven Spielberg’s Amblin Entertainment – told the story of a young man and his “Mogwai”, a friendly little creature with a dark secret and a set of rules which should never be broken (but hey, this wouldn’t be a fun movie if the rules weren’t broken!)

Soon, the cute little Mogwai splits into multiple creatures with minds of their own, turn into mischievous reptiles and head off into the night to cause hilarious mayhem in Smalltown America. But what if they wanted to go further than the fictional Kingston Falls? What if they had the mental capacity and patience to know how to drive?

Roll up, AMC Gremlin. Not only is the name absolutely perfect, but its disruptive nature as a fun, tiny car in a big-car world makes it a great pairing for the critters. It was also an inexpensive, yet strong little car which took part in many different forms of motorsport throughout its lifespan – a worthy car for the Gremlins to wreak havoc until the sun comes up! 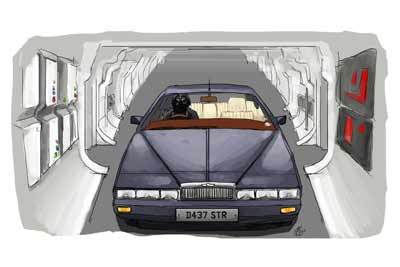 If there’s one villain on this list who deserves no introduction, it’s the once-Jedi, now-Sith Lord – Darth Vader. Since release in 1977, Star Wars has become firmly lodged in the public’s collective consciousness worldwide, and its antagonist Lord Vader has become an instantly recognizable household name.

The Death Star – a huge, moon-sized weapon designed to destroy all who oppose the Galactic Empire – is a big, big place. With a diameter of around 160km, there are plenty of wide, vacant corridors to get about the place and get a great work-out at the same time! Of course, Darth Vader shouldn’t have to walk to get from one end of the station to the other (do spheres have “ends”?) – He needs a big, imposing and ridiculous car to hoon around.

The Series 2 Aston Martin Lagonda was a luxury saloon produced in a limited run of 645. Reminiscent of an Imperial Star Destroyer with its long, thin hood and imposing lines, it would be the perfect runabout for the Sith Lord and his master Darth Sidious to get to the on-ship Cantina before the stormtrooper lines get too long.

Sporting a 5.3 litre V8 capable of 143 mph, the dark lord will travel the Death Star in style in this odd, kinda ugly but powerful and imposing British car. 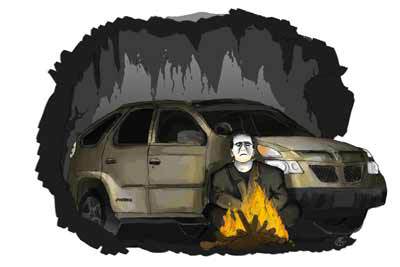 When Victor Frankenstein created life, he saw he’d created a monster and cast it out.

Abandoned from the world, the creature wandered through the wilderness until he found a family living in the woods. He taught himself to speak by watching them, and befriended the blind patriarch. When the family saw the beast and drove him out once again, he continued his journey, ‘til one day he stumbled upon a barn. Forcing the door open so he can hide from the cold winter, he waited for his eyes to adapt to the darkness.

The creature wandered around the cluttered garage, inspecting all the trinkets and objects cast aside. In the corner, under a blanket laid a large, imposing shadow. Stepping closer, he removed the blanket to reveal the object underneath, and gasped. Below the fabric lay an machine as beastly and hated as himself – A Pontiac Aztek.

OK, so this wasn’t from the official telling of Mary Shelley’s seminal novel, but it makes sense. From the moment the Aztek was unveiled, there was instant hatred. It was mocked, chastised for its ugliness.

Now regularly used as a case study as how not to design a car, the Mexican-built Aztek has taken a place on many “worst cars ever” lists from publications including the Telegraph and TIME magazine. A worthy companion to the most misunderstood monster of all, then?

Illustration Shout-out – Thanks to Alice Cheetham of Running Riot

Do you agree with this list? Can you think of any other car/monster mash-ups you’d like to see? Let us know in the comments below, and take a better look at the illustrations over on our Facebook page. Happy Halloween!