What my car says about me – Volkswagen Polo

What my car says about me – Volkswagen Polo

There’s a reason I bought a Volkswagen Polo and it’s that they’re pretty indestructible, and judging by the turbulence of my relationship with it, it needs to be!

I’ve always kind of wished I’d been born a decade earlier. There to enjoy the fruits of 90’s cult, and been old enough to go to the cinema to watch the likes of Pulp Fiction and Fear and Loathing in Las Vegas- as it all happened. Add to that the fact that my parents always drove VW’s and that my mum’s first car was a Polo, may all have influenced my decision to buy a VW. The squarer the dashboard, the better. The retro, boxy look on car never gets old for me, and there’s a certain nostalgia mixed in there too. Anyway, let me take you on a tour of my car…

I won’t lie about it. My car is in a pretty remarkable state of disrepair. The tyres and boot are usually encrusted with mud from weekends when I decided it would be a great idea to pack up my bike and go cycling in the rain. I very rarely bring my car to the car wash for this reason, what’s the point? That’s what parking it in the street on a rainy evening is for.

If you peer inside you will see the nooks around the seats neatly lined with hay from the festival I went to last summer. The awkward bits that I can’t for the life of me get the vacuum cleaner to. Does it bother me? No. When it catches my eye it instantly reminds me of long summer nights in a field with my friends, listening to bands on the stage in the distance. Which brings me to the dents in the side. These date back to when I might have been trying to tackle tent poles too close to my car, after deciding to have a few drinks around the campfire before deciding to put my tent up. Needless to say I slept in my car that night. Oops. 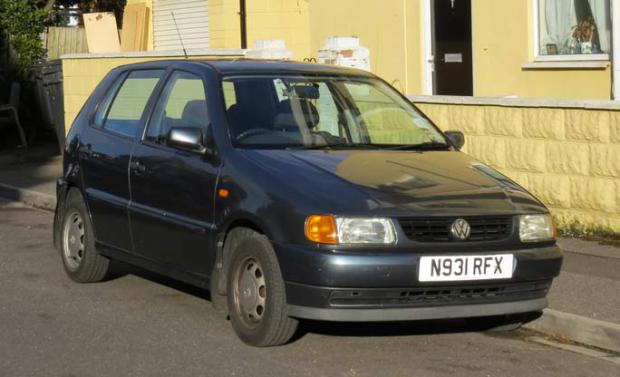 Look closely at my car, and you are likely to meet the residents-of-my-wing-mirror spider family. Being the nature fanatic that I am, I’m glad that they’ve found their perfect fly-catching spot. What this says about me? Likely a bit about my eco-warrior/hippy leaning.

The fact that I climb through the boot of my car to unlock it probably says quite a bit about me. In the space of two weeks both the passenger and driver side locks broke. I could have had it fixed, but it’s funny how quickly you get used to something that initially seems like you could live without. I’m pretty sure Darwin said something about adaptability being a good thing. I’ll let you make your judgements.

So why don’t I get all of these things fixed? I hear you say. Well, my Polo is getting more expensive to fix thanks to it being an old car. I’ll give you the example of the door locks. It would cost me £400 to replace the parts because they’re just not manufactured any more. As long as my car functions well enough to get me to where I want to go, I will always stash my cash to save up and travel. For someone that loves the sun, I’d say that shows I have my priorities in order!

Let’s add in a bit of psychology. Professor Andrew Blake, a social scientist specialising in driving habits states there are two main groups of drivers; the expressives and the instrumentalists. The instrumentalists being the car owners that are more likely to ‘tolerate failings or idiosyncrasies’ and ‘are affectionate about a cars failings’. Sounds like I’m definitely an instrumentalist then! Additionally, Dr Peter Marsh, a psychologist from the Social Issues Research Centre, says, “Driving can represent an everyday escape in the sense that the car absolves the driver of any other responsibility to be anything more than a driver for the duration of the drive.” …and that’s maybe why I don’t tend to it’s every need, it’s one area of my life I can allow myself to be complacent with and not have to worry about!

So what does my car say about me? I think it says that I’m quite nostalgic, every dent, scratch and bit of dirt has a story. It says that I’m down to earth and like reliable things that I don’t have to stress about and can keep up with my outdoorsy lifestyle.

I tell people my car is just a means of getting from A to B, but in reality, I love my car, and despite its flaws it gives me the freedom to get to the places I want to be with the people I want to be with. I can’t argue with that.

If my story on what my VW Polo says about me makes you crave a used Polo, take at look at our vehicle database!