When putting together the F1 2015 Season preview, we were keen to avoid using boring stock photos of Formula One. So we went in search of something a bit more…special. And we found it with Darren Heath (@f1photographer). Photographing Formula One since he was a teenager, Darren’s work is a cut above the standard race day images. Find out more about the man behind the stunning images.

Formula One in the blood

Darren Heath was indoctrinated into the world of Formula One from the early age, some of his earliest memories of watching Jackie Stewart racing, celebrating James Hunt winning the title with his father. It seemed Formula One and motorsport were destined to be a part of his future. Discovering a passion for photography, the two seemed to be a unique combination that set Darren on the path to where he is today.

“Since before I can remember photographing Formula 1 is all I’ve ever wanted to do! As a teenager I spent many weekends at UK race circuits and spent almost every penny I had on camera equipment and film.”

The foundry where Darren would learn his craft would be Brands Hatch. His father would take Darren to the circuit and drop him off, where he would take photos of the motorsport action across a number of different formulas, the 1982 British Grand Prix one of the early big races he documented. Not only would Darren photograph the racing, he would also photograph the cameramen, hoping to gain an insight into what equipment they were using, how they set up.

“After two years of studying photography at college I started my career as a black & white printer for a London based motorsport photographic agency. From that moment on it was really a case of proving to my boss that I was worthy of covering races and working hard towards the eventual goal of shooting F1.”

The hard work paid off and Darren was soon heading outside the UK to photograph F1, his first international excursion the 1989 German Grand Prix. His work was highly praised, and earned him a position as the chief contributing photographer for F1 Racing magazine from 1996 to 2007.

What sets Darren’s photography apart from most other’s is the artistic approach he takes to capturing an image. It doesn’t always have to be a crystal clear, concise image of a car racing across the track. It can have abstract elements, as evidenced in the below photo, one of the favourite’s he’s taken. 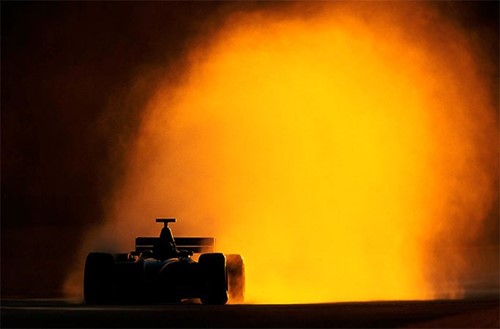 “Every new F1 season I resolve to take better pictures than the previous season so I hope I haven’t taken it yet! Having said that the picture of a Jaguar ‘wet weather’ testing at the Valencia circuit would be right up there. An iconic F1 shape silhouetted by a bright-orange-setting-sun-lit-’rooster-tail’ of spray will be hard to repeat let alone beat!”

An image is worth a thousand words, so why tell the story as simply as possible? Most of Darren’s work shows an artistic approach that creates a feeling inside of you. It this drive to create something different that has pushed Darren to the top of the sport.

“Formula 1 is a heady mix of speed, colour, noise, glamour, cut-throat competition and a relentless push – by almost all involved – to be better than they already are. I am naturally very competitive and relish the constant challenge of improving my photography. Travelling the world and getting paid to take pictures of a sport I adore really is a privilege and one that I remain constantly aware of.”

At the very top

Darren’s photography are not always just artistic. They can also be journalistic, even leading to rule changes in the sport. Photos he took of David Coulthard’s McLaren car in 1997 revealed a secret braking system. Each McLaren had two brake pedals, an extra one for the rear brakes. This gave them more ability to alter a car’s behaviour in corners. Darren’s photo of the extra pedal, as well as the glowing brake discs on the rear of the McLaren, appeared in F1 Racing magazine. The cat out of the bag, the device was soon banned by the FIA. 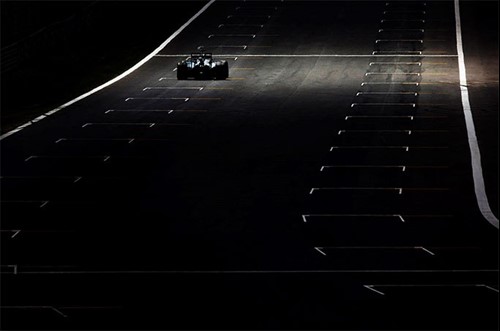 This combination of artistic flair and eye for detail has led to Darren receiving one of the highest honours in photography – an Honorary Fellowship of The Royal Photographic Society in 2006. A browse across his website and its easy to see why he’s been rewarded. 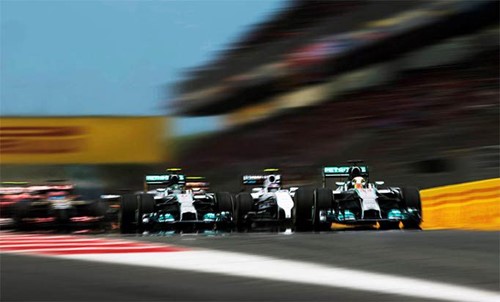 To view more of Darren Heath’s work, visit his website www.darrenheath.com. You will also be able to read his race by race blog and order prints of his fantastic images. You can also find him on twitter @f1photographer.