The 2014 plate has been a tremendous success with consumers all over the UK performing much better than anticipated. Mike Hawes, Chief Executive from SMMT commented “New car registrations surged 17.7% in March to 464,824 units, a surprisingly strong level of growth and a reflection of intensifying consumer confidence and the availability of great new products”. 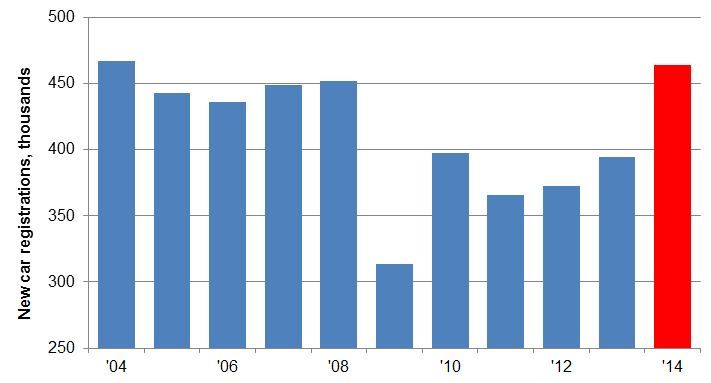 The sales figure was also the second-highest on record since the introduction of twice-yearly car registrations in 1999.

Mr Hawes commented “given the past six years of subdued economic performance across the U.K, there is still a substantial margin of pent-up demand that is contributing to a strong new and used car market”.

The huge demand for the new 14-plate can be put down to several reasons, the first being the fantastic range of new vehicles available on the market.

The second reason could be attributed to the attractive finance packages available to consumers. The competitive finance deals available have boosted sales, with many drivers being able to take advantage of low repayments and the ability to switch from vehicle to vehicle more easily.

Mark Hawes comments “there has never been a better time to buy a new car thanks to attractive finance deals and advanced technologies that often make new cars cheaper to run. We expect the market to continue to perform positively for the rest of the year, albeit at a more modest rate.”

For more information about whether you qualify for an attractive car finance deal please visit our dedicated ‘Will I Qualify’ help and advice section or the apply with Creditplus page on our website.

The final reason could be due to advances in technology. Cars are becoming more fuel efficient, therefore cheaper to run. 2014 has displayed an excellent array of vehicles and although no supercars, luxury saloons or large 4x4s were mentioned amongst the top 10 most popular cars of 2014, a study conducted by Autoexpress confirmed that a lot of the smaller, fuel-efficient vehicles were.

Whilst the above factors have clearly been instrumental in the success of the growth of the 14 plate in March it is important to remember that March on the whole generally performs better than any other month in the financial calendar because new registration plates are issued every six months in March and September thus naturally boosting sales.

Below are 3 of the top selling cars of 2014, which have contributed to the success of the new car sales in March.

In first place is Ford with its unstoppable Fiesta. The Fiesta remains the most popular vehicle in the country for the 5th year in a row and is now the second most successful nameplate ever in the UK. With the diversity of its models it is no wonder that 39,240 new Fiestas have been sold in 2014 alone.

In second place with 24,759 cars sold to date for 2014 is Ford again with its spectacular Focus. Whether you want a car that is big enough to deal with the demands of family life or a compact vehicle with minimal running costs, the Ford Focus can provide just that. Just like the Ford Fiesta you can chose from a range of models starting from the entry level Focus up to the all singing, all dancing ST model.

In third place with a respectable 23,839 cars sold for the beginning of 2014 is the Vauxhall Corsa. Despite the current model having been around for a while it doesn’t seem to be affecting sales. The competitive finance deals available on this model are definitely helping to hold its end and with the new facelift planned for April 2014 it’s looking a bright future.

The full list of the top 10 sellers can be found below.

So what has changed in the last 10 years?

The motoring industry has seen massive changes over the last 10 years especially, with a strong shift to smaller vehicles. Below we have outlined some of the key highlights from 2004-2014 which have shaped the car market that we now operate in.

It is evident that there has been a major shift towards smaller vehicles with a 128% rise in the mini segment since March 2004 and a 7% increase on the supermini segment, whilst the upper medium vehicles saw a 51% decrease, highlighting the overall trend for the smaller more economic vehicle in today’s climate.

Every manufacturer has been working hard to increase fuel efficiency as we steer towards a money conscious nation. The average mpg has improved an impressive 35% from 42.4 mpg to 57.2mpg since March 2004.

The colour white has become highly sought after in today’s car market, signifying prosperity and wealth. However, only ten years ago, the colour wasn’t half as popular, thanks to its association with white goods. Things have changed though, and thanks to companies like Apple who have become hugely popular in recent years, the colour white is now perceived very differently and is now the most popular colour for new cars in 2014, compared to silver which was the favourite of 2004.