Mercedes-Benz is in transition. The staid traditional image of the car-maker whose products wear the three-pointed star is rapidly morphing into something much more up-to-date and daring. The company has just staged the international launch of its new-generation E-Class in trendy Barcelona, where I was among the first journalists invited to drive a bold test route over the spectacular jagged-top Montserrat mountain range. It suited the cars, which are sleek, head-swivelling lookers with driving panache to match.

Why Barcelona? The cheesy explanation was that the Spanish city is home to 20 star-rated restaurants, and the E-Class is a car to “raise the bar for automotive gourmets”, or so we were told by the company chairman Dr Dieter Zetsche, wearer of a droopy moustache that looks as if it was bought in a joke shop. Maybe Germans do have a sense of humour after all.

It was an important launch for the model that is the mainstay of the Mercedes range. Over the lifespan of the new car’s E-badged predecessors, more than 700,000 saloons and 100,000 estate cars have been sold around the world. It also spearheads a torrent of fresh products on the way from Stuttgart, with 13 new models promised between now and 2020. 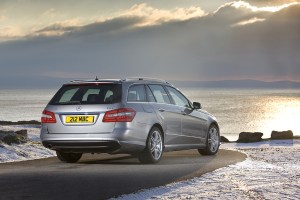 The new E-Class comes in a choice of two faces. You can go for the conservative style of the Elegance, with a sober grille and a star badge atop the bonnet, or you can opt for the funkier Avantgarde, with a more contemporary look and a large black-centred star in the middle of the grille.

Either car comes loaded with opulent kit, including eleven new or improved driver assistance systems to help avoid or minimise collisions. All models have LED headlamps and a little jewel of an analogue clock on the dash. Among the features offered are a split screen monitor that lets the driver view the satnav while his passenger watches a film, a stereo camera in the windscreen that monitors the road ahead, auto-dipping headlamps, and a system that automatically applies the brake if another vehicle crosses the car’s path.

The best-selling model for the UK is certain to be the E220 CDI with a two-litre, four-cylinder diesel engine. It’s a good workhorse in a pretty package and a very adequate performer, but it isn’t as smooth or refined as we’d like. Those who can afford it should trade up to the E350 BlueTEC with a three-litre V6 diesel, which is silkier and quieter. Or if you want to be greener, there’s a diesel-electric hybrid.

At the top of the new E-Class range is the E63 AMG, with a powerful V8 under the bonnet and four-wheel-drive. Its interior décor is a touch bling with lots of bright metal highlighting, but oh what a performer! It has massive punch underfoot and a limpet grip on the bends. It comes with top-notch Bang and Olufsen stereo, but the sound the engine makes is exquisite aural wallpaper to decorate any drive. It’s a car good enough to satisfy the most exacting automotive gourmets.