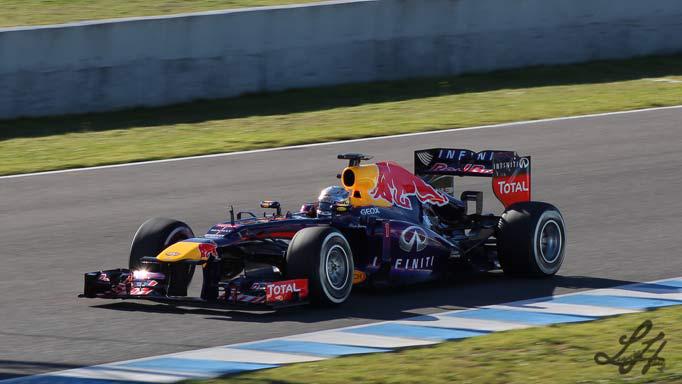 F1 2013 – Our favourite moments and what to expect next year.

F1 2013 – Our favourite moments and what to expect next year.

It’s that time of the year where we have to say goodbye to Formula One for the winter. This year there’s been turbulence, domination and records broken. Sebastian Vettel and Red Bull Renault have made sure that other teams have barely had a chance at that coveted winning podium, and Lotus once again didn’t bother paying Kimi Raikkonen. Webber announced his retirement from F1 to facilitate a move to sportscar racing with Porsche, and English rookie Max Chilton sadly didn’t score a signal point, but still managed to break a record for the most finishes in succession.

Some critics have argued that this season’s Formula One has been boring – excessive safety regulations and the predictability of Vettel’s podium spot left little excitement. Despite this, no one can deny that there have been some defining moments this year that have given fans plenty to talk about – and most of them stem not from the racing itself, but the drivers and their own personalities off the track. Take a look at just some of our favourite moments from Formula One 2013;

1. Not one that’ll be forgotten any time soon, Vettel’s post-race celebratory donuts at the Indian GP (and repeated at the Abu Dhabi and USA GP’s) are fast becoming a trademark of the world champion and we can’t wait to see more next year (providing those pesky safety officers don’t get involved!) 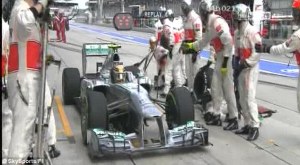 2. It seems there was something in the water at the Malaysian Grand Prix this year, and it certainly had its effect on Hamilton as he pulled into the wrong pit! Rather than carrying on to his pit team at Mercedes, he pulled in prematurely to a confused looking McLaren team, before quickly realising his mistake and moving on. 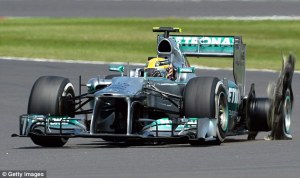 3. The Silverstone Grand Prix saw a number of tyre blowouts – a pretty dangerous thing in the wrong situation. Following the blowouts, Pirelli were investigated and the drivers threatened strike action. Some blame was put on the kerbs at Silverstone, but the resounding opinion was that there was a fault in the new design of the Pirelli tyres bought in for that race. 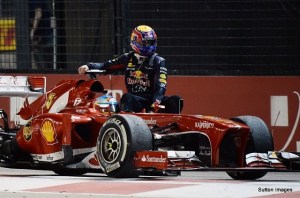 4. If your car breaks down or crashes, it’s a long walk back along the track. If you just can’t be bothered to walk all that way, just do what Mark Webber did in the Singapore GP and hitch a ride with Fernando Alonso. The ride cost him a 10 place penalty, but with Webber leaving the sport this year, he didn’t really seem too bothered. 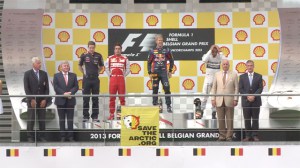 5. Now we know that Formula One doesn’t exactly promote a fight against climate change, but generally, I don’t think it’s a major concern for F1 fans. Obviously though it is for Greenpeace, and so they pulled a somewhat hilarious stunt at the otherwise uneventful Belgian GP this year. The message of the two remote control banners was probably largely ignored, but the hilarity of disrupting oil company Shell’s biggest event was brilliant.

What to expect in Formula One 2014 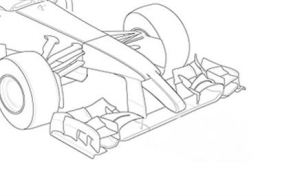 New compulsory guidelines released for next year will mean there will be some significant changes to the way drivers and teams race and operate. The new rules focus on making the cars more eco-friendly and safer, and the general opinion is that this will probably compromise the performance of the cars.

Next year’s cars say goodbye to the 2.4l V8 engines, and will instead have a 1.6l V6 turbo engine, with a maximum of 15,000rpm. The cars will see a drop in horsepower from 750hp to 600hp, with some additional power released from the ERS (energy recovery systems).

Speaking of which, the current Kinetic-ERS are going to be replaced by new systems which should yield around 160bhp for 33 seconds per lap, as opposed to 80bhp for 6 seconds per lap by the original.

Teams are now allowed to use an Electronic Rear Brake Control System so that the extra power from the new ERS is compensated for.

The minimum weight of the cars has increased to 690kgs from 642kgs.

The appearance of the cars will change due to reductions in the nose height and the width of the front wing – meaning that next years cars will not be particularly attractive;

With more drivers than there are rides, and plenty of rookies waiting in the wings to prove their worth, there are sure to be some new faces on the track next year, and some notable absences.

The departure of Mark Webber from the sport opened up the coveted spot at Red Bull, and Daniel Ricciardo, formerly of Toro Rosso, has been chosen to fill his shoes.

Felipe Massa of Ferrari has signed with Williams, as former world champion Kimi Raikkonen makes his return to Ferrari.

McLaren are taking on rookie Kevin Magnussen to race alongside Jenson Button, dropping Sergio Perez who has yet to find a seat for 2014, despite hinting that he is close.

These, along with further moves, will almost certainly change the dynamic of the races, and maybe even facilitate a legitimate challenge of Vettel’s domination.

Critics are yet undecided if the changes to the cars and teams will change the outcome of the races. Red Bull Renault are already behind on the development of next years cars compared to rivals such as Ferrari who began focusing on their new car in September. In addition to this, the risk of replacing experienced Mark Webber with Daniel Ricciardo, who has never driven a top-flight F1 car, is high, pitting the team against Ferrari – who will have two world champion drivers in 2014, and Mercedes, who have former world champion Lewis Hamilton and experienced driver Nico Rosberg. However, it cannot be forgotten that Red Bull still have Adrian Newey – chief engineer creating cars that are seemingly unsurpassed – and the money to support the outfit.

Only time will tell if Red Bull’s domination is set to continue, or if any other teams will finally make a legitimate comeback. We can’t wait to find out – March can’t come quick enough!

If you’re a Formula One fan, you’ll love the prizes we’ve got lined up for our Christmas Advent Calendar – we’ve got everything from driving experiences, to a year’s subscription to Fast Car magazine – just check back everyday and pop your name and e-mail in the box to enter for free!