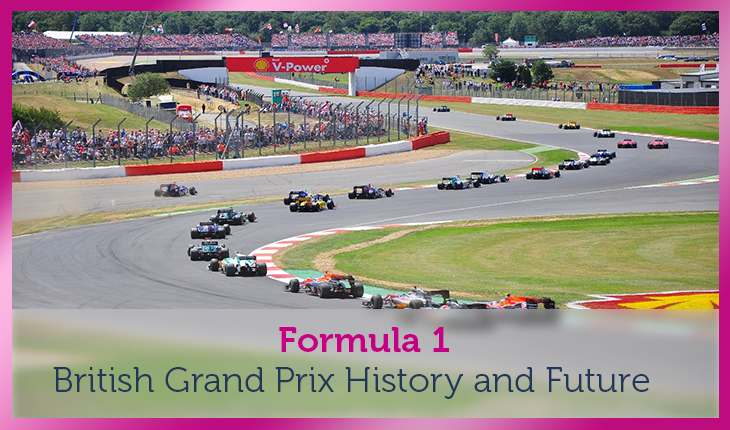 The History and Future of the British Grand Prix

The History and Future of the British Grand Prix

Welcome to this month’s in-depth look at the world of Formula One. With the summer season break taking up the majority of the month, we’ve decided to take a closer look at one of the stories of the season – the future of the British Grand Prix.

Now that the operators of Silverstone race track have activated the break clause in their contract, there is no guarantee that the British Grand Prix, one of the longest, most storied races in F1 history, will exist beyond 2019.

So what better time to take a  look back at this highlight of the British motorsport calendar, its storied history, and what may come of it when the contract comes to an end.

Plus, we’ll have a quick recap of everything that went down at the Belgian Grand Prix at the end of the month.

First held in 1926, the race was established by a British driver named Sir Henry Segrave. He was one of the pioneers of motorsport in the early 20th century. Speed was his passion, and not just racing. Segrave attempted to break land and water speed records during his short life. Like many adventurers and pioneers during this time, health and safety was not really a concern. 1930, shortly after setting a new world water speed record of 200 mph on Lake Windermere, he crashed on his third run, dying from his injuries. 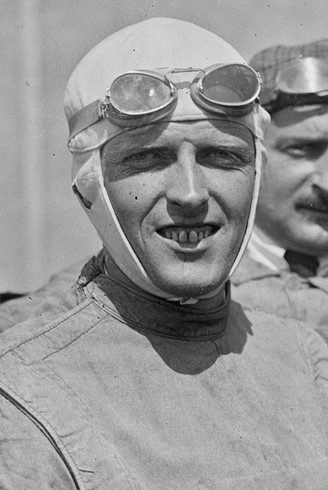 In the twenties, Segrave took part in several F1 championships, winning the French Grand Prix in 1923 and the San Sebastian Grand Prix in 1924.  His success raised awareness of the sport in the UK, and in 1926 the first F1 race was held in the UK at the Brooklands race circuit. 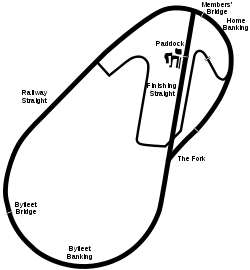 Brooklands was the world’s first purpose built motorsport circuit. First opened in 1907, it held the Grand Prix for the first two years during the European championships that took place in the twenties. When the Formula One championship as we know it began in 1948, Brooklands was too damaged to continue holding the race.

The F1 championship as we know it truly began in the 1950s. Having played host to the first two British Grand Prix events, war damage prevented Brooklands from continuing. 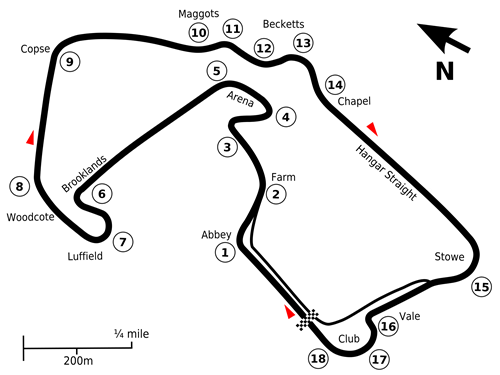 Silverstone has become the home of the British Grand Prix. Having shared the event with Aintree and Brands Hatch across the years, it is now the sole host of the iconic race.

The event was alternated between Silverstone and Aintree during the 50s. In even years it would be held at Silverstone, and in odd years it would be at Aintree. The first race at Aintree was held in 1955 and saw two greats of the sport competing hard – Juan Manuel Fangio and Stirling Moss, both Mercedes drivers. Fangio had won the championship twice before.

Moss was the home favourite, cheered on by the crowd, and was in pursuit of Fangio throughout the race, finally catching him on the last turn of the last lap. Pushing his car to the very limit, he passed Fangio to claim a famous victory. Fangio was not one to give up victory easily, so the last lap loss was a surprise. Moss reportedly asked Fangio, “Did you let me through?”. Fangio replied, “No, you were better than me on the day.”

Fangio would go on to win the championship that year. Moss would never win an F1 title, going on to be described as the greatest F1 driver never to win a championship. 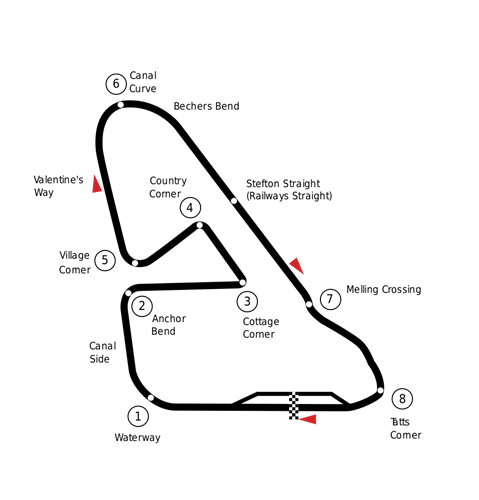 More famous for horse racing, Aintree is also home to one of the better race circuits in England. Aintree would prove to be a significant track in many famous F1 drivers’ careers. Stirling Moss, Jack Brabham, Jim Clark, and Tony Brooks would all claim famous victories on this circuit.

The Golden Years of Motorsport

When Aintree stopped hosting the Grand Prix in 1964, a replacement track was sought. Brands Hatch proved to be a popular choice amongst drivers and fans. Unlike the rather flat Silverstone track, Brands Hatch had cambered turns and elevation changes. It made for two different challenges as once again the Grand Prix alternated between tracks. 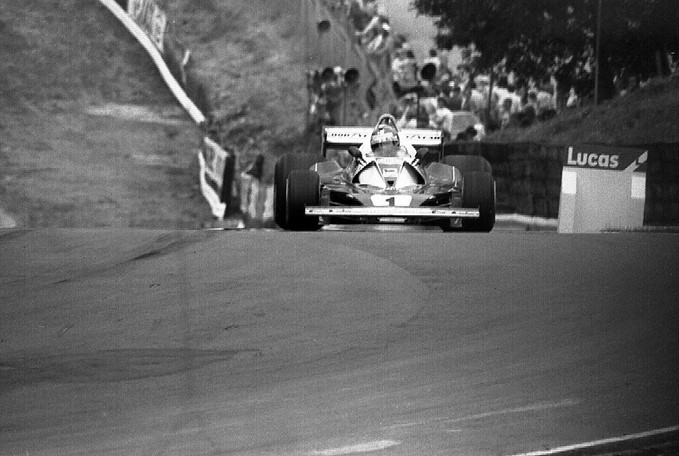 Many famous battles took place during this shared period, with drivers like Jackie Stewart, Niki Lauda, and Keke Rosberg all claiming famous victories. It was also home to one of the first real superstar performances by Alain Prost, who would go on to win a joint-record five British Grand Prixs, a record shared with Jim Clark and, since 2017, Lewis Hamilton. 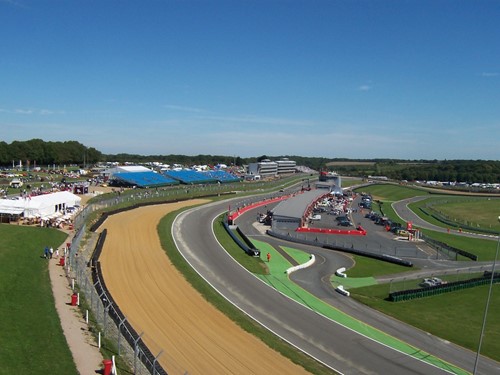 Perhaps the only track that can rival Silverstone for popularity, Brands Hatch holds a special place in many British racing fans’ hearts. It was the track where Nigel Mansell won his first ever Grand Prix, and was described by Gerhard Berger as his favourite track of all time.

Silverstone On Its Own

From 1987, Silverstone became the sole host of the British Grand Prix. This change coincided with Nigel Mansell’s rise to prominence, and also one of the most famous races in F1 history. 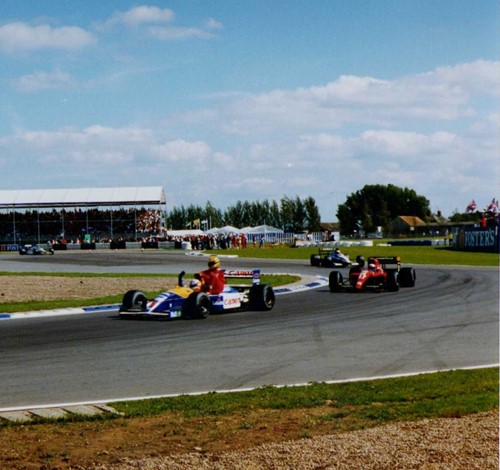 In pursuit of Nelson Piquet, Mansell was looking likely to catch the great Brazilian driver. But a problem with his wheels meant Mansell had to make an unscheduled pit stop. When he rejoined the race, he was 29 seconds behind Piquet and victory looked impossible. But Mansell would have the race of his life, breaking the lap record 11 times to close on Piquet. On the last lap of the race, Mansell managed to sell a dummy and outmanoeuvre Piquet, surging past him to claim a famous victory.

The Future of The British Grand Prix?

With its history so entwined with the Silverstone race circuit, it’s little wonder that British racing fans reacted to the news of the track owners activating the break clause in their Formula One contract with despair. How can one of the most popular races on the calendar, with attendances across the weekend dwarfing the vast majority of other Grand Prixs, become so unprofitable?

Here’s a look at the parties in play:

British Racing Drivers Club (BRDC) – The operators of Silverstone race track. In 2009, they signed a 17-year contract to host the British Grand Prix, beating off competition from Donington Park to continue hosting the event. Having sustained heavy losses over the previous years, the BRDC decided to activate their break clause, meaning the last race will be held in 2019.

Liberty Media – The new owners of Formula One, they bought the controlling stake from Bernie Ecclestone for $8 billion in January of this year. Having raised their concerns over contracts signed by Ecclestone in the past, they are looking to improve the commercial side of the sport going forward.

So what happens now?

It appears that the British Grand Prix can go down one of three routes – a new contract is drawn up between Liberty Media and the BRDC with more favourable terms, another venue will step in and take its place, or the British Grand Prix will be removed from the calendar, replaced by another better-funded venue, most likely from one of the oligarch states.

If not Silverstone, where?

With other circuits like Brands Hatch and Donington Park unwilling to take on the huge financial burden of hosting, one of the more intriguing prospects raised has been the potential of a British Grand Prix held on the streets of London.

Whether this can work from a logistical or sporting point of view remains to be seen, but the Formula E championship has held several successful races in the capital, albeit at a far slower pace. Recent F1 events in London have attracted big crowds. The important question, whether you like it or not, is will it make enough money to keep Liberty Media happy?

The UK motorsport market continues to be one of the most valuable for sponsors and as long as Lewis Hamilton is dominating the sport, it is very unlikely that the British Grand Prix will be gone for good. Expect a lot of back and forth between both parties before a compromise is made. At least, that’s what all motorsport fans will be hoping for before the 2020 season comes into view.

Another famous venue played host to Formula One as the Belgian Grand Prix signalled the end of the summer break. Spa is one of the most exciting tracks on the calendar. Hamilton’s victory was anything but, as a strong, competent drive meant Hamilton closed the points gap to Vettel to just seven points.

Lewis Hamilton reveals how smart race tactics enabled him to keep Sebastian Vettel behind him at #BelgianGP restart https://t.co/34uzkR30L3 pic.twitter.com/sKt9ixkVF5

It was a professional drive by Hamilton who led from the start and comfortably held off Vettel, despite safety cars and deteriorating tyres, to win by just over two seconds.

The real drama happened further down the field as two drivers of the same team collided. Ocon and Perez in their pink Force Indias collided on lap 28, when the French driver tried to overtake the Mexican. Instead of letting him past, Perez closed the gap, forcing Ocon into the wall, with both cars suffering damage. A tweet from Ocon claiming Perez was trying to kill him was quickly deleted, but bad blood continues to boil between the two drivers.

Watch as the Force Indias come to blows yet again in 2017 ➡️ https://t.co/iCFOKZ8mqE pic.twitter.com/MFtli77cNP

A final word on Alonso, who was forced to retire once again after finishing sixth at the previous race. When things look to be on track at McLaren, an engine failure or issue quickly puts them back to square one. Set to start at the back of the grid at the next Grand Prix, what reason does Alonso have to continue persevering with his sub-standard car when more lucrative opportunities (Indy 500 for one) lie abroad?

All the news, drama, and talking points from September, as we look back at the Italian, Singapore and Malaysian Grand Prixs.