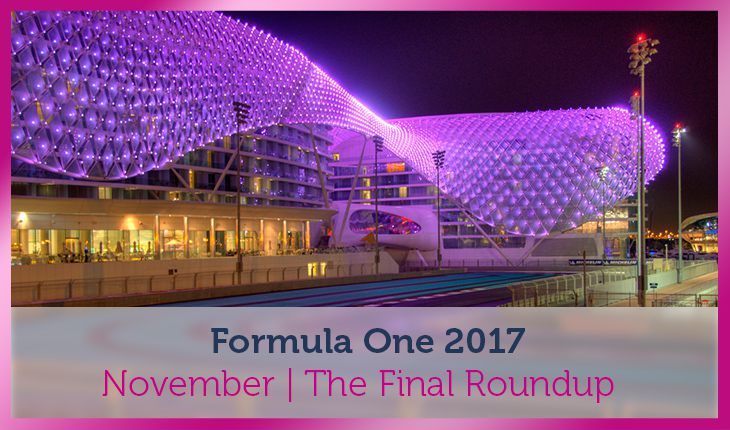 And so the Formula One season comes to a close. After twenty races and a fierce battle for the title between Lewis Hamilton of Mercedes and Sebastian Vettel of Ferrari, the season was decided with two races to spare. So, what happened in the final month, as the calendar paid visits to Brazil and Abu Dhabi? There were some intriguing results, potential omens for 2018, and one sad farewell to a F1 favourite.

Let’s take a look back at the end of the season, and also the moments that led Hamilton to his fourth world title.

Having seen his attempt at the title fizzle out over two painful months, you could be forgiven for thinking Vettel had a point to prove as the season made its way to South America. So, it was no surprise to see Vettel take hold of the race and claim his fifth victory of the season. But once again, the exploits of Hamilton overshadowed what should have been a consolation for the German driver.

Let’s start with Vettel. Having qualified second behind Bottas, he took the lead from the start and never looked in doubt of finishing anywhere but on top of the podium. It was a reminder of the German’s speed and skill, and perhaps tinged with regret at what could have been, had Vettel and Ferrari not lost their way in September and October.

For Hamilton, you could think that he crashed in qualifying on purpose. With the pressure of the championship battle now lifted, perhaps he could focus on what he loved most – racing. So, having started at the back of the grid, he had a whole field of cars to get through to win. And the crazy thing is, he almost did it.

By lap twenty, he had moved up to sixth position, having made his way through the slower cars and drivers of the field. At lap thirty, he was up to pole position, albeit as the front runners all pitted.

Hamilton managed to manage his tyres all the way up until lap 43, hoping a fresh set would allow him to push on for a podium finish. In the end, he ran out of time and couldn’t quite catch Raikkonen in third position.

"It was fun, it felt like reminiscent of my karting days - starting at the back," Hamilton told Sky Sports. "I messed up yesterday and put myself in the worst position. I was quick enough to win this race. Waking up this morning, my goal was to redeem myself and do the team proud."

It was a truly impressive display of skill, but not the first time Hamilton has recovered so well from the back. If Vettel is all about maximising speed, then Hamilton is the driver for overtaking and aggression. With both drivers now holding 4 world championships, next season could truly be something special.

Brazil says farewell to a favourite

The Brazilian Grand Prix was the final time the passionate home crowd got to see Felipe Massa behind the wheel. The crowd at Interlagos love a home driver, and Massa is extremely popular.

The career of Felipe Massa is one of two key moments. The second of these, when he was struck on the head by a loose piece of debris, almost cost him his life. To see him back behind the wheel again was a sight that would make any F1 fan happy.

But it’s the first that would have many of us wondering – what if? It’s also closely tied with the start of Hamilton’s glorious career. Go back to 2008 and a hotly contested season between Massa and Hamilton. The last race of the season on home soil, and Massa needed a win to have any chance of claiming the title. It all looked as if it was going Massa’s way. He crossed the finish line in first, and, with Hamilton stuck in sixth place, started celebrating the world title. But there was still time for drama. Hamilton managed to overtake Timo Glock in fifth place, meaning he could secure a position to beat Massa by a single point.

What would have happened to Massa if he had won the title? Would he have managed to push on and add more titles? Instead, Ferrari would not win another title since this close call, with Red Bull and Mercedes being the teams to dominate the sport.

The final race of the season. With everything seemingly resolved – from the driver’s championship down to next year’s racing line-up – it was an anticlimactic race with the action to match. But the winner was one of the season’s forgotten men – Valtteri Bottas.

Playing the number two driver is not something any competitor enjoys – just ask Mark Webber how he felt at Red Bull. For Bottas, stepping into the shoes of Nico Rosberg was never going to be easy, and anyone expecting him to be competing for the title like his predecessor was deluded. But, quietly, Bottas has had a strong debut season.

Hamilton and Vettel both wanted to finish the season with a victory – one to reassert their dominance, another to lay down a marker for the season ahead. Instead Bottas came along to spoil the party. Having qualified in first position, he wasn’t going to lose it from the start again.

Bottas started well and, by lap 20, he was 2.5 seconds ahead of Hamilton. When he came into pit, Hamilton tried to push on a little longer, but his tyres didn’t have the grip. Bottas came back to secure pole position, setting a few fastest laps to help get back ahead. Hamilton did manage to get close on a few occasions, but in the end, the gap stayed at 1.5 seconds for the rest of the race, as Bottas didn’t make any mistakes for Hamilton to capitalise on.

The dominance of Mercedes in the final race of the season is a true reflection of how the constructor has performed across the years. With 12 wins and 15 poles in total, Hamilton and Bottas have proved that Mercedes are the dominant force in F1 once again.

But will this lead to Bottas having a say in next year’s championship? With Vettel forced to take the easier option on his engine to ensure Bottas didn’t pip him to second place, the chance is there for Bottas to throw his name into next year’s mix. The question is more with Ferrari. Can they find the reliability they need to push Mercedes for that title next season?

Next season sees a lot of changes to the competition, most notably the introduction of the halo protection system. But another striking change was announced after Abu Dhabi – a change to the Formula One logo.

The reaction has been mixed to say the least. It seems a Marmite situation, where you either love the new futuristic design, or hate the change and how unnecessary it seems. The F1 logo went viral earlier this season, with the negative space forming the number one a popular design choice:

The new design had two vocal critics – Lewis Hamilton and Sebastian Vettel. “The old one was iconic, and the new one isn't,” Hamilton said after Abu Dhabi. Vettel put it far more simply: “I liked the old one better.”

Perhaps the change is another move to distance the new Liberty Media owned championship from the reign of Bernie Ecclestone, whose management first introduced the iconic F1 logo.

Moments that made the season

Hamilton will look back at 2017 as another dominant season. This is despite the challenge that Vettel put up, which put him close to spoiling the Mercedes party. So what were the key moments of the past season?

With Rosberg out of the picture, all eyes were on who would challenge Hamilton and make the championship interesting. Vettel laid down an early marker.

The very next race, Hamilton dominated from start to finish, with Vettel unable to catch in a wet and wild race.

The season looks to be turning in Ferrari’s favour as Vettel wins his third race, stretching his lead to 25 points.

A chaotic and incident packed race saw Vettel drive into Hamilton on purpose. Despite this, Vettel remains 14 points ahead after eight races.

Hamilton wins his fifth British Grand Prix, putting him level with the race record of Jim Clark and Alain Prost.

Hamilton wins the first race after the mid-season break, closing the gap to seven points.

After Belgium and Italy, Hamilton wins his third race in the row, turning September into a miserable month for Vettel.

Forced to retire from the race, Vettel could do nothing but watch as Hamilton took a big step closer to victory.

A look ahead at the driver changes, new safety rules, and how Liberty Media are looking to change Formula One – for better or worse?