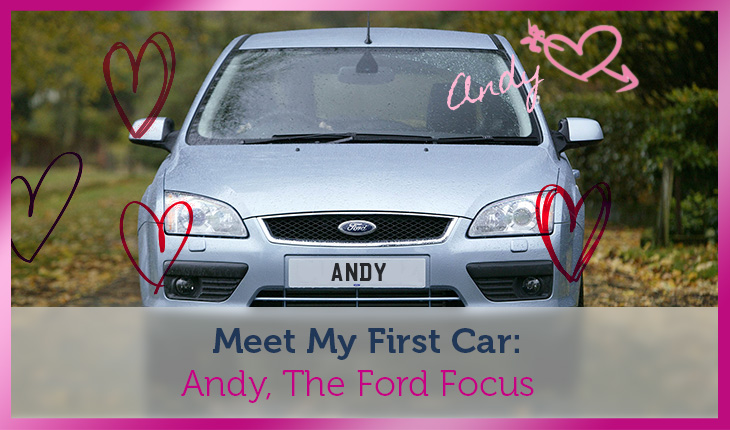 My first car was a 1.8L 1998 Ford Focus. I shared it with my dad, as I did not do much driving in my first year, as I was still at college. Those of you that live or work in Bournemouth, will know how expensive it is to park along those busy streets around the Lansdowne area. Additionally, I had to factor in the cost of quite a lot of fuel, as I was venturing from the small seaside town of Swanage (up to an hour-and-a-half away depending on traffic and the time of day). Alternatively, you could go over the chain ferry but that would cost £8.60 a day. So, the choice was simple; I rode the bus!

The polite, sensible thing to do when you get a new car is to name it. So, this is when I got creative. The last three letters that were on my number plate were DRU, which sounded like the name Drew or even as fancy and sophisticated as Andrew. However, I did not get that sophisticate vibe from a car that quite often had a cement covered wheelbarrow balancing on the back seats (my dad's a builder btw). So, my rarely clean car was named Andy.

I found that the Focus was quite a large car for a new driver like myself. It was quite a powerful engine to start off with, alongside a very large body. Due to the size of my trusty old steed I found it a task to find a parking space that I would confidentially hold up the traffic (approx. 2 minutes, felt like 2 years) to attempt to maneuver Andy into.

The unfortunate problem that Andy and I came across was getting me insured to be legally allowed to sit in his grey retro patterned seats. Because, he had such a large engine, for a new driver it would have cost me an arm and leg to be the main driver. This resulted in me becoming a named driver and sharing most of my journeys belting out some Bruno Mars with a cement bag in the passenger seat. Thanks, Dad…

Because of this, I didn’t receive a no claims bonus for that first year, which I came to realise is very important. A no claims bonus reduces the cost of your insurance for the following year quite significantly.  Note that down.

My Andy was so retro it had a snazzy cassette aux cord that I became quite acquainted with, as it was an essential if I wanted to enjoy some bangers on my journey. Who knew those even existed? Turns out they were invented in 1988, and I still had one in my first car 29 years later. I can still hear the spools turning in the background of Jay-Z. What a time to be alive.

Unfortunately, Andy did not survive the 2017 MOT, so our many many adventures together came to an end. Andy was towed through the golden gates of the scrap yard. *Reaches for the tissues*

However, that meant there was room in my life for a new Andy. One that was shaped rather like a very large Jelly Bean. So that’s what I named him. My Jelly Bean is a 2006 dark metallic blue Ford KA, with a 1.3L engine. It’s one of my most prized processions ever, as it was all MINE! I didn’t have to share it with a cement bag, wheelbarrow or spirit levels that occasionally made an appearance! Just my continuous supply of cherry Jelly Belly air fresheners. My sparkling clean Jelly bean is just perfect, and no one can knock it!

I found that my Jelly Bean costs me half as much as my beloved Andy – it only costs me £40 to fill up my tank. MAKE IT RAIN!

I think that also comes down to it not weighing a lot for a car. However, the small engine does come with a price. My Jelly Bean does not drive as well on dual carriageways as Andy did; the high speeds really push his 1.3L engine to its limit. This doesn’t necessarily suit my crazy lifestyle filled with constant driving; the A38 is not my friend. This seemed no problem in my 1.8 Ford Focus, so maybe I should take that into consideration when buying my next car.

Although I no longer have to make space for half a building site, I find that with the KA I struggle to fit my friends in, as its unfortunately only a 4-seater. However, conveniently that is my get out of jail card for being the designated driver…BONUS!

But most importantly my two precious pooches, Angus & Burt are still small enough to hitch a ride in my cherry-scented Jelly Bean to and from Upton Country Park, or anywhere else that might take our fancy.

The world is our oyster!

Looking for an Andy or a Jelly Bean of your own?

If you are currently shopping for an Andy or Jelly Bean of your own, you can apply for car finance today by filling out our simple, two-minute, no obligation form or call our friendly customer advisors on 0800 1777 290.

Go through our extensive car search or try out our armchair Find, Fund & Deliver service to have your new set of wheels selected, financed and delivered straight to your door.