Formula One – Is it in the blood?

Formula One – Is it in the blood?

If you are a bit of a Formula One aficionado you will already know what this piece is going to be about, the title should give it away. Those of you who are less interested in the sports heritage, until now at least (I’m guessing you are interested in it now as you are reading this?), filter in single file, find your seat and open your books to page forty-seven, you are about to get a history lesson. Don’t worry; it will be more like one of those lessons where some kid wheels the TV in, boy those were the best. Anyway, enough small talk, let’s begin.

I want to talk a little bit about when a single family produces more than one Formula One driver. It happens more often than you might think! Bearing in mind that Formula One is the current pinnacle of motor sport, opportunities don’t exactly come around that often, so the idea that more than one would go to the same family seems very odd.

Yet it happens quite frequently and some of those families have been extremely successful, I mean really, really successful. So this had me wondering, is Formula One in the blood? Are there some aspects of a persons DNA, the make up of their body and mind if you will, that makes them better at driving very fast around a track? And if this is the case, does that mean that some families are far more likely to succeed in motor sport as they share the same DNA? Or is it just that some doors open that much easier when you already have a successful name?

Let’s start by looking at one of the most successful Formula One families of them all, the Schumachers.

Even if you aren’t an F1 fan you probably know who Michael Schumacher is, even if you aren’t a motor sport fan at all chances are you know who he is. You probably know his brother too, Ralf Schumacher, he wasn’t exactly a slouch behind the F1 wheel either. They are the only siblings ever to have both won Formula One races.The duo won 97 races between them and seven world titles. That being said, 91 of those wins were from Michael and all seven of the world championships belong to him too. Still, it’s a family achievement!

Both of them are extremely talented drivers and if Ralf was around during any other time he may well have been a strong contender for the F1 title but his brother was just too good. It does however make a strong argument for the F1 in the blood side of things. It’s not as if Michael was the father opening doors for Ralf that would be closed for other racers, Ralf was a successful driver in his own right. He never had the car that Michael had though, this was during Ferrari’s unprecedented dominance and Ralf’s machine was no match for the Ferrari.

If you need convincing that he was an incredibly skilled driver just remember Ralf beat his older brother at Montreal for a Schumacher one-two despite being in a slower machine. So for these two it was clearly in the blood, there were no coat-tails to hang on to on the way to the top for them, they had the skill and they used it.

Next up it’s Graham and Damon Hill who are currently the only father son duo to have both been Formula One world champions. That is quite an accolade. Graham Hill has an impressive stat sheet, with fourteen wins and two F1 World Championships he would be a tough act for anyone to follow. His son Damon Hill was more than up to the task though and over his four years in F1 managed to claim 21 wins of his own and one world championship. You might be thinking that with a famous father, Damon’s route in to F1 was an easy one. This was not the case as Graham was killed in an accident when his son was just 15 years old, he didn’t even get in to a racing car until he was 23. It was no easy ride for him.

So the Hill family legacy seems to fall in favour of the ‘it runs in the blood’ argument doesn’t it? Two awesome Formula One drivers, father and son, it’s fairly strong evidence. However, there is more to this story, Damon’s son, Josh Hill was also a racing driver. He looked promising too, starting in the Junior Formula series, can you imagine three generations of F1 champions in one family?! It was not to be for young Josh though; he made his way to Formula 3 and then retired.

So did the magic DNA run out for Josh? Did the doors to motor sport open for his name, only to be left wanting? Or was the pressure of two previous F1 champs in the family just too much? Just think about it, those of you with an older sibling or a successful mother/father, the pressure to do as well as they have can be crushing. Things that would be successes to a normal family simply do not shine as brightly.

The next Formula One family are the Piquets, Nelson and Nelson (Jr).

As many will know, there was a huge scandal surrounding the Piquets, specifically Piquet Jr in Formula One. We aren’t really here to discuss that but I will give a very brief background as it does help with the story. At the 2008 Singapore Grand Prix, Piquet Jr crashed his car, blaming it on a simple driver error; however there was more to the story. Later in 2009, allegations surfaced that Piquet had been told by his pit crew to deliberately crash his car in order to help his teammate Fernando Alonso. Renault claimed this was nonsense and filed suit again him claiming false allegations and black mail. Anyway, long story short, Renault had asked him to do it, they were in the wrong but the damage was done and Piquet Jr’s F1 career was over.

The thing is, his career wasn’t exactly blossoming anyway, before the scandal he was being publically told by Renault to improve. So this one might be one in the ‘your name opens doors’ column as his father was and still is one of the most successful Brazillian drivers. However, while he Formula One career did indeed end, this was not the end of his racing career so hold your horses on that column tick!

Piquet Jr now races in Formula E and is currently fifth in the championship. Does this mean the skill was there all along? Or is it simply that his father helped him in to Formula One and the experience and training received there means he can now compete in other slightly less competitive series? A difficult one to come to a decision on definitely, we might have to leave this one open to speculation. 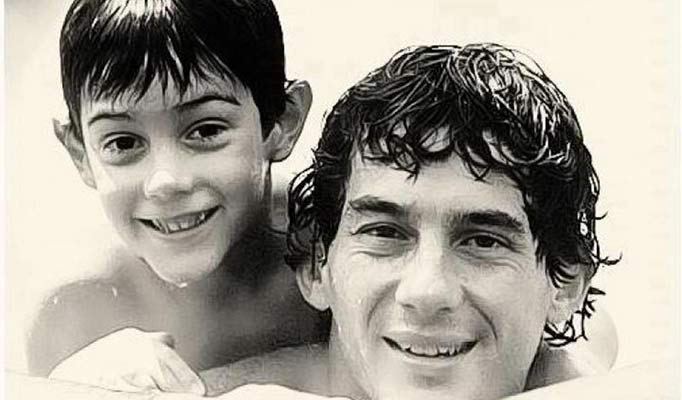 The final family I’d like to look in to are the Sennas. One of the most famous names in Formula One. Ayrton Senna is an F1 legend, 41 race wins and three world championships is no mean feat but it’s his sportsmanship that also made him the legend he is. Unfortunately his career was tragically cut short when he crashed and sadly died racing at Imola in 1994. His death was not in vain though, as it spurred on one of the sports biggest drives for safety and changed the face of F1 in to what it is today.

This isn’t a father-son or sibling story though, it is in fact Aytron’s nephew who became the successful racer. Bruno Senna was had plans to become an F1 great himself but unfortunately the death of his uncle forced him to put his dreams on hold. He did eventually get back behind the wheel and showed promise too in the GP2 series where he came second! His awful luck followed him though after a possible drive with the Honda team was ruined when they withdrew from F1 and returned as Brawn. He eventually made his debut in to Formula One with Hispania Racing and actually replaced Nick Heidfield in the Renault team a year later.

He then left Formula One to race for Aston Martin in the World Endurance Championship and now he races in Formula E alongside Piquet Jr! Clearly he had some skill otherwise he would never have made in to Formula One in the first place but with a name like Senna you are bound to get some opportunities others might not. This is another difficult one because while he certainly had some skill, his Formula One career wasn’t particularly astounding. Was this down to the interruption forced on him by his family after his uncle died? Was there too much pressure again to live up to one of the most legendary names in F1? Maybe, we will never know that.

Looking over all of these examples it is difficult to come to a conclusion with such mixed results. Some families do very well, with successes over more than one generation, some not so much. I am normally a cynic when it comes to matters like this, I don’t particularly believe that DNA makes much of a difference and maybe with Formula One this is true. There simply are not enough cases of more than one very successful Formula One racer within a family to make me believe F1 is in the blood!

However, I find myself thinking that maybe motor sport is. F1 is the pinnacle; the very top of the motor sport food chain, not everyone can survive there. That doesn’t mean they can’t be successful in other disciplines though and we have seen examples of that. Ultimately I think we have to be realistic and say you can’t pass on the ability to compete in Formula One but you I absolutely believe some families just do motor sport better than others. There, that’s my absolutely unscientific view on the situation. If you are so smart why don’t you tell me yours? Eh?