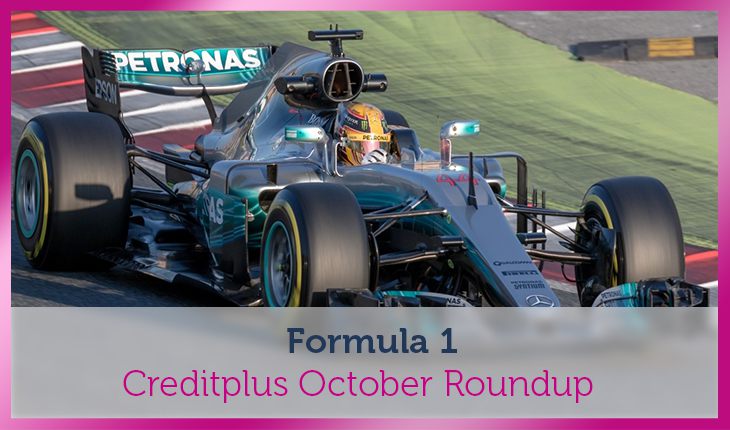 October was crunch time in the Formula One championship. Hamilton had overcome the bumpy spell that saw Vettel retake the lead to dominate the championship since the mid-season break. Entering October with a healthy lead, it would take an unlikely run of results to prevent Hamilton from claiming his fourth world title.

Verstappen was the surprise winner in Malaysia at the end of September/start of October, setting things up nicely for Japan, the USA and Mexico. So how did this season and, for Hamilton, career-defining month play out?

Home of some of the great championship deciding races (think of the titanic battles between Prost and Senna), would Suzuka once again provide an interesting twist in the title chase? Unfortunately for race fans, no. But for Hamilton, his victory combined with Vettel’s early retirement, meant that he was 25 points closer to claiming the title.

For Vettel, the race was over within the first four laps. From the start, a lack of power and pace meant it was clear he would not last long. Having started in third, he had dropped down to sixth by the end of lap one. Three laps later, he was called into the pit – handing the initiative and the championship to Hamilton.

There was no looking back from there and Hamilton led the race to victory, with Vettel forced to play a chasing game until the checkered flag.

The US fans might have been hoping for more of a battle, especially with the new owners being Americans and looking at expanding the sport’s popularity in their home country. But the drama came from the chasing back, with champions past and (potentially) of the future, making the majority of the race’s excitement.

Vettel’s pursuit of Hamilton soon played its toll on the German’s tyres. With Bottas, Raikkonen and Verstappen closing in on Vettel, the decision was made to pit him for a second time so that he could get fresh tyres to keep ahead of the chasing pack. A sign that the threat came from behind rather than the front of the grid.

It was another race where Verstappen’s youth and exuberance proved to be both a benefit and a problem. Having battled his way from sixteenth place to overtake Raikkonen on the final lap and claim third place. But he was later penalised for going off track and was relegated back to fourth place. Needless to say, Verstappen was not happy. Interviewed after the race, he said: "It's just one idiot steward who always makes the decisions up there against me."

It was a different story for Ricciardo, who was forced to retire with engine failure on lap 15. And poor Alonso. Despite having agreed to race again for McLaren next season, he still has to suffer his way through the rest of the season with the poor Honda engine, and retired once again, despite being on course for a point’s finish in seventh or eighth place. The only encouragement is that his racing skill is still very much present.

And so to Mexico. The equation was simple. Hamilton needed to finish fifth to win the world title. Vettel needed a miracle – either Hamilton not to finish, him to win, or best case scenario, both. So what would happen? Drama, the sort of season-defining drama that race fans love.

The drama happened at the very first turn. Vettel had qualified in first, with Verstappen in second and Hamilton in third. As the lights went out, Verstappen was soon wheel to wheel with Vettel and, by the first turn, Hamilton was also side by side. Verstappen’s aggressive driving allowed him to push out into the lead. And as he closed the gap, Vettel and Hamilton collided. Vettel suffered some front wing damage, but Hamilton suffered a puncture, leaving both drivers at the back of the field and forced to fight their way to the front.

For Hamilton, this was not ideal. For Vettel, it was a slim chance of pushing the championship battle to the next race in Brazil. Battling through the field, he knew that a win would put the pressure on Hamilton, who was finding it much more difficult to make progress.

Could Vettel do enough?

In the end, Vettel finished a valiant fourth place. Doing a lot, but not quite enough to push the title fight to Brazil. Hamilton finished in ninth, the result of a poor race but not that he will care one bit.

Despite a mid-season wobble, Hamilton has put in the performances that mark him out as one of the greatest F1 drivers of all time. Even though the season was close up until September, the stats show that there would only ever be one winner.

Hamilton won nine races to Vettel’s four, with 11 pole positions to Vettel’s four. Reliability proved to be another key factor, as Hamilton finished every race and in the points, whereas Vettel was forced to retire twice.

The result sets things up brilliantly for next season, as Hamilton joins Vettel on four world titles, meaning both will be competing to claim a fifth, a victory that would move them up to second on the all-time list.

On course to be the greatest?

Hamilton has broken records ever since he burst onto the scene back in 2007. Having surpassed his idol Ayrton Senna on almost every metric, he surely only falls behind Michael Schumacher in the ranking of Formula One drivers.

His four titles put him level with Vettel and Alain Prost, one ahead of the (former?) greatest British racing driver Jackie Stewart. Jim Clark and Graham Hill are one place further behind on 2 championship wins, with several others claiming a sole championship victory.

"We're all going through different things. But I truly believe that we're all destined for greatness" - @LewisHamilton#4TheTeam #F1 pic.twitter.com/H7JrsEwa7Q

So does that make Hamilton the greatest British F1 driver? If it was down to stats alone, then it would be no contest. Formula One has changed so much over the years, it’s impossible to compare drivers now to the daredevils of the sixties, or the hard-drinking heroes of the seventies.

The only way we could ever know who was the greatest would be to have all our heroes on the track at once. But that can’t happen. So we should just be grateful that we have a driver as skilled, determined and fast as Hamilton hoisting the Union Jack as he stands on top of the podium again and again. Here’s to seeing it happen again, and again, and again!