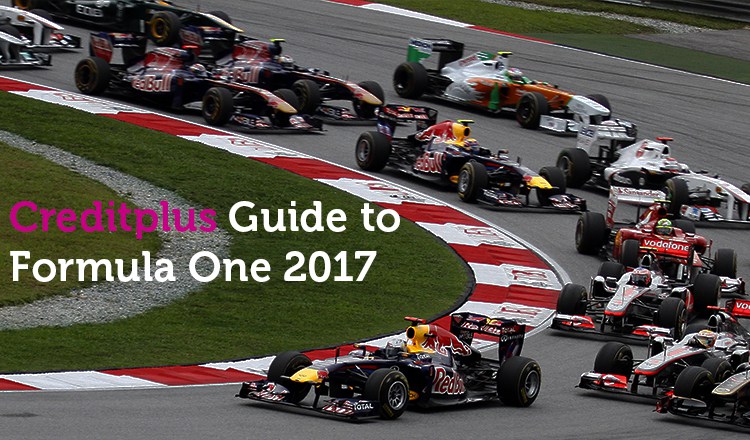 Formula One | The Creditplus Guide to the 2017 Season

Formula One | The Creditplus Guide to the 2017 Season

Yes, it’s back, the new Formula One season is right around the corner, and it’s so close you can almost smell the burning tyres and hear the roaring engines.

Formula One fans from across the world are eagerly awaiting the return of the action-packed motor sport to our screens, with all eyes on Melbourne for the first practice race on Friday 24 March 2017. However, the new season is returning with a few alterations so we have decided to fill you in on everything you need to know in time for the season start.

The 2017 season of F1 has witnessed one of the largest shake-ups since changes to 2014 regulations, with the focus being on bodywork and tyres. With both components becoming wider this season, downforce and grip will be improved, increasing their speed with an expected reduction in lap time of approximately three to five seconds.

The tyres this season will be about 25% wider than those in 2016, as the rear with increases from 235mm to 405mm, and the front width rising from 245mm to 305mm. The wheel rim size will remain the same (13 inches), however the tyre’s diameter will be slightly increased.

For the new season, the rear wing height has been made smaller, now to a maximum of 800mm instead of 950mm. However, the diffuser has increased in power due to a greater height of 175mm as opposed to 125mm, and a width of 1050mm, up from 1000mm.

Another increase in size comes from the bodywork, which is now wider with a maximum width of 1600mm instead of 1400mm.

The weight of the finely tuned F1 cars have now been increased from 702kg to 722kg (plus tyres).

Changes to the power units

In order to prevent drivers from stockpiling spare power unit elements during the race, there has been a change in the rules. This season, if a driver decides to introduce more than one of a power unit element that is subject to a grid penalty, then only the element which was fitted last can be used at following events without penalty.

Furthermore, adjustments have been made in order to reduce the power unit costs, meaning that the supply for customer teams is guaranteed and the performance gap between engines is minimised:

Unlike in previous seasons, if a safety car is required for the beginning of a race due to wet weather, then a normal standing start will occur after the track is deemed safe to race on. This will ensure that the safety car returns to the pit lane and the racing cars can assemble on the grid, ready to start.

To allow easy recognition of drivers whilst they race, all drivers must continue to use the same helmet design throughout their races. However, drivers can use a special livery at an event of their choice.

If all the above is a little hard to digest, watch this short video clip for a visual tour of what to expect from the 2017 changes:

Fancy a change yourself?

Whilst we are on the subject of changes in 2017, why not consider making a few changes to your ride yourself?

Whilst me may not be able to supply you with the g-force defying supercars (or the driving skills) that the F1 drivers possess, we can source you a wide variety of vehicles through our extensive car search.

Get in touch with our Customer Advisor team today on 0800 1777 290  or apply by completing our simple, 2-minute application form, and get the best finance deal for you.