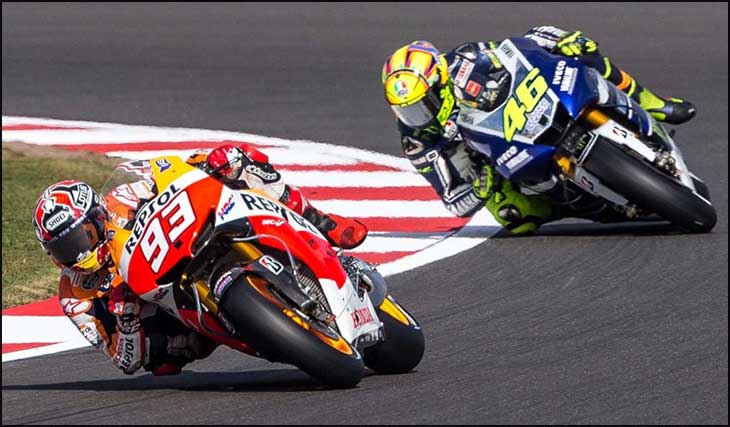 MotoGP Roundup – The Brits Are Back!

MotoGP Roundup – The Brits Are Back!

The bets are off!

In a sport so heavily dominated by a few exceptional riders it’s great to see others getting through to take some victories, including our own Cal Crutchlow. And with a record eight different consecutive race winners, clearly the new tyre and electronics changes have made for a far more competitive championship. Last eight race winners:

Of course the weather has played its part in several of these races, but no one can deny that the resulting winners were worthy victors. In fact Cal followed his first victory with a pole position qualifying result and a second place finish at a dry British GP. In the latest San Marino GP, Dani Pedrosa took a confident win following one of his most difficult seasons to date, and whilst only qualifying in 8th position. Backing a winner has never been tougher with this level of unpredictability where even the experts are afraid to predict a winner. Dorna (commercial rights holder of MotoGP) have worked hard over recent years to make incremental changes that will bring fans better quality racing whilst enabling lower budget teams to compete on the grand stage. The past eight races have certainly justified all their hard work and with full capacity crowds turning up for the races, MotoGP looks to be as popular as ever.

Is Crutchlow back to his former winning ways? 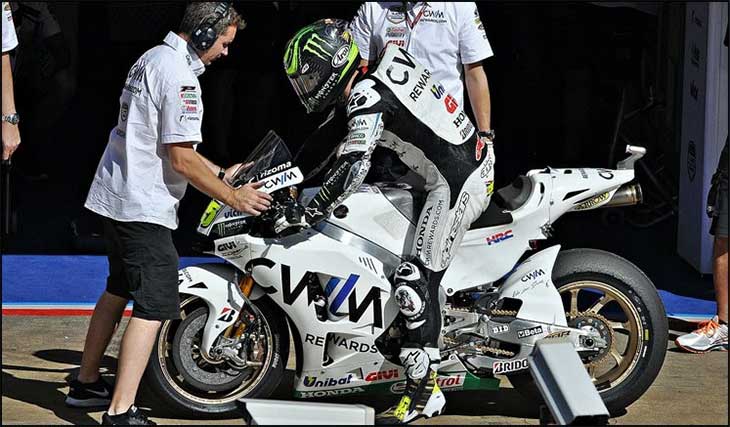 Since Cal joined the MotoGP paddock in 2011 I have reserved my confidence in his ability. The manner in which he dominated and won the fiercely competitive World Supersport Championship in 2009 drew my attention to the former BSB rider. He made it look so easy as is common with all the greatest riders (with the exception of Marc Marquez!), and it was clear to me how important it is for a top quality rider to have a bike that they feel truly comfortable with. Riding a two wheeled 200mph+ rocket and making it look effortless whilst trying to stay alive is a clear indicator that the rider feels ‘comfortable’.

I knew it would be tricky for Cal jumping straight on to a MotoGP bike from a superbike, and I was hopeful when he showed some early promise, with even the likes of Valentino Rossi and Jorge Lorenzo regarding him with the respect as a fellow racer. However, since then and following several changes in teams and bike, he never looked to be competitive amongst the leading riders. But could we now be witnessing him at his full potential, or is this another short phase of good results? If the past three races are anything to go by then the answer is a resounding YES! Of course his first win at the Czech Republic GP was in tricky wet conditions where Cal made the gamble on tyres, and ultimately the correct choice which no other rider made. Those who put this down to simply good fortune were swiftly silenced when he made pole position followed by a second place finish at his subsequent British GP. And judging from his post race comments regarding suffering from a sweaty visor where he could barely see for 20 laps, I think he did pretty well to finish at Misano, let alone secure a eighth place and top satellite rider.

So let’s see how he performs over the remainder of the season because no one can deny he is showing a positive progression so far this year, and now he has the taste for winning back, I’m sure he will be as motivated as ever to remain at the top.

It was a real shame to see Sam Lowes fall during the Moto2 Misano race whilst he was looking really strong and in contention for at least a podium finish. I was completely absorbed during the first half of the race as he initiated his title charge campaign. After an all too common poor start he managed to catch up with the leading pack and started to pick off riders in a confident, seemingly methodical manner. But then he just seemed to push that little too hard following a failed overtake and lose the bike in his familiar hot-headed approach that us fans hoped was a thing of the past. I feel perhaps following the frustrations at his home Silverstone race where he was denied a second place finish by an unfamiliar and particularly aggressive block pass by Zarco causing him to fall, he failed to calm down and reset in time for Misano. Could he have been too eager to rectify his title fight so soon after Silverstone? It’s a real shame as this now leaves a significant gap to Zarco where Lowes is now 57 points adrift with just five more races left. Plus, to add insult to injury, Zarco wasn’t performing to his usual high standard whereby he failed to achieve a podium finish crossing the line in just fourth.

Jumping across to his twin brother Alex – who is currently gifted a wildcard ride aboard the Tech 3 Yamaha – he has been raising a few eyebrows. This follows an unfortunate knee ligament injury sustained by fellow Brit Bradley Smith, forcing Smith to the sidelines for a few races and thus providing Alex this great opportunity. At Silverstone current World Superbike rider Alex performed exceptionally well considering it’s his first time aboard a MotoGP machine and in front of his home crowd. He finished 13th, scoring points amongst arguably the most competitive grid in MotoGP’s history. Unfortunately Alex suffered a crash at Misano and failed to finish the race, but was advised he has another opportunity to compete at the next race in Aragon. However, this didn’t dampen the spirits of his temporary Tech 3 boss Herve Poncharal, who had this to say following the race: “I was very pleased with Alex in every practice session including qualifying, he has been doing a great job and I was very sorry to see him crash.”

Could we see another set of brothers compete in the top class in a few years time alongside the Espargaros? Perhaps even Alex Marquez will come up from Moto2 to join his superstar brother Marc. It would certainly back up the age old theory that ‘racing is in the blood’, so let’s hope we find out if that’s true!

Why is Rossi not leading the championship? 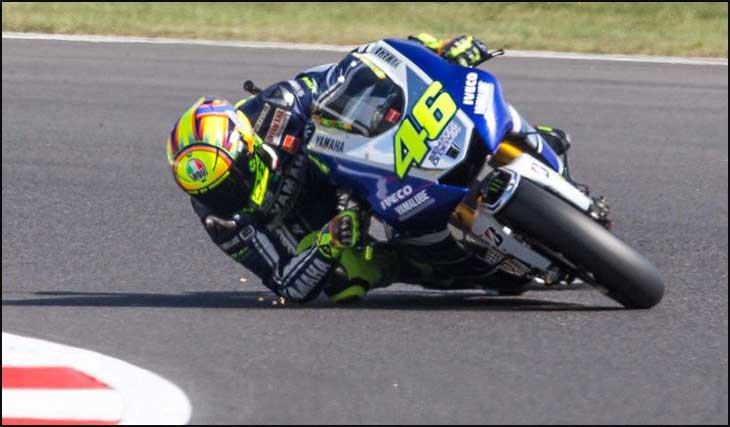 With Rossi’s clear improvement this year in qualifying – his weakest area – and his still consistently high quality race performances, it’s hard to see how he can be trailing championship leader Marc Marquez by 43 points. His three DNFs this year have really hindered his efforts to contend, but he’s still not done. The level of professionalism, coupled with his still raw enthusiasm to succeed, is truly inspiring at the ripe old age of 37, which is granddad territory in MotoGP! The level of support Rossi seems to attract is unmatched across any sport and appears to follow him all around the globe, but it’s always great to see how intense it gets at his home race in Misano. With a race day attendance of more than 100,000 fans (primarily for Rossi), and at one of the smallest tracks, it’s an incredible sight. With such a great a number of people eager to be in the presence of the GOAT (Greatest Of All Time), I love the fact that they allow (I assume) a track invasion following the race, whereby seemingly every fan wants to get near to Rossi on the rostrum.

A mature and level headed Marquez will take some beating 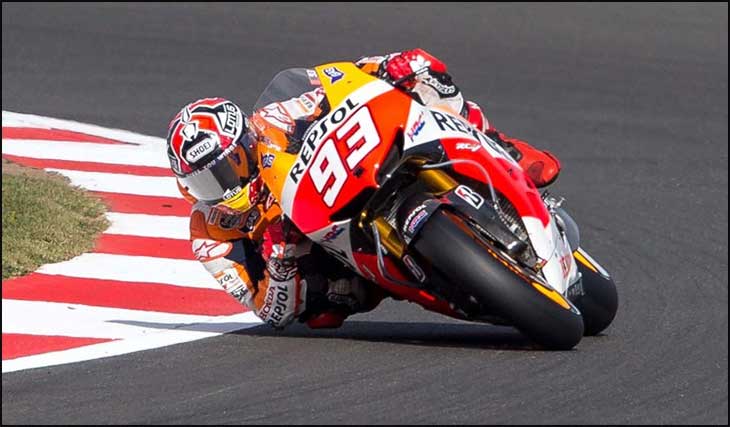 Although Silverstone’s race showed an early and more ‘reckless’ Marquez risking the win without any consideration of the championship, the 23 year old resumed his ‘wiser than his years’ approach at Misano. Following the start of the race, where he showed his usual aggressive nature, he seemed to quickly acknowledge he was far from the quickest rider and allowed Rossi and team mate Pedrosa through without any real fight. He’s known to be a very analytical rider and clearly reviewed his last race, gave himself a telling off, and realigned himself with his real goal of winning a third MotoGP championship. He obviously understands that a two-race lead is not enough to become complacent, with such strong competition coming from the likes of seven-time championship winner Rossi and three-time winner Lorenzo. As we’ve seen with Smith, a single accident can put you out for several rounds. Not to mention, with such an unpredictable group of riders performing well across the grid with varying manufacturers, an ‘entanglement’ is all too easy to find. As a result a clear championship victory for Marquez is far from conclusive. Needless to say there’s never been a better time to follow MotoGP – can’t wait for Aragon! Anyone care to predict a winner this time? 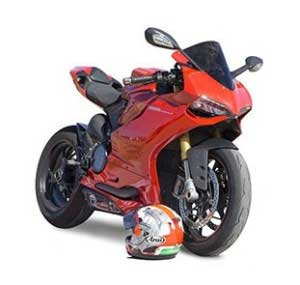 The weather is still great for bikes, whether you’re looking for a daily commute or weekend blast with your mates. I personally prefer this time of year anyway, as it still rains in the summer and it’s often too hot to wear proper protective gear without feeling like you’re in a mobile sauna! It’s also the best time of year to purchase a motorbike with riders looking to free up some cash for the winter or to pay back for their summer holidays. So why not see what’s around or get Creditplus to do it for you? Don’t forget we don’t just provide the finance for your bike; we can find you the bike that matches your spec and deliver it straight to your door. For more info go to our  Find, Fund & Deliver page.

Remember, applying for car finance with Creditplus does not affect your credit file. So what are you waiting for? Apply online using our quick 2-minute application form and we will help you find the finance you need, and the bike of your dreams!