Playing Away – The distances football fans go to see a game.

Playing Away – The distances football fans go to see a game.

Football fan loyalties know no bounds and when it comes to driving, supporters are prepared to clock up thousands of miles each season to see their team, writes Andy Greeves.

Nearly 40 million fans attended matches in the Barclays Premier League and Football Leagues during the 2012-13 season and each weekend over 650,000 supporters travelled to top flight matches.

A cross section (1,000 people) of fans were surveyed about their travelling habits for matches by the Campaign for Better Transport. The results, which were released last month, revealed that 43% of fans drive to home matches and 44% driving to away games.

We Prefer To Drive

Compared to both the coach and train, car travel is the cheapest method with fans able share driving and petrol money. The cost of an average matchday, based on the cost of a match ticket and travel, for a fan getting to the game in a car is £50 while train traveling supporters spend an average of £74. Each mode of transport on matchdays has its own issues, with those driving to and from stadiums often encountering traffic jams and struggling to find decent, managed parking.
The greater provision of Park and Ride schemes, as employed by clubs such as Brighton & Hove Albion and Swansea City, were amongst those initiatives championed by the Campaign for Better Transport and the Football Supporters’ Federation on the publication of this survey. 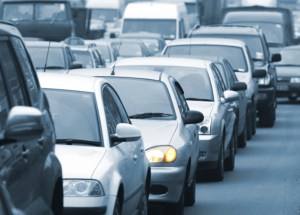 Football fans love to drive but the traffic isn’t much fun!

“Fans go to enormous lengths to see their teams play but clubs sometimes forget that matchday doesn’t start when they go through the turnstile,” commented Malcolm Clarke, Chair of the Football Supporters’ Federation. “The survey results and ideas for improvements shown in this report come largely from the fans themselves, and show that there is a large appetite for having more options for how to get to games, home and away.”

It remains to be seen what provisions clubs will put in place for supporters traveling to their grounds by car next season on the basis of reading the Campaign for Better Transport’s survey results. One thing is for sure though, millions of fans will be driving the length and breadth of the country to see their team play.

Another recent study, this time by AA Route Planner, explored the miles that Barclays Premier League fans clocked up following their club throughout the 2012-13 season. Spare a thought for Newcastle United fans, who if they drove to each one of the other 19 grounds in the division would have traveled an incredible 4,300 miles during the course of the campaign. North East rivals Sunderland meanwhile would have traveled just eight miles fewer to attend all of their league away games.

Fans in the Midlands were most ideally placed for getting to away games with supporters of Aston Villa traveling nearly half the distance covered by those of Newcastle getting to away games last campaign. They had to travel just 2,209 miles to make all their away games, while nearby West Bromwich Albion traveled 2,263 miles. Stoke City had the third least distance to travel throughout the season, while supporters of clubs in London traveled between 2,449 and 2,630 miles during the course of 2012-13.

Swansea City fans had the third longest distance to travel throughout the season, with Swans fans clocking up 4,014 miles. With South Wales rivals Cardiff City getting promoted this year, they can at least look forward to one short journey next season, with the Liberty Stadium in Swansea and Cardiff City Stadium separated by just 41.8 miles.

Fellow Barclays Premier League new boys Hull City will be adding to journey times and distances for many club’s fans in 2013-14, with the KC Stadium in Kingston upon Hull 213.2 miles from Central London and 136.3 miles to Birmingham.

Those football fans who like a driving challenge meanwhile might want to see if they can top the efforts of teacher Paul Cox and friend Luis Felipe, Back in 2010 they created a new record by driving to all 20 Premier League clubs in just over 14 hours. They completed the 572-mile trip in 14hrs 3mins 18secs, knocking 46mins off Paul’s previous unofficial record!

They started out at 9.35pm at White Hart Lane, home of Tottenham Hotspur in London and finished at Newcastle United’s St James’ Park at 11.38am next morning.