Report: What Lies Ahead For Car Finance?

Report: What Lies Ahead For Car Finance?

Finally the doom and gloom of 2012 is behind us. But what lies ahead, and what does it mean for vehicle financing? You’d be forgiven for feeling relieved that 2012 is finally over and for assuming that 2013 simply could not be any worse.
Well, you’re right – it can’t be any worse…but unfortunately it doesn’t look like being much better either. But will the economic outlook have a negative effect on vehicle financing?

The doom and gloom of 2012, with banks refusing to lend, looks very much set to continue. Some economists have predicted a ‘groundhog’ year, with continued uncertainty leading to a repeat of last year’s drop in GDP of 0.1%.
Official Government statistics, from the Office for Budget Responsibility, are predicting growth of 1.2% in 2013, which while not a huge leap is at least a move in the right direction.

Some economists have rubbished these predictions, though, and instead expecting an unprecedented triple-dip recession, with the country’s AAA credit rating potentially at risk.
These very negative predictions would line up with the expectations of the depressingly-nicknamed ‘Dr Doom’, a professor at New York University who, back in July, said a number of unpleasant factors would completely derail the global economy in 2013.

It is, as you may have noticed, all so negative…
But it may not be, for it seems that even the economists can’t agree. Indeed, data from the Organisation for Economic Co-operation and Development released in early December, suggested that UK growth would be ‘firmer’ in 2013. By firmer, they mean that while growth won’t be rapid, it will be less likely to reverse so easily. Hope on the horizon, at least, and it would seem there are some positives with regards the automobile industry. 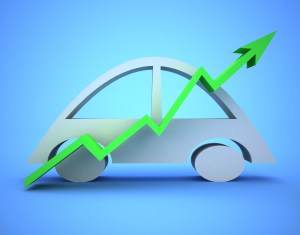 With all the negative news that it seems impossible to escape, it would be easy to panic and assume that vehicle finance has been hit in the same way that mortgages have, but no – recently released data from the Finance and Leasing Association showed that 70% of new cars bought from dealers in October were bought on finance. What’s more, 1 million new cars are set to be bought in 2013, and it’s unlikely too much will have changed between October and now.
So despite the same gloomy outlook that Brits have by now become accustomed to in their daily lives, it shouldn’t affect vehicle financing – depending on the individual circumstances of the buyer of course.

The internet is a great resource, not just for choosing a vehicle but also for understanding and assessing the different finance options available. So make sure you always do your research – but be sure not to damage your credit score – if getting a quote (which you’re unlikely to accept) involves a full credit application, don’t go ahead – even getting a quote can have a negative effect on your credit score.

Do your research, understand the options available and, most importantly, don’t panic – lenders are still lending, and it doesn’t look like that will change this year.