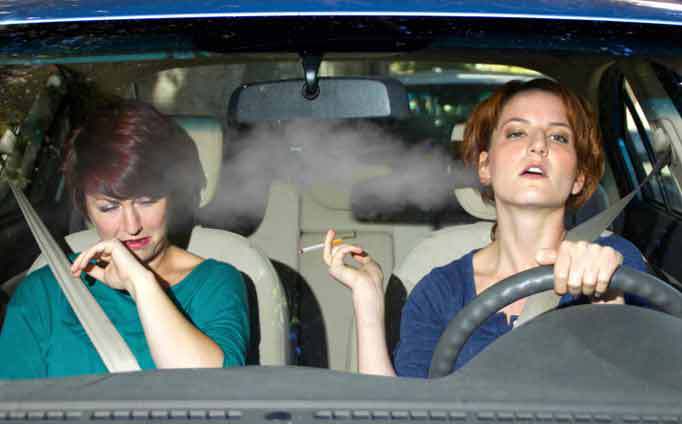 Smoking ban in cars with children to be considered.

Smoking ban in cars with children to be considered.

David Cameron’s spokesperson has said that he will consider banning smoking in cars with children.

The policy was put forward by the Labour party, and debated in the House of Commons today. Under Ed Miliband’s proposal, smoking in cars with children would become a criminal offence, carrying a £60 fine.

With similar smoking bans in place in Australia and Canada, as well as some states in the USA and some countries in Europe, shadow health secretary Andy Burnham is keen that Britain should be the next to implement this ban.

With some reports claiming that tobacco smoke in a car is 23 times more toxic than in a house, due to the smaller, enclosed area, the resulting effect on children passive smoking is in turn greater. Opening windows and doors will not tackle the problem – according to the NHS, “residual particle matter, (including these toxins) builds up wherever smoking takes place – on surfaces, skin, clothing and furnishings.” An estimated 500,000 children are exposed to tobacco smoke inside a car every week, according to figures from a Labour party report.

Whilst the proposal is generally welcomed, there are those who believe it is an unnecessary approach. The Department of Health commented that it believes education about the effects of second-hand smoke is a better way to discourage people from smoking around children, whilst some pro-smoking groups are confident that most smokers would not light up whilst a child was in the car anyway.

In particular, pro-smoking groups are concerned about the wider restrictions on a smoker’s personal right to light up. Predictably, the groups are arguing that it will be very difficult to enforce, and as a result will progress onto a wider reaching ban on smoking in cars altogether. Luciana Berger, the shadow public health minister rebuked these claims, saying, “We are talking about the very specific issue of children in a car that don’t have a choice which vehicle they are in that are subjected to levels of toxic smoke which are 23 times more toxic than in the home.”

Whilst this is not the first time that this issue has been raised, it is the first time it has been debated in the House of Commons. In the meantime, car manufacturers have generally already stopped providing cigarette lighters or ashtrays in new cars, due to the declining popularity of smoking – a sign that even if the government are taking their time to enforce this kind of smoking ban as law, the general public at least are making a noted change in both their smoking and driving habits.