There have been a host of film and TV series where the vehicles used have stolen the show as much as the actors performances. Andy Greeves profiles some of the most famous four (and three) wheeled stars of the silverscreen. 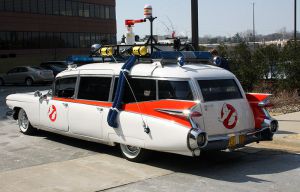 The recent £70,000, two and a half year restoration of the original ‘Ecto 1’ car from Ghostbusters has fuelled rumours that a third edition of the film series is soon to be produced.

Ecto 1, a 1959 Cadillac Miller-Meteor Ambulance Limo, was one of the stars of the original Ghostbusters films with its wailing sirens and deep-pitched exhaust. The car was the creation of Steven Dane, credited at the end of the first film as ‘Hardware Consultant’, and featured a special pull-out rack in the rear of the vehicle for containing the Ghostbusters’ proton packs.

In the first film, the vehicle is purchased by Ray Stantz (played by Dan Aykroyd) for $4800 dollars. It is in a poor condition needing “suspension work and shocks, brakes, brake pads, lining, steering box, transmission, rear end… new rings, mufflers, a little wiring….”
In real life, Ecto 1 found itself in a similar state of disrepair until Hollywood-based garage Cinema Vehicle Services restored the car to its former glory to celebrate the film series’ 25th anniversary in 2009.

Currently the car is available for hire in the UK – Check it out here!

Drivability – With excellent rear space, this vehicle could suit the needs of tradespersons of the ghostbusting variety or otherwise. Ecto 1 demonstrated its difficulties in cornering effectively in the Ghostbusters films, so take corners at low speed. 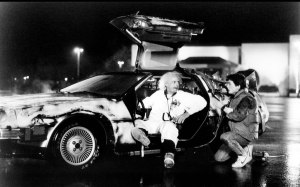 Central to the story lines of the Back To The Future film trilogy, released between 1985 and 1990, was a modified 1981 DeLorean DMC 12. Powered by plutonium, supplying “1.12 gigawatts of power” from the “flux capacitor”, the car travels both forward and backward in time in these cult film classics.

Made of stainless steel to enhance the car’s time-travelling abilities, the world famous automobile was sold at auction for $541,200 back in December 2011. But for its fame, a comparable motor would likely have only fetched around $30,000. Part of the proceeds from the sale of this DeLorean DMC 12 was donated to the Michael J.Fox Foundation for Parkinson’s Research.

Drivability – This car would be ideal for avoiding rush hour traffic. When it achieves a speed of 88 miles per hour, it can be transported to any point in time. Be careful to keep your plutonium levels topped up though or risk being trapped in 1955. 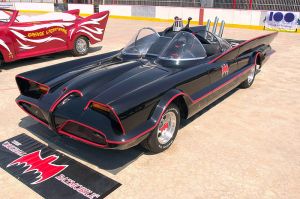 Another famous film car that recently went under the hammer was the original Lincoln Futura used in the Batman film and TV series from 1966.

Hollywood car designer George Barris bought this car for a nominal $1 back in 1965 and spent $15,000 transforming it into the Batmobile. 87-year-old Barris has made a hefty profit on the iconic black vehicle that sold for $4.6m at auction in January 2013. Its sale fee equals that of the Aston Martin DB5 driven by Sean Connery in Goldfinger, making the two cars the most expensive film vehicles ever sold.

Drivability – While the old Lincoln Futura maintains its classic looks provided by George Barris, its age of 47 years and value would make it a nightmare to insure. 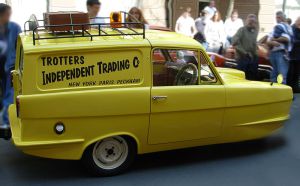 Contrary to the commonly misheld belief, Del Boy’s yellow trading van is in fact a Reliant Regal NOT a Reliant Robin. The lovely jubbly three-wheel, yellow vehicle bares the legendary logo ‘Trotters Independent Trading Co. New York, Paris, Peckham’ and featured in some of the most well-known scenes of the TV series including the episode where Del and Rodney dress up as Batman and Robin.

Three identical 600cc vehicles were used throughout the duration of filming of Only Fools and Horses and in 2007, the second of those was sold for at auction for £44.227, complete with furry dice, blow-up dolls and a pair of leopard skin knickers.

Such is the Reliant Regal’s popularity that a funeral director in Lancashire has even created a hearse using the iconic yellow vehicle as inspiration.

Drivability – Hazardous to drive in heavy winds, this three-wheeler proved unreliable in Only Fools and Horses with a number of infamous breakdowns.