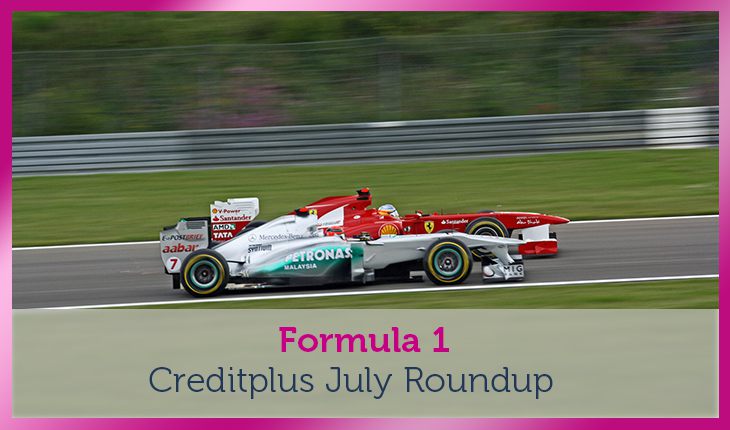 Welcome to our roundup of all the action, drama and intrigue from the world of Formula One. July was one of the most dramatic months of the season, as the battle at the top of the F1 standings didn’t just heat up, it turned white hot! We’ll look back at the Austrian Grand Prix, collisions throughout the years, Hamilton’s history making race at Silverstone, Vettel’s resurgence in Hungary, and the future of the British Grand Prix.

This year’s Formula One championship has finally given what the fans crave – a bit of competition between the teams. After Mercedes’ dominance over the past few seasons, the resurgence of Ferrari as a genuine title contender has grabbed everyone’s attention. With Vettel and Hamilton competing at the top, there was little doubt that two of the most competitive drivers in F1 history would soon be pushing each other to their limit.

Things boiled over in Baku, with the Azerbaijan Grand Prix dominated by the incident between Vettel and Hamilton. All eyes were on Austria to see how the two drivers would react where it matters – on the track. Unfortunately for Hamilton, Austria would prove to be a disappointing race.

Before the race had even started, Hamilton was in trouble. His unauthorised gearbox change meant a five-place grid penalty, leaving Hamilton in eighth place. The only positive was his teammate Bottas taking pole position, meaning Vettel had to settle for second.

He takes his second race win - chased to the flag by Vettel just like his debut win in Sochi! #C4F1 pic.twitter.com/agYp3iKHkN

Hamilton would soon demonstrate his skill, able to battle his way to fourth place. Any other driver would be pleased with such a recovery. But Hamilton is not just any other driver. He told the BBC: "Twenty points behind is 20 points behind. It's not great but it could be 30-something today. Of course, there is a hit when you get a penalty and start eighth rather than third. It makes a difference but it is not the end of the world. I got the best points I could."

Can Valtteri Bottas challenge for the #F1 title?

Bottas was the real winner of the weekend. His victory meant that he shouldn’t yet be discounted as a potential champion. If Vettel and Hamilton keep the pressure on each other, he could slip through under the radar.

A history of violence

Vettel’s collision with Hamilton was rightly seen as a reckless and unnecessary act. But it also harkened back to the glory days of Formula One where the sheer will to win of the drivers often led to collisions on the track. Even Hamilton might have managed a wry smile as he thought of his racing icon Ayrton Senna.

Senna was involved in two of the most famous collisions in F1 history. Battling his arch-nemesis Alain Prost for the title in 1989, the two cars came together in the penultimate race at Suzuka. Whether it was deliberate or not remains open to debate, but the crash and Senna’s ultimate disqualification meant that he finished runner up behind Prost.

Revenge would come one year later, once again taking place at the Japanese Grand Prix. This time Senna was leading the championship with Prost in second. Having qualified in pole position, Senna was unhappy with which side of the grid first position would start from. Going into the first corner, Prost had taken the lead. Instead of braking before the turn, Senna put his foot down. He crashed into the side of Prost, taking both cars out of the race and giving Senna the title.

Vettel may have found inspiration in his racing idol. Schumacher was known for his desperate desire to win – just ask Damon Hill and Jacques Villeneuve. In 1994, Schumacher was leading Hill by just one point going into the final race of the season. On lap 35 and leading the race, Schumacher lost control of his car and went off track. He was able to get back on, but his car was damaged and Hill was closing in. As they both came into the next corner, Schumacher turned sharply and collided with Hill, eliminating both cars of the race. The stewards deemed the collision a racing incident and no further action was taken despite Hill’s furious protests.

Fool me once, shame on you. Fool me twice…

Three years later and another Williams driver was battling Schumacher for the championship. Villeneuve was trailing by one point as they went into the final race of the season – the European Grand Prix. A competitive race came to a climax when Schumacher collided with Villeneuve on lap 48 – intentionally trying to take out the Canadian driver. His ploy failed and his car was eliminated, with Villeneuve managing to limp on to finish third place, winning the title.

If losing wasn’t bad enough, two weeks later the decision was made to disqualify Schumacher from the entire 1998 season. To his credit, Schumacher accepted the ban. But then again, when you’ve run seven titles, you can afford to sit out a season.

There was only one question on everyone’s lips going into the British Grand Prix – can Hamilton do it? With four wins already under his belt, racing fans were hoping that he could match Jim Clark and Alain Prost’s record of five victories at the British Grand Prix. Any doubts were quickly dispelled by one of the most dominant displays of the season.

How Lewis Hamilton and Mercedes 'owned' the #BritishGP - and what it means for the rest of #F12017 https://t.co/NaUG2UHgUf #SkyF1 pic.twitter.com/9xSYjGtQLR

It all started with a stunning lap in the third stage of qualifying to secure pole position. That speed would continue into Sunday’s race, where Hamilton was already 1.6 seconds ahead of the pack by the end of the first lap. Only the safety car could slow him down. In the end, Hamilton led from start to finish to add another record to his long list of achievements. Who would bet against him going one better in 2018 with a record-breaking sixth victory?

Those looking for drama were better placed to look further down the race order. It was a difficult weekend for Ferrari with both drivers having tyre problems. Vettel’s would prove especially costly, as a front-left tyre failure with two laps to go meant he went from third to seventh. His lead at the top of the driver’s championship would be cut to just one point.

Away from the two championship leaders, Bottas once again showed his skill and determination, finishing second. Starting ninth on the grid, Bottas combined a smart race strategy with a performance that made the most of his tyres.

Special mention must also go to Ricciardo, who battled back from nineteenth position to finish in fifth place.

The end of the British Grand Prix?

The future of the British Grand Prix has often been clouded in uncertainty. Despite regularly selling out its ticket allocation (one of the few circuits to do so), financial troubles mean its place on the calendar is uncertain. With the Silverstone owners looking at their options, and with other tracks seemingly unwilling to put themselves forward, the British Grand Prix could soon be missing from the race calendar.

The decision of the Silverstone owners to activate their break clause from the contract means that the British Grand Prix is only guaranteed until 2019. What happens then?  With no other circuits holding the necessary qualification to be an F1 circuit (and little sign other circuits want to take Silverstone’s place), the future remains cloudy.

So what’s going wrong? Record crowds haven’t stopped the track from showing losses over the last two years. The current deal signed in 2010 had a clause that meant the hosting fee charged by the F1 management was scheduled to increase year on year, up until the end of the contract in 2026. There were doubts that they could afford the fees at the start, so this turn of events should be no surprise. Whether Silverstone are hoping the appeal and history of the British Grand Prix will mean a new contract with better terms can be agreed, that remains to be seen.

Losing the British Grand Prix from the race calendar is almost unthinkable. Along with the Italian Grand Prix, it is the longest continuously staged Formula One race in history. While not as glamorous as Monaco, its old style and design makes it one of the most competitive and thrilling races on the calendar.

“It’s not just about the British Grand Prix,” Damon Hill told the Guardian, “It’s also about the kind of tracks that appeal to drivers and fans. The more we go to anodyne computer-designed circuits or tracks with no challenging corners the more we are devaluing the attraction of the sport.”

Nigel Mansell was more optimistic in his view on the situation. “Hopefully they are taking this decision to announce that they need help and hopefully someone will come forward. F1 has a duty as well to reward the circuits who have been faithful to them over so many years and have made the sport as brilliant as it is.”

The last race before the summer break and the fight at the top of the championship was as close as it has been all season. A good month for Hamilton meant the gap had been reduced to just a single point. Still reeling from his intentional collision with Hamilton in Baku, Vettel was having a month to forget. Would Hungary turn things around?

In a tense, close race, the two teams at the top of the constructor’s championship put on a real show. In the end, it was Vettel who came out on top. With Mercedes closing in, his Ferrari teammate was used to help slow his opponents down, Raikkonen showing his class as a team player while still making it clear that he could have pushed on at Vettel if he wanted to.

Lewis Hamilton doffs his cap to teammate Valtteri Bottas and allows him back through to take the final podium place 👊#HungarianGP pic.twitter.com/M7fMLb4lcF

It was a day for team tactics, as Hamilton and Bottas switched places twice during the race. Determined to close on his championship rival, Hamilton convinced Bottas to step aside, promising that he would let Bottas back in front if he could not overtake a Ferrari. In the end, Hamilton was true to his word and let Bottas back in front, sacrificing valuable points but showing he was a man of his word. Would this have happened if Rosberg was still his teammate? That’s a question Hamilton doesn’t have to answer!

The race started off in dramatic fashion as the two Red Bulls Ricciardo and Verstappen collided going into turn two of the first lap. Ricciardo had overtaken the young driver after Verstappen had been forced off track by Bottas. Despite Ricciardo being clearly ahead, Verstappen broke too late and slid into his team-mate. The Aussie driver was out of the race by turn three, with Verstappen able to recover from the 10-second penalty handed to him for the incident and claim fifth place.

Ricciardo was clearly still fuming after the race. "Look, the way Max handles it, more than the way I handle it, will dictate how it goes in the future,” he told the BBC, “For sure I can go and call him names but if he acts like the age he is, or if he acts like a man and admits the mistake.”

In the end, it was a great day for the red of Ferrari, with Vettel now holding a commanding 15 point lead over the summer break until racing resumes at Spa in four weeks time.