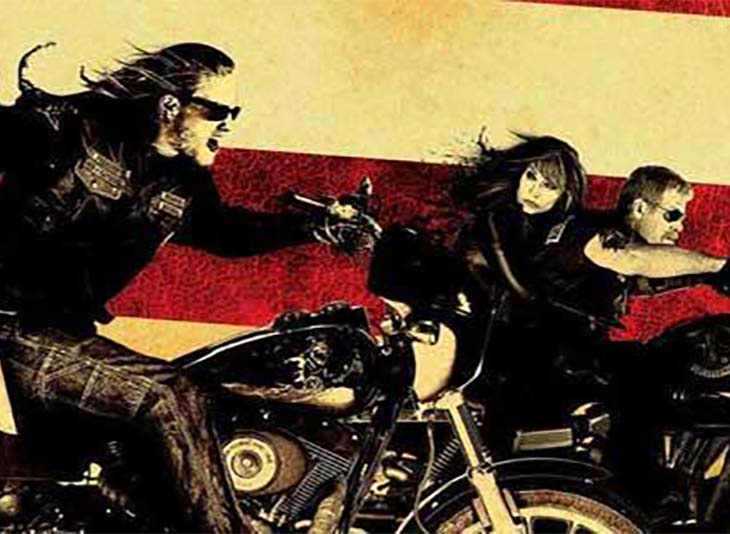 The inspiration behind Sons of Anarchy

The inspiration behind Sons of Anarchy

Sons of Anarchy – the inspirations behind the hit TV series. Sons of Anarchy returns to television for its seventh and final season this weekend. Fans of the show will be expecting more of the gritty, gripping crime stories that have made the show so successful.

To celebrate the beginning of the end, we take a look at the inspiration behind the show – outlaw motorcycle gangs.

Formed from the ashes of war 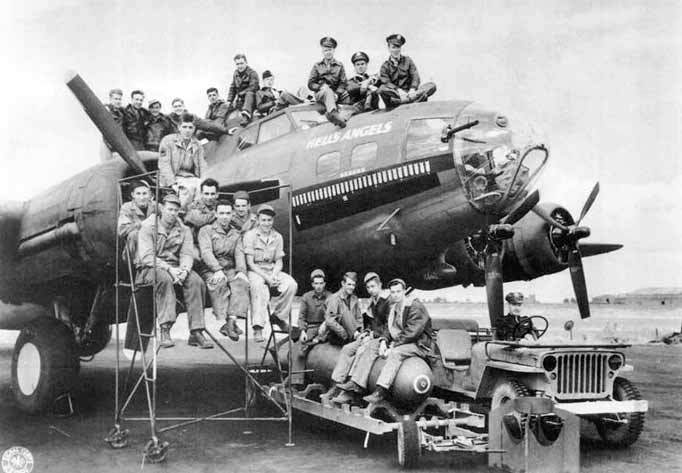 One of the many Hells Angels bomber squadrons

Outlaw motorcycle gangs were formed from the many motorcycle clubs that started appearing shortly after World War Two in America. Returning from the war disaffected and shaken by what they had seen, groups of bikers began forming clubs to unify their disdain of the establishment.

They wanted to celebrate ideals of freedom and brotherhood, something they had lost since leaving the close knit squadrons in the military. These clubs incorporated some characteristics of their military life, organising themselves within a strict hierarchy in a similar style to military ranks.

All clubs have a president, with vice president below him, and then various sub-roles such as treasurer, secretary and sergeant-at-arms. The idea of brotherhood and fraternity is put above everything else, with these close-knit groups extremely hard for outsiders to join without passing difficult and rigorous selection processes.

In most cases, a vote by the current members must be passed before someone is accepted. The new recruit must then swear a pledge of allegiance to the club.

Each club has their own colours, a patch or badge that every member must wear on their rider’s vest. Another throwback to the military origins of these motorcycle gangs. 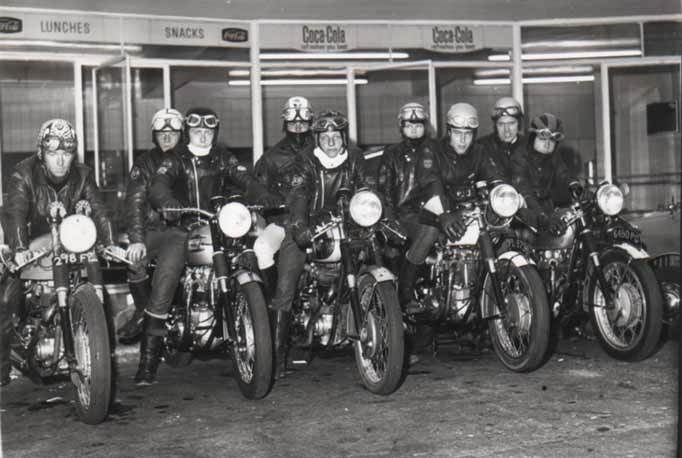 “99% of bikers are law abiding citizens.”

As these motorcycle clubs grew in popularity, some turned towards crime as a way of making money and further strengthening the bonds between the members.

Unlike most criminal organisations, outlaw motorcycle gangs openly display their allegiance. Club colours and tattoos are prominently displayed, with some gangs even going so far as to register trademarks of their name and symbol.

Bikers who engage in criminal activity often wear a “1%” patch, referring to themselves as one percenters. This goes back to a statement released by the American Motorcycle Association that said ninety nine per cent of bikers are law abiding citizens, meaning the other one per cent are criminals.

The most common criminal activity associated with outlaw motorcycle clubs is drug dealing. An FBI report put the income brought in by outlaw gangs in the US as being up to $1 billion per year.

The mobility of the bikers means they can easily transport drugs across borders, with the fearsome reputation and often large numbers becoming a deterrent to any law enforcement officer looking to engage. 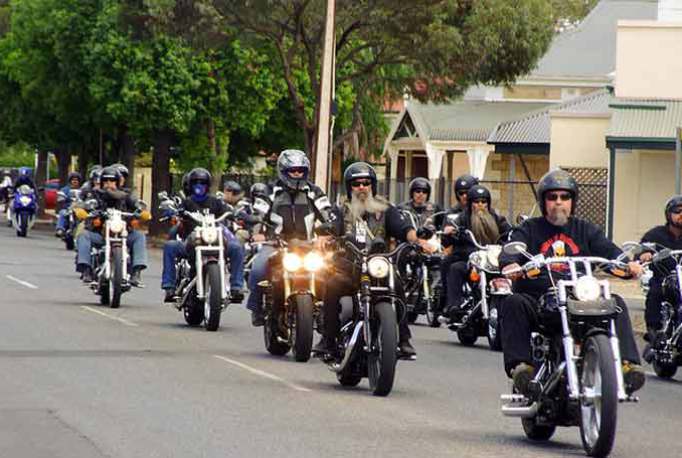 Other criminal activities include trafficking stolen goods, extortion and gun running (the crime of choice for the Sons of Anarchy). During the 1980s, the FBI ran an operation targeted at Outlaw motorcycle gangs.

Titled “Operation Roughrider”, the investigation involved forces from eleven states coming together to tackle the criminal activities being carried out by Hells Angels and the Outlaws gang members.

In many cases, the outlaw gangs turn to violence to protect their interests, engaging in bloody turf wars to control territory. Wars between gangs are not uncommon, with assaults and murders taking place regularly.

The Quebec Biker War in Canada resulted in an incredible number of deaths – 150 murders including an innocent bystander killed by a car bomb. The war also involved 84 bombings and 130 incidences of arson.

It is believed the war was instigated by the most notorious biker gang in the world – the Hells Angels.

”When we do right, nobody remembers. When we do wrong, nobody forgets.” 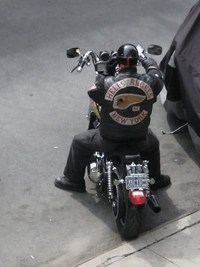 The exact origins of the Hells Angels Motorcycle Club is a closely guarded secret, although it is believed that it spawned from the same post war roots as most biker gangs.

The name “Hells Angels” is most likely to have come from the popular nickname given to bomber squadrons during World War Two, such as the Flying Tigers bomber squadron that were based in China.

Although the official website denies that the founder members were military, they do acknowledge the influence of one man in receiving their iconic name – Arvid Olsen, a serving member of the Flying Tigers.

Deemed to be an organized crime syndicate by the US Department of Justice, Hells Angels bikers deny that they are involved in any criminal activity. On the Hells Angel website, a list of currently incarcerated members is posted, alongside a list of all the past members who have died.

The most notorious incident in the Hells Angels long and chequered history was the Altamont Free Concert in 1969. Headlined by the Rolling Stones, the Hells Angels were hired by the band to provide security for the event.

The crowd that day was rowdy, with later reports stating that the Hells Angels were unprepared for just how chaotic it could become. During the headline set, a man named Meredith Hunter was stabbed to death by one of the bikers, Alan Passaro.

During the murder trial, it was revealed that Hunter had become agitated by the gangs rough approach to security, and had approached the members with a handgun. Passaro was acquitted of murder on the grounds of self-defence.

Despite the acquittal, the legend of the Hells Angels grew more notorious. The Hells Angels have grown into a worldwide organisation, with chapters in many countries across the planet. The United Kingdom has played host to some notorious incidents involving the gang.

And in January 2008, 30 members of the Hells Angels and Outlaws had a massive brawl at the Birmingham International airport. 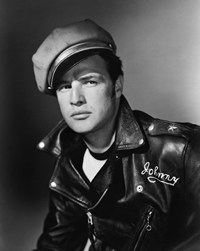 The notoriety of outlaw motorcycle gangs grew as reports of their lifestyle and criminal activity became more widespread. The gangs were further mythologised by the media.

One of the most famous films that really launched outlaw gangs into popular culture, was “The Wild One” starring Marlon Brando. Extremely controversial at the time for its portrayal of violence, the style and appearance of the outlaw gang, in particular Brando, really pushed outlaw motorcycle gangs into the public consciousness.

Rightly or wrongly, the idea of biker gangs as notorious criminals grew and grew. Films continued to portray outlaws as marauding gangs of violent thugs, travelling from town to town looking for trouble.

In some instances, it is thought that the police and local governments encouraged these negative portrayals, in a bid to make outlaw motorcycle gangs scapegoats.

In a bid to clean up their image, outlaw motorcycle gangs often take place in philanthropy, raising money for charity through events and rallies.

Whether this is a genuine attempt to benefit good causes or just a way to cover up their criminal activities is disputed, particularly by the police. In reality, the answer is likely to be a bit of both.

Most outlaw motorcycle clubs have a certain brand or type of bike to ride. Hells Angels are most associated with Harley Davidson, whereas gangs like the Outlaws require all members to ride American chopper style bikes. 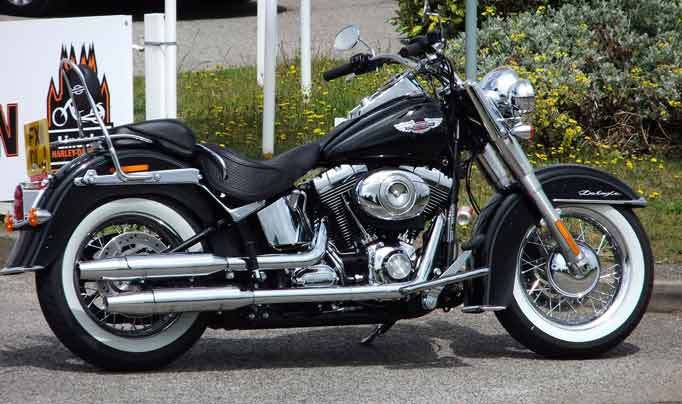 The most famous biker brand – the Harley Davidson has long been associated with the ideals of freedom that outlaw gangs embrace. 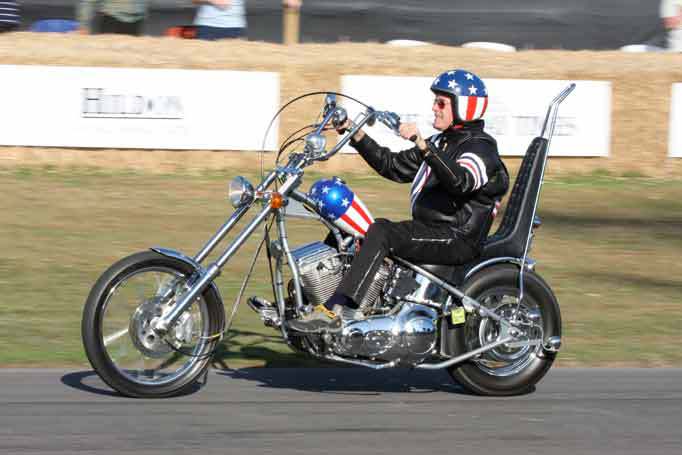 Style wise, one of the more iconic types of bike is the “Chopper”. As seen in Easy Rider, this image shows Peter Fonda on the famous “Captain America” bike. 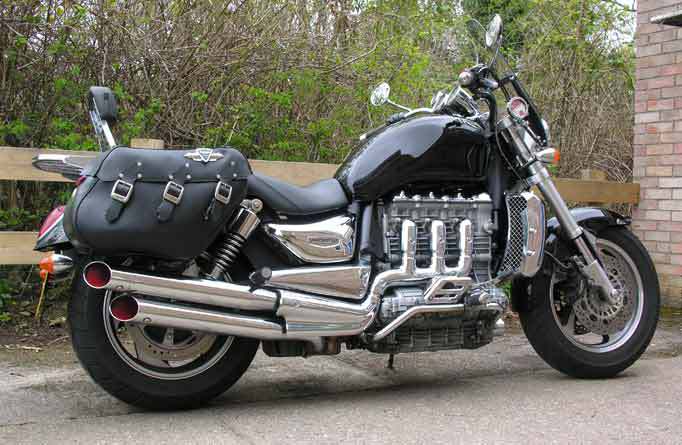 Triumph are another of the famous motorcycle makes that have become popular with biker gangs. 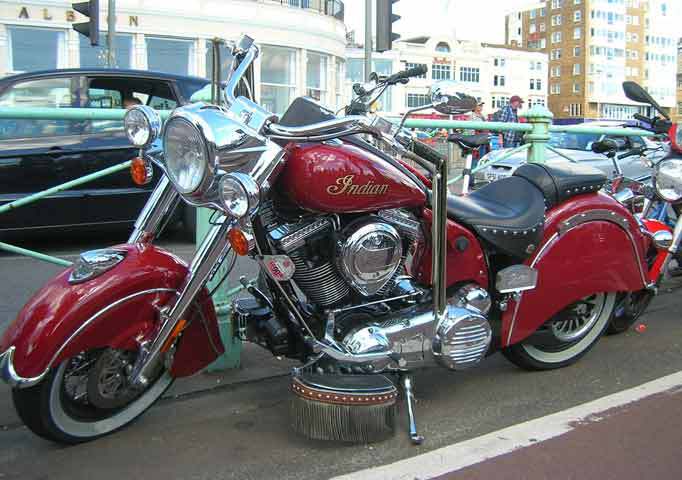 The Indian motorcycle company are an American make. During the 1960s, the Indian was used to set several land speed records. 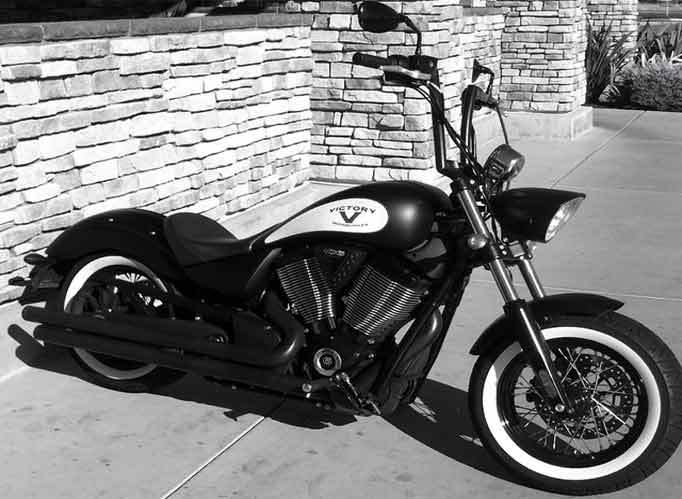 Victory are another American motorcycle brand, started to jump on the success of the Harley Davidson make.

The Hells Angels are the most famous outlaw motorcycle gang. Here are some of the other notorious biker organisations.

The Outlaws: The main rival of the Angels, the American Outlaws Association have a long criminal history. Their former leader Harry Joseph Bowman was on the FBI’s Most Wanted List before being sent to prison for 3 murders.

The Pagans: Engaging in violent battles with the Hells Angels, the Pagans are known for their denim outfits and riding Triumph motorcycles.

The Bandidos: “We are the people our parents warned us about.” The Bandidos have a violent reputation, most famously for the murder of flyweight boxing champion Robert Quiroga.

The Mongols: Formed by Hispanic bikers who were refused entry to the Hells Angels, the Mongols hail from California and were targeted by the FBI in a 6 month undercover sting which resulted in 110 arrest warrants.

The seventh and final season of Sons of Anarchy returns where the fate of Jax will be decided. So far we’ve had 79 episodes of murder, mayhem, Shakespearean tragedy and awesome bikes. There’s no way the series won’t end with a anything less than a loud and violent bang. 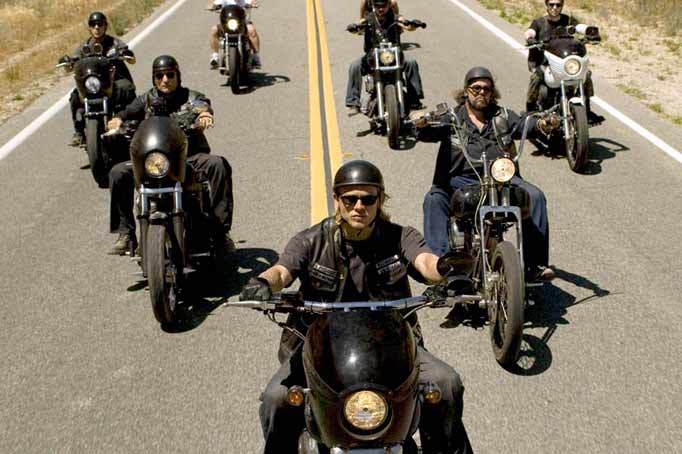 Fancy Riding Your Own Motorbike?

Creditplus not only provide finance for your car - we also provide motorbike finance. Furthermore, we will even source the bike of your choice for you and deliver it to your door, if you require. Alternatively, if you have already found a bike that you want, we can arrange just the money to seal the deal.