To Buy A Car With A Mouse

To Buy A Car With A Mouse

In the future most new car sales could be done via a mouse click rather than a handshake – that’s the prediction of a team of expert global business consultants.

This digital vision of the future is not so far-fetched. Major car companies are already approaching customers through an innovative variety of channels. The traditional showroom still exists but increasingly potential buyers are being contacted through mobile phones, websites and social media. In the future, say the crystal-ball-gazers from Frost & Sullivan, car company sales staff will travel to visit potential buyers to give a digital presentation of their vehicles on a portable screen. 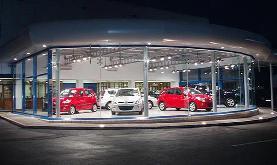 Online car brokers like Creditplus already deal very successfully and efficiently with their customers online. Indeed CreditPlus are able to verify a finance deal with a customer quickly. The car that they have viewed on screen can be sold and delivered to customers before they’ve even seen it. The soaring success of CreditPlus demonstrates that today’s motoring customers are very happy with this quick and convenient method of doing business.

In fact the motor trade is lagging behind the rest of the retail world in this respect. Many fields of business are now conducted mostly online.

In certain industries, like entertainment, leading retailers already collect over 50 per cent of revenues on-line. This change forced the shut down of brick and mortar stores like Borders in the US and bought financial trouble to the UK’s HMV chain. Could this also happen to UK car dealerships in the future?

In Britain all car manufacturers already have websites that were initially just online brochures aiming to drive more visitors into showrooms. These sites are now becoming much more central to their marketing strategy.

For example, Ford UK sells new cars through its website (http://www.fordretailonline.co.uk/) and similarly the budget newcomer Dacia (http://www.dacia.co.uk/) has entered the UK market primarily pushing its online sales channels with dealerships for back up. An upcoming website (http://shopclickdrive.com/) is General Motors’ new initiative to sell cars on-line.

In the US more radical manufacturers like Tesla and Fisker are already providing a complete car-buying process online. Subaru, Fiat, Smart and Volkswagen have conducted selling experiments via independent websites like eBay.

Expect manufacturers to develop new creative ways of digitally enhancing the emotional feel of the vehicle through simulations, augmented reality and showing how the car is built through cameras on the shop floor. For the test drive, premium companies like BMW are creating new solutions like ‘BMW on demand’ where buyers can rent high-end models by the hour at realistic prices. Car companies are also working with car sharing and rental companies to provide test-drive opportunities.

And the future will see car companies opening flagship digital stores in expensive streets in major cities of the world like Audi and its Audi city (http://audi-microsites.com/audi-city/en/). BMW plans to use flagship stores like the one in London’s most expensive street Park Lane, with dedicated staff providing information and marketing… but with not a real car in sight.

What do you think? Would you ever be confident to buy a car online, or do you prefer that face-to-face feeling? Let us know in the comments!