The UK Automotive Industry in the EU – Part One

The UK Automotive Industry in the EU – Part One

The UK’s membership of the EU is a controversial topic, one which divides opinions everywhere. There are a plethora of arguments for and against the membership, social, political and economical, to name a few. Industries will likely be affected across the board, with the automotive industry expecting to experience some significant changes if any of the changes are put into place.

The UK automotive sector plays an important role in the overall economy and industry of the UK, accounting for 3% of GDP and providing employment for over 700,000 people including manufacturing, retail and service sectors. The knock-on effects of a change to the UK’s membership in the EU will be felt throughout the automotive industry, whether positive or negative.

The UK is home to mix of luxury, premium, volume and commercial vehicle manufacturers, as well as eight F1 teams, who are at the forefront of automotive innovation and brilliance. In the last three years the market has seen significant growth, with over £6 billion worth of investment announced over that time period.

The likes of the Sunderland Nissan factory are considered to be some of the best in the world, winning multiple contracts from the manufacturer against rival plants placed throughout Europe and the rest of the world, and are currently producing one of the most successful small electric cars in Europe, the Nissan LEAF. 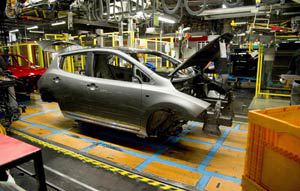 Growth in the UK automotive manufacturing industry is expected to continue into the rest of the decade, coupled with an equivalent upturn in the overall economic situation. Supporting this, a number of continued investments have been promised by automotive manufacturers from across the world to secure the long term production of models in UK factories. New vehicles which have gone into, or are due to go into production in UK factories in the coming years include the following:

Futhermore, investments in automotive research and development (R&D) in the UK have been significant, increasing from 5.3% to 10.1% of total UK R&D spend from 2006 and 2012.

All of these investments will help to increase employment figures in the automotive industry, and stimulate the economy, particularly via export market channels.

The growing strength of the automotive industry is affected by its membership in the EU. The benefits of free trade and free movement of labour (meaning essential skills can be brought into the country) is obvious. However, many industry leaders agree that some of the restrictions put upon the automotive industry by the EU are simply not practical, and can be especially troublesome for smaller companies.

In the coming days we will be discussing the UK’s position within the EU, focusing on the advantages and disadvantages for the UK automotive industry. All statistics have been provided by the SMMT.

Read the next in the series by clicking on the link – Part Two – The EU as an Export Market for the Automotive Industry.