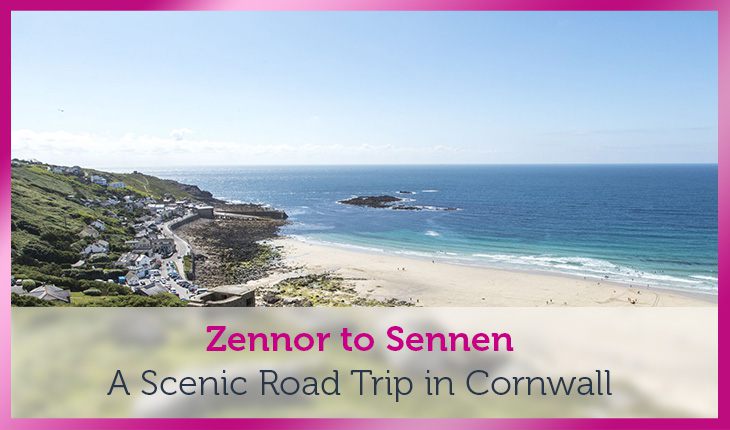 Tucked away in the far west of Cornwall on the wild and rugged Penwith Peninsula is one of the best coastal road trips in the UK – arguably, the world. The B3306 follows the shoreline for 14 miles from the petite and mythical village of Zennor to the golden sweep of Sennen. And the views? Well, let’s just say they’re incredible!

Best savoured with the roof down beneath a clear-blue sky, but equally compelling when a storm is rolling in off the Atlantic, this ultimate road trip combines stunning vistas with twists and turns and secret beaches. But this route goes way beyond beauty and spectacular form. It cuts across the St Just Mining District, an area of the Cornish Mining World Heritage Site, and is dotted with iconic clifftop engine houses that tell the story of Cornwall’s rich heritage. It’s a road journey that gets under the skin of Cornwall and attracts everyone from artists and photographers to scenery hunters and even big name TV and film location managers.

And it’s not just what is going on around the impressive B3306 that draws the eye, the road itself commands attention. Best described as ‘tight, technical and twisty’, it’s a road that quickly becomes unpredictable with an air of anticipation of what lies ahead on each turn. There’s hairpin after S-bend to devour, narrow, one track lanes to navigate and the odd cattle-grid to rumble over – we are in Cornwall’s most far-flung corner after all!

Hold off the accelerator and enjoy the journey, this short but oh-so-sweet heavenly route is best served slow.

The journey in a nutshell. Seat belt on, let’s go… 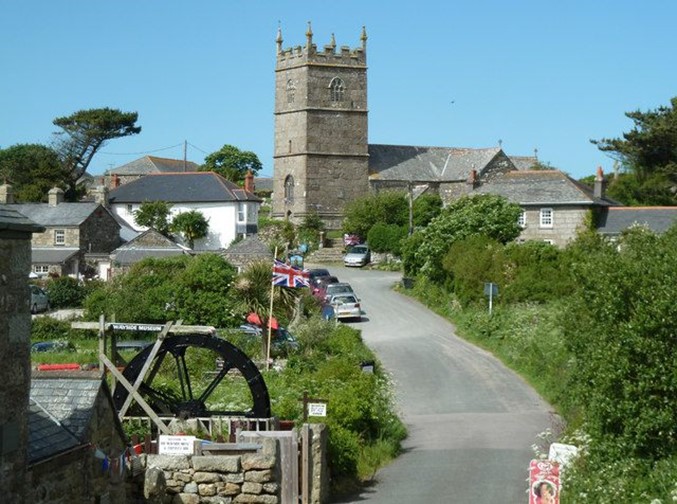 Leaving behind the hustle and bustle of the ridiculously pretty fishing harbour town of St Ives, pick up the B3306 and amble along country roads before arriving in Zennor which marks the official start of the road trip. Described by DH Lawrence as being “the most beautiful place, lovelier even than the Mediterranean”, Zennor is romantically renowned for its legendary mermaid which is said to have captured the heart of a local chorister. Call into St Senara Church to see the wooden Mermaid Chair carved in its honour or strike out onto the South West Coast Path which is at its most challenging but rewarding here. 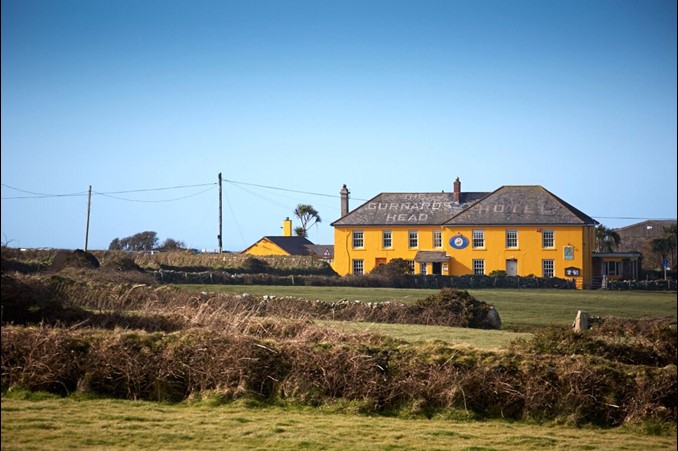 The road then twists and turns through heath covered moorland until it opens out onto the yellow brilliance of the striking Gurnard’s Head, a destination foodie hero which wins hearts and tummies and also offers a great place to stay.

Pendeen and the Tin Coast 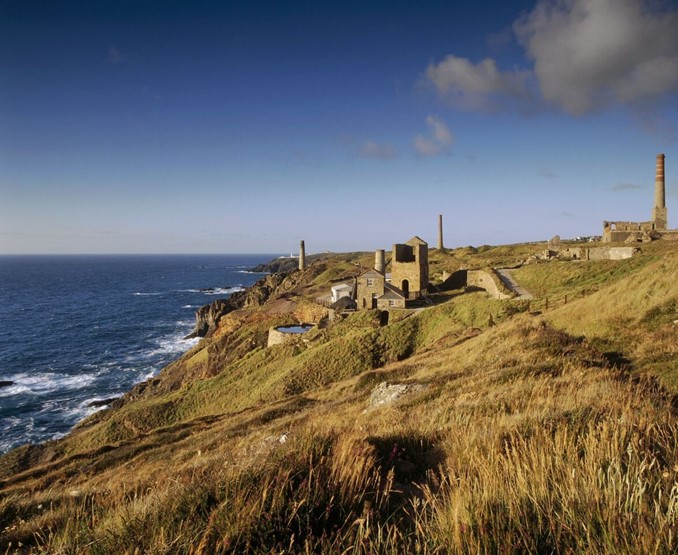 It’s then a sweep past working farms and through tiny hamlets before the road hits the larger town of Pendeen which is lined with traditional granite cottages. Journeying through here and you can almost imagine the men and women who spent their days at the mining coalface, exhausted, filthy and a crucial part of Cornwall’s illustrious heyday. Follow the signs down to Pendeen Lighthouse for views over the rugged coastline.

The road then meets the Tin Coast, a cultural landscape which stretches from Pendeen to St Just and was once home to thousands of mine shafts and hundreds of steaming engine houses. Keep an eye out here for peregrine falcons or you may be lucky and catch a sight of the rare Cornish choughs.

There’s lots to do in this area. Go underground at the 18th century tin mine of Geevor and take in the ambience of the miners dry, which is almost exactly as it was on the day that the last working miner left. There’s also Levant Mine and Engine House, as well as Botallack, which offer a fascinating insight into Cornish mining heritage and for fans of the hit BBC One series of Poldark, a chance to go behind the scenes and discover the locations that play a star role alongside Aiden Turner. 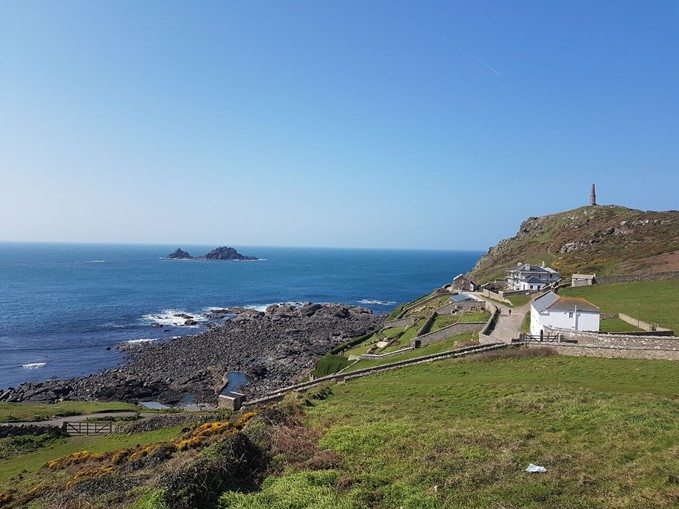 Next stop is Cape Cornwall, one of only two capes in Britain and where the Atlantic current divides. Park up and enjoy a view of the Brisons, the jagged rocks just off the coastline which have been the cause of many shipwrecks and discover the secluded beach of Priest Cove.

A stop off in nearby St Just is also highly recommended. Visit The Jackson Foundation, an impressive gallery space created by Kurt Jackson, a Cornwall-based, internationally renowned artist. 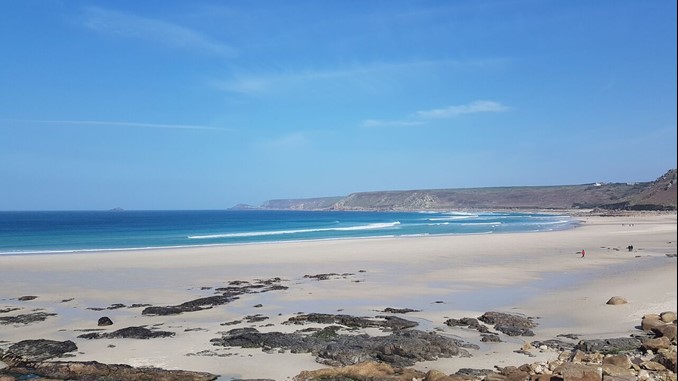 And for the grand finale, the road trip builds to a climax as it dips down into the valley and Sennen beach with its glorious blue sea and white sand comes into view. Breathe in a lungful of salty sea air and say hello to paradise!

Spend some time in Sennen taking in the huge white headed rollers that crash onto the beach from the Atlantic and soaking up the laid-back vibe for which Sennen is loved. There’s a big car park overlooking the beach so it’s obligatory to slip off your shoes and feel the sand between your toes before enjoying a stroll along the harbour front where fishing boats bob in the water to one side and cute teashops serve delicious Cornish Cream Teas to the other.

Call into the RNLI Lifeboat Station to learn about the hard work that goes into looking after people at sea, or step onto the coast path for the three-mile return stretch to Land’s End, the westernmost point of mainland England.

If you’re feeling adventurous pull on a wetsuit and get out amongst the action in the surf. Sennen Surfing Centre is a great place to learn the ropes. The expert instructors know all the tricks when it comes to getting novices riding the waves like a pro so go on, give it a go!

Where to eat and sleep

Being at the end of the earth doesn’t mean that you have to compromise when it comes to finding somewhere to stay or eat. There’s a healthy pick of guest houses, campsites and self-catering hideaways dotted between Zennor and Sennen, as well as award-winning restaurants and homely cafes.

It’s hard to believe that somewhere that gets heaped with such amazing praise and recognition is tucked away in far west Cornwall. To experience the Gurnard’s Head pub with rooms is reason enough to make a beeline for this road trip. It’s simple, it’s hearty and it’s full of character.

Fall asleep to the sound of the sea and wake to beautiful views, Zennor Chapel Guesthouse is a little piece of heaven with a surprisingly reasonable price tag. It’s also home to a great café so you can feast on a home cooked breakfast before hitting the road.

For an authentic camping experience bagsie a pitch at Trevedra Farm in Gwynver, near Sennen beach. It is perched on the clifftops so enjoys stunning sea views and has all the mod con facilities to make sleeping in the great outdoors that little bit more comfortable. 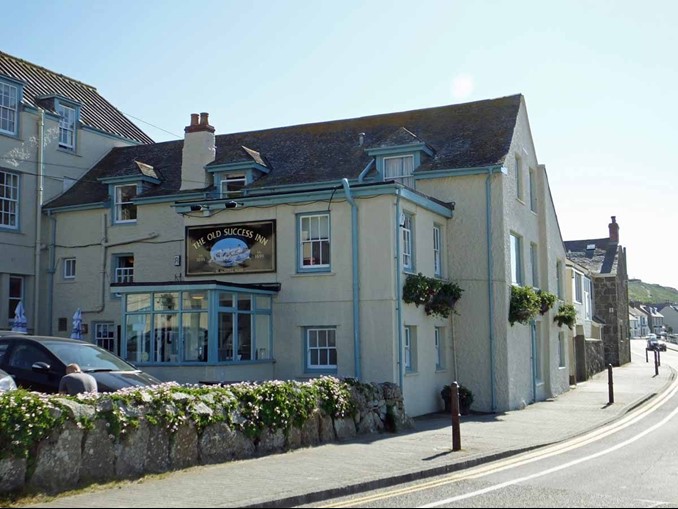 This 17th Century Inn sits right on the harbour front in Sennen Cove and combines the contemporary with the traditional to offer somewhere to eat, drink and stay with magnificent views. There are also a handful of self-catering apartments which make a great option if you are travelling with a car full people.

A tiny but oh so stylish bolthole made for two, Tegan is a first-floor apartment just one mile from Cape Cornwall. Thanks to its elevated position it is super light and airy and is perfectly placed to explore the market town of St Just and beyond. 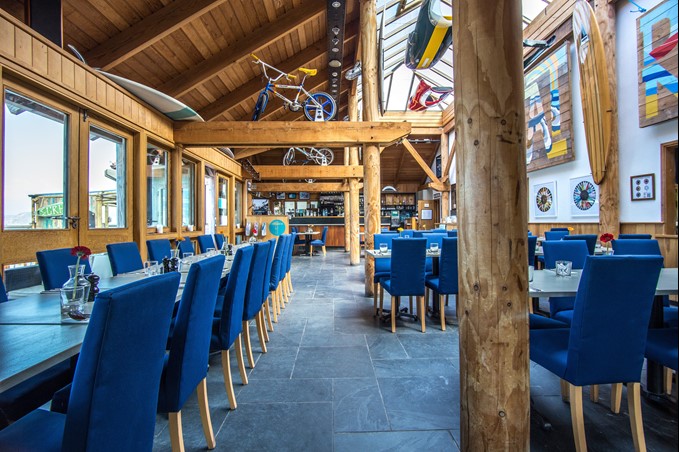 If ever a restaurant could be cool, laid back and delicious, this restaurant is it. Occupying an idyllic spot overlooking Sennen beach and headed up by Ben Tunnicliffe, a local foodie hero, it draws diners from all over Cornwall to feast on freshly-caught fish and seasonal produce.

A tasty pit stop not far from Land’s End and Sennen, the Apple Tree Café serves up the most amazing cakes, light lunches and cooked breakfasts. It rocks a chilled out, earthy vibe and is super welcoming – well worth hunting down!

This quaint farmhouse is quickly earning itself a legendary status for is fresh-from-the-aga cakes and scones. The Cornish Cream Teas served with jam and lashings of clotted cream come highly recommended – enjoy one in the tea garden and drink in the stunning sea views.

Step into The Tinners Arms in Zennor and enjoy a taste of what this corner of Cornwall was like over 700 years ago. It was built in 1271 and little has changed over the years. Pull up a stool in the cosy bar, dine in the light and airy dining room or spill out into the sunny garden with views to the rugged Atlantic coastline. Time your visit right and you could catch the much raved about, Tinners Thursday Folk Night session!

The first time you hit the B3306, experience it in a south-westerly direction, starting in Zennor and heading for Sennen. This way you’ll be driving into the views and, believe us, they get more and more spectacular the further along the road you get. Try to enjoy the drive and its mighty views in one full stretch. You can stop and make detours to the varied points of interest on the return as you retrace the road in the opposite direction towards Zennor and onwards to the honeypot of St Ives.

VisitCornwall.com is the go-to website for everything you need to know about visiting Cornwall. From places to stay and things to do to events and insider info, it’s a must-visit for planning a trip to Cornwall.

Not quite ready to drive off?

If your car isn't up for the challenge of a stunning Cornish road trip, Creditplus can help! Apply today by completing our simple, 2-minute application form or call our Customer Advisors on 0800 1777 290.