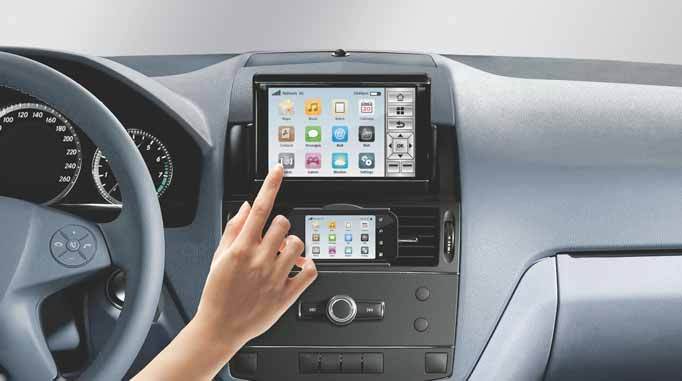 *Image source – http://www.st.com/web/jp/press/jp/t3292With the automotive industry well and truly embracing the software industry, the battle is on to see which operating systems will win over the biggest car manufacturers in the battle for the best infotainment system.

Most modern luxury cars today come with preinstalled computer systems, known in the industry as in-vehicle infotainment or IVI. Demand for the automotive industry to integrate increasingly innovative operating systems for an exceptional user journey is high, and competition to provide these operating systems is fierce.

With key players such as Microsoft, Apple and QNX (to name but a few) going up against open-source software backed by non-profit alliance’s such as GENIVI, the biggest decision for car manufacturers to make surrounds whether to stay safe with a proprietary system or risk open-source software.

Currently, proprietary systems dominate, with QNX and Microsoft occupying the biggest share of the market. Windows Embedded, Microsoft’s initiative, is used in Ford’s sync system, as well as underpinning similar systems by Kia, Fiat and as many as 15 other car manufacturers. QNX on the other hand develops software for the likes of Audi, BMW, Ford, Vauxhall, Honda, Mercedes and Toyota and already features in millions of vehicles.  As they have a more established legacy, it is generally accepted that proprietary systems are more reliable – their expertise means issues are likely to be resolved in a timely manner, and updates should be a much smoother operation compared to the open-source platforms.

Despite the apparent monopolisation of the market by the technology giants, a number of initiatives set up by industry leaders are growing in popularity and success, driving the development of open source platforms. GENIVI, one of the largest of these groups, was founded by BMW Group, Intel and General Motors amongst others, and boasts an impressive list of members. By introducing strict compliance regulations, they hope to counter the potential unreliability that is a risk of using open-source platforms, and go on to reap the benefits, including far greater control over features – a factor which proprietary systems such as Windows Embedded limit considerably.

What can be agreed upon is that the game is most certainly changing. With more new OS releases for cars anticipated such as Samsung’s Tizen OS (operating software designed to fit as many different types of devices as possible) – and increasing interest from the motoring industry – it won’t be long until the high standard we expect of our smartphones and tablets is matched in our cars. A wireless update system will be crucial to the success of any IVI system, so that car owners can rest assured that the system in the car will remain current despite its aging.

iOS in the Car

Apple are another big corporation looking to get a slice of the infotainment pie. Their incredibly popular iPhone changed the world of smartphones in 2007, and with its new iOS 7 operating system they have announced “iOS in the car”. Partnering with some influential carmakers including Ferrari, Volvo and Mercedes, their vision sees their software (including their music and maps apps) displaying on future cars’ touch-screen displays. Not much has been said by Apple Inc since the announcement, though, hinting that perhaps it was maybe a little over-ambitious for the Cupertino company. Only time will tell.

The growing influence of technology on the industry does come with concerns. With the use of mobile phones in cars already illegal in the UK, what will the implications of having IVI systems installed in cars be? Will safety factors need to be featured, and will these compromise the ease of use of the software?

If the growing range of infotainment systems have got you wanting to upgrade your car, why not fill out a no obligation application form for car finance to find out about the ways we can help you to buy a new car!

With contributions from Tom Wood.