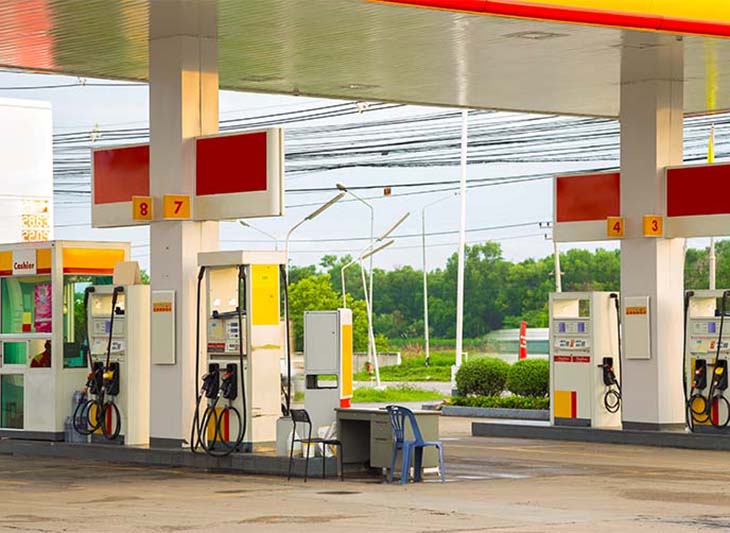 Here at Creditplus, we like to keep up to date with everything going on in the world. Especially the area around our head office in Poole, Dorset. So we took particular interest in the recent controversy surrounding the temporary oil rig set up off the coast of Bournemouth.

Producing a mixture of outrage and sorrow, the reaction to the sight made us think about oil, petrol and why there was such a strong sense of outrage from people who likely fill up the petrol tank on their car once or twice a month. Do we really care that much, or is it the fact that it is on our doorstep that is the issue?

The government first announced that an oil rig would be coming to the waters off of Bournemouth and Poole in early 2018, with an application from an oil and gas licence operator named Corallian Energy being approved pending an investigation into the impact there would be on the local ecosystems.

The surroundings of the drilling site are designated an ‘Area of Natural Beauty’ and are keenly protected by the Dorset Wildlife Trust and The Seahorse Trust, who raised concerns about the impact, not only from the drilling, but also from chemicals that would be released into the water to aid the process.

After a delay due to bad weather conditions, drilling began in winter 2018, and has continued to date. Despite finding no results at their initial drilling site, the company has hit black gold in its second attempt, with an estimated 15 million barrels of oil and gas waiting to be extracted from beneath the surface. But there have been allegations that the company has gone outside its original remit, and the talk of keeping drilling to the winter months looks likely to change.

A spokesman for Save Our Shores Bournemouth, Hannah Sharland, told the Bournemouth Echo "This reckless plan will put many endangered and protected species of wildlife, such as the two types of seahorse found in the area and many important species of fish, at further unnecessary risk. It will also interfere with commercial fishing in the area.”"

It seems that the government has gone over the local authorities heads, with Bournemouth Council disappointed that they weren’t consulted about the plans. Money talks, and if that money comes from oil and gas, it seems worth more than the potential cost to tourism and the environment that comes with it.

Not On Our Doorstep

So what is it about this oil rig that has angered people so much? Maybe it’s because its on our doorstep and directly affects our local environment. Dorset is known for its natural beauty, with the Jurassic Coast famed for its dramatic coastline and hidden fossil treasures. Bournemouth and Poole beaches were recently voted the best in Britain by TripAdvisor, and ranked high in the top ten across the world. The potential affect on tourism as people worry about the drilling, as well as the damage that could be caused by a leak, it’s a weight that is keenly felt by those living here on the coast, especially those who make their living off the tourism industry.

But is the oil rig a reminder of the price the planet pays to fill up our petrol tanks? The image of oil rigs in the deserts of the Middle East, or far out in the North Sea, are becoming tainted by the news of communities fighting energy companies searching more widely for their next jackpot. Now those in sleepy parts of the country are having to fight tooth and nail to prevent their countryside being torn apart in the pursuit of fossil fuels. Combine that with the more heightened awareness of climate change and its affects, and we are starting to feel more concerned about something that has taken place for a long time, just not on our doorstop.

Whenever the government announces its yearly budget, one of the big headline makers is the amount of tax on petrol. If you add to that the concern that hits the media when prices fluctuate too much, its clear that one of the most important things to many people in the UK is the cost at the petrol pump.

Having more sources of oil and gas means more fuel, which should mean fuel prices are reduced. So are we happy to risk our environment if it means we save more at the petrol station? Or will prices stay the same no matter what the result.

Reducing our carbon footprint is on a lot of our minds at the moment. The cost to the environment and increasingly extreme weather conditions is a reminder of the effect we have as the human race. But we should also be aware that 75% of carbon emissions are from just 100 companies. And while there is a lot of pressure on our shoulders, we should not lose sight from the fact that a lot of misdirection is in place to put the onus on the consumer, rather than big business.

So What Can We Do?

Driving less or more efficiently is something we should all try and do. Whether its walking short distances, using public transport, or arranging a car share, if we all do our bit, then we can help lessen the impact on the environment.

Newer cars have much more efficient engines, and if you decide to upgrade your vehicle, why not look for a hybrid or even a fully electric car? The technology has rapidly improved over the past few years, and government incentives mean there has never been a better time to go green.

If you want to upgrade to something with less of a carbon footprint, then Creditplus can help you find and finance a fantastic new electric vehicle. Whether it’s a hybrid or a full-electric, your dedicated customer advisor can help find the perfect vehicle for you. Apply online today and start on the road to reducing your carbon footprint.


LEARN MORE ABOUT OUR ETHICAL LENDING...