Formula E had its grand finale this past weekend with two races in London. The driver’s championship went down to the wire with three driver’s going into contention as they lined up in Battersea. An exciting season had an exciting end as Piquet was crowned world champion.

The first ever Formula E season came to an exciting close this weekend, as the race calendar hit London for a final double header. The venue was Battersea Park, converted into the Visa London Formula E Prix circuit for two races across the weekend. The first race took place on Saturday, Sebastian Buemi winning to set up a tense finale on Sunday. His third win of the season, Buemi took the victory with little incident, the race on a whole quite staid compared to previous weekends. The third win of the season put Buemi in contention for championship victory come Sunday’s race. One thing that was settled on Saturday was the constructor’s title, with Buemi’s team e.dams-Renault claiming an unassailable lead going into Sunday’s finale. 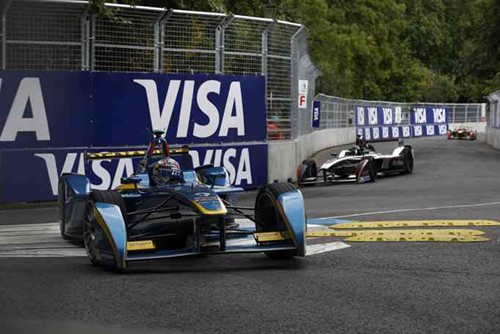 Sebastian Buemi in action on Saturday. His record 3 race victories across the season was not enough to win the title.

The final race was much more exciting, perhaps spurred on by coverage of the race running live on primetime ITV. As they lined up on the grid, two drivers had a realistic chance of winning: Saturday’s leader Sebastian Buemi and Nelson Piquet Jr., son of former F1 champion Nelson Piquet. The first half of the race had Buemi taking victory, comfortably ahead of Piquet and looking like he would clinch the title. But the mid race changeover of cars threw a spanner into the works, especially after Buemi spun coming out of the pit lane. The gap in the table closed to equal points, Piquet having to climb one position from ninth to eighth to have any chance of victory. Luckily for him, the driver ahead was team mate Duval. Whether he was let through or not is open to debate. Piquet passed Duval, placing the pressure back onto Buemi. 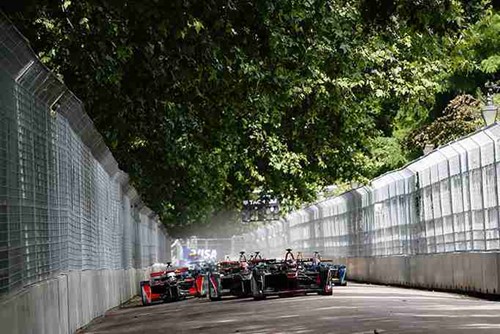 The Formula E cars leave the starting line on Sunday.

Going into the final few laps, Buemi had to move up one position to win the title. Standing in his way was another son of a famous Brazilian driver – Bruno Senna. Whether it was national brotherhood or just racing pride, Senna would not back down, Buemi pushing hard only to find Senna blocking his path. Time ran out and it looked like it was all over. But there was more late drama to come. 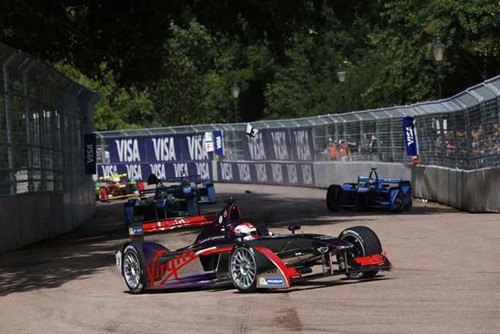 At the head of the pack, Sarrazin had led from start to finish but crossed the finish line having depleted his race allowance battery charge. A post race drive through penalty bumped him down into 15th place, giving victory to local Virgin driver Sam Bird. But what affect would it have on the championship? Piquet crossed the line unsure if he had won the title or not, team radio broadcast the Brazilian thanking his team. When the ITV commentators spoke directly to Piquet as he drove his car back to the paddock, he was still asking “Have I won?” 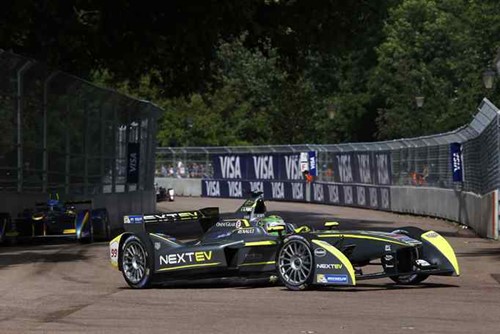 Piquet raced hard to claim the championship by a fraction.

Luckily for Piquet, the points difference remained the same despite Buemi and himself being bumped up a place. This gave Piquet the first championship victory in Formula E history, 1 point ahead of Sebastian Buemi. 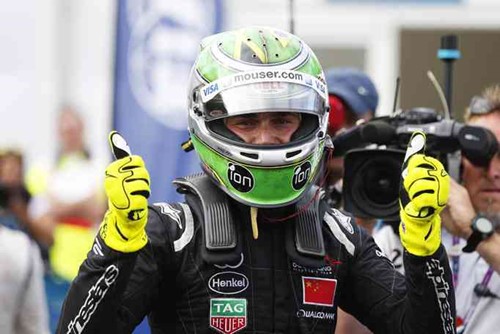