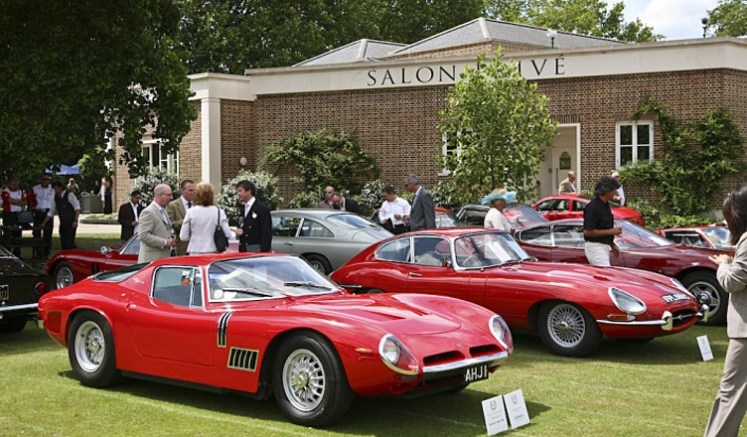 Salon Privé will play host to a spectacular trio of hyper cars this September. The offerings will come in the form of an Aston Martin Vulcan, Ferrari FXX K and McLaren P1 GTR. That is probably a better line up than the last festival you went to.

Salon Privé is one of the world’s most prestigious motor shows, held at the World Heritage site of Blenheim Palace in Woodstock. It’s held over three days, between Friday 4th September and Sunday 6th September. Tickets are fairly reasonable for the Friday and Saturday, however, if you want to see the judging on the Sunday you’ll need to drop well over £300 to attend. It’s a pretty classy affair so if you were planning on going, try not to turn up with your dinner all down yourself.

The Vulcan, FXX K and P1 GTR will be on display in the highly exclusive Salon Privé village and will be joined by a vast and unmatched selection of some of the most luxurious and beautiful cars on the planet. In fact, due to the calibre of cars that turn up at Salon Privé it is likely that the hyper trio won’t even be the most exclusive cars at the show, despite the fact you have to be invited to even purchase one of these monsters. Okay so they might not be the rarest cars on show but they sure as hell will be the most powerful cars at the show. Nothing will come close to touching these three, save for any Formula One cars that might be kicking around.

Now for a bit more information about these world eaters.

This bad boy is so exclusive that you don’t even get to drive it. I jest, except I don’t really because this GTR version of the McLaren P1 is track only so you actually can’t drive it on the road. Probably for the best really because it really would not be safe to unleash a vehicle like this on a public road.

The GTR name has risen again from the annals of history twenty years after the McLaren F1 GTR won the 24 Hours of Le Mans. They wouldn’t resurrect such a prestigious badge without good reason and the 3.8-litre twin turbo V8 engine combined with the electric engine produce more than 1000 reasons. The petrol and electric engines produce about 800 bhp and 200 bhp respectively, that’s a lot of power.

Drivers of the P1 GTR receive world class driver training and the level racing expertise and know how you would expect from McLaren, they aren’t about to let someone out on a track with a car of this nature who is just going to smash it up because they can’t drive. You might have bought this car but McLaren decide what you do with it.

On to another car that you can’t actually drive around, the Ferrari FXX K. This is another track day special and you couldn’t even drive it on the road if you wanted to. When you buy the FXX K you get two years of Ferrari support, meaning they will deliver your car to the track (yes that means you don’t even get to keep it at home) and essentially be your pit crew. However, you get this service for two years and if you want to continue it after those two years are up, you’ll need to shell out even more money. That is a lot to ask considering the FXX K will cost you just shy of £2 million!

The Ferrari packs a 6.3-litre V12 engine which produces 860 bhp and an electric motor producing 190 bhp , all together the total output of the vehicle is 1036 bhp. The K on the end of FXX actually stands for Kinetic Energy Recovery System, which you might recognise as being a technology lifted directly from Formula One.

This FXX K is definitely the most striking of the three cars, it’s gulwing doors and strange back wing are bound to draw crowds but I don’t think it’s the prettiest one, that award has to be given to our next car.

I have a bit of a love affair with Aston Martins so my opinion might be somewhat biased but I don’t think anyone could disagree when I say that the Aston Martin Vulcan is the best looking of the trio. I’m not saying it’s a particularly pretty cars by the way, this machine is not built with aesthetics in mind, it’s built for speed. That being said, it keeps the sweeping lines and sleek shape that Aston Martin is so famous for, albeit with some slightly gaudy additions to it.

You can’t drive this one on the road either, track only just like the others. It is pretty exclusive too, only 24 will be made. You don’t get to buy one a just hop in it at the track though, oh no, that would be too easy. First you must complete the driver training course which consists of a few stages. First you have to complete the Vantage GT4 section, then you move on to the One-77, once you complete that you are allowed in to your Vulcan. Although you must work your way up through the power setting, from 600 hp to 700 hp and finally to the full 800 hp.

The Vulcan houses a 7.0-litre V12 which produces 800 bhp, the Vulcan is the only one of the three without an electric engine to compliment the petrol one, which is why it is down on power to compare to the other two. However it is still capable of 0-60 in less than three seconds and will continue past 200 mph.

If you fancy feasting your eyes on these three monsters you’ll need to get yourself down to Salon Privé, chances are slim you’ll ever see one out in the wild that’s for sure.

If you enjoyed this blog, you might like to take a look at some of our others!

Presentation is everything. Find the car to match your ambition.