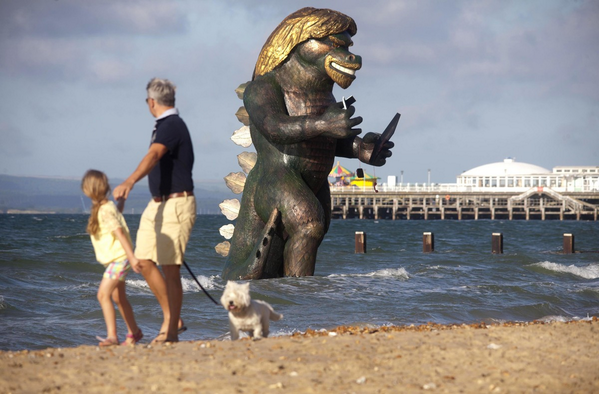 Last week a blonde, bearded Godzilla figure appeared emerging from the sea at Bournemouth Beach, which is just down the road from our offices in Poole. This creative marketing stunt worked as it certainly got everyone talking and news quickly spread that it was part of a Virgin Media PR stunt. Not 100% sure what they were advertising for, but that doesn’t matter, they’ve given me another reason to connect with them. Clever Virgin Media Marketing team! (News in: Our creative engagement officer Tom just told me that “Virgin Media created the creepy tribute to its media mogul boss to promote its new Big Kahuna quad-play bundle offering TV, broadband, landline phone and mobile as part of a value package”).

Capturing attention in an unconventional way that writes its own headline and generates it’s own buzz, is not a new thing and it’s something that the automotive industry have been doing for years.

Car manufacturers in particular are experienced at creating buzz amongst their audience, keeping their campaigns very much in line with their brand messaging. These short campaigns / creative promotions help move a latest make or model to the top of our minds for just long enough to create interest, show brand personality and the manufacturers drive to make things happen!

A recent example of automotive creative marketing was the campaign from Ford to mark the 50thanniversary of the Mustang, Ford repeated a marketing stunt for the first Mustang (1965). Cut into 7 pieces and reassembled, the car sits a top of the Empire State Building. 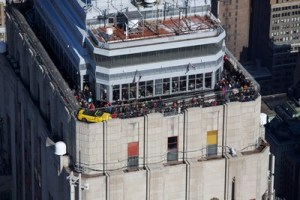 There is a lovely collection of photos to view over at Forbes.com website explaining how they put the Mustang on The Empire State Building back in 1965.

The Digital Marketing team at Creditplus love to gain inspiration from others and sharing with you a selection of our favourite marketing stunts from the automotive industry. You may also be interested in viewing this post on 9 of the craziest marketing stunts pulled off by automakers over at Business Insider.

Lamborghini had the best idea on how to promote their Supercars and handed a few of them over to their local police. They even taught the Italian police force how to drive the 560bhp Gallardo. This gained worldwide coverage. There is a lovely 2008 Gallardo currently in our vehicle database with a purchase price of £94,995, monthly payments range from £1.5K. 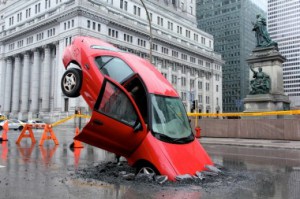 This was a fab marketing stunt to draw the attention to the use of a Canadian-based app called “pothole season”. To encourage people to report potholes via the app.

To launch their newest small car, The Sonic, Chevrolet literally launched it from a ten-story high tower of ocean shipping containers on a bungee rope. The idea behind this was that web viewers would make this launch happen, every time they clicked a button on a dedicated promotions page on the words ‘lets make this happen’ the car got closer to the edge. That button received 2.4 million clicks. You can watch the launch here: 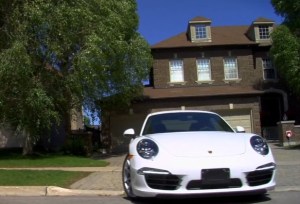 Porsche certainly know their audience. In order to increase test drives of the Porsche 911 Carrera S, they drove it around an affluent neighbourhood and took pictures of the Porsche driving off from homeowners drives. They then printed the photo and made it part of a personlised direct mail shot to the home owners. The campaign was a success with a 32% response, which is way over the average 2% response that direct mail usually receives. We regular feature the Porsche 911 Carerra on our vehicle database, currently we are advertising a hot looking silver 911 with affordable monthly payments from £410 a month. View all the available to buy or lease Porsche’s here. 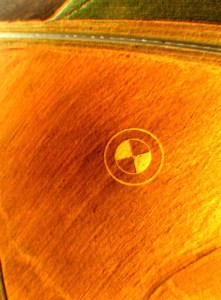 The BMW Crop Circle! Can you remember in the early 90s that crop circles seemed to be cropping up everywhere! (I couldn’t help myself!). Well BMW joined in. In a field outside of Johannesburg, South Africa during the first week of February 1993, the media were reporting whether this might be the work of a UFO. Whilst interest grew of the circle, only a few noted it was a BMW logo. After all the free publicity on TV and Newspapers, a TV advert was aired (by BMW ad agency) showing aerial views of the circle accompanied by the tag-line, “Perhaps there is intelligent life out there after all”. Nice one BMW, you never fail to disappoint.

This is quite a recent campaign launched in January this year by Nissan to promote the Nissan Versa Note. Nissan invited three people to order the new car through Amazon via a promotional link and the car then arrived in an oversized Amazon box. Social media caught hold of the oversized parcel, with this image appearing on Reddit: 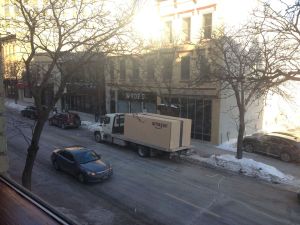 Nissan later reported that this was a one time promotion available for 3 customers, the reason being that cars are currently not available to buy on Amazon! In a statement from Nissan: “The actual purchase, the actual transaction, does have to take place with a dealer. We have wonderful dealers nationwide, and we want our dealers to have relationships with our customers.”
The Nissan Note received some great reviews praised as being lovely to drive, affordable hatchback, low running costs to suit a small family. For more reviews, visit a lovely selection of car reviews from our customers here. 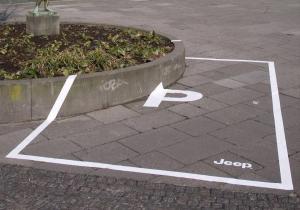 Chosen mainly for the reason that it is so simple but so effective. We found this really clever floor sticker advert advertising parking areas for Jeeps only, on Pinterest.
Jeep have a huge social media community and we’re sure this went down very well.

Introducing the Mini Photo Box stunt which built on the Mini’s ‘make it personal’ culture and featured photos from the public projecting them onto a billboard in front of their eyes. Find out more at the video below.

There was another great idea from Mini’s creative team, where an advertising agency attached 3 foot tall red helium balloons to their cars, which read “Your MINI is parked here” to minis in large city carparks in Canada. Giving mini owners a quicker exit out of the car park over the festive season. It was promoted as a Mini random act of kindness. We know someone who would have loved to have engaged with this campaign, Louise talks here about what her Mini says about her.

Coming in at number one is a fun to watch marketing video from RMB Car Dealer group, showing off the lovely Toyota GT86 (you can search for the GT86 here) in a prank test drive. The passengers comment, “He was waving the flag”, makes us chuckle. The video shows the firm handling of the Toyota GT86 and features the British driver Russ Swift, known for his stunts and precision driving.

This list proves that with motoring marketing it pays to be creative, do something unexpected and give customers a way to share that story. We are feeling inspired and who knows we may do something crazy creative soon, it won’t however be at the scale of the video below which was created by an Italian insurance company and shows a submarine appears to be rising out of a city street in Milan! Watch our Creditplus Car Finance Facebook page for our creative updates. If we haven’t listed your all time favourite automotive marketing stunt, please let us know on our social channels or by leaving us a comment below.

If you're thinking about upgrading your car, Creditplus can help you. With over 90 lending options, we have flexible finance packages to suit all budgets. Plus, with our Find, Fund and Deliver service we will even deliver to your doorstep at no extra cost. Apply online today to find out how much you can borrow.