Which Car Manufacturers are the Most Social

Which Car Manufacturers are the Most Social

Today businesses flock to Facebook and Twitter trying to make good use of the new-found marketing tools. Many do it because an “expert” has told them this was the next big thing, nevertheless, there are very few businesses that actually make social media work for them.

Car manufacturers are no exception. Most of them have the resources and the drive to build an enviable following. Does this effort translate into sales? It’s difficult to tell. What is obvious, though, is that some manufacturers have understood the model of social media marketing while others still struggle to get to grips with the new marketing methods. We have compiled a list of 100 main car manufacturers and looked at their fanbase growth on monthly basis.

Although the main focus may be on the fan/follower numbers, an important metric to pay attention to is the number of “adds”, i.e. times a Twitter account has been listed by other tweeps. On Twitter it’s relatively easy to gain followers – you simply follow people and hope they return the favour. What is much more difficult is to get listed. A follow is not a vote of confidence, an “add” is. If your account is regularly added to relevant lists by other people, it means they consider you an important voice within your industry.

Although several car brands did poorly at growing their Facebook fanbase, one company caught the eye – Hyundai UK managed to shed 215 fans becoming the only manufacturer with a negative growth percentage at -0.43%. Although their Twitter account fared a bit better, posting a 6.60% growth, it can’t be considered an achievement by any stretch of imagination. If you look at how many times Hyundai’s Twitter account has been listed, the number has stubbornly stuck at 23.

What is Hyundai doing wrong, you may ask? The answer is rather simple – they’re committing one of the biggest crimes in social media. No, I don’t mean trolling or cyberbullying, what I mean is egocentrism. Majority of their posts on Facebook and Twitter start with one of the socmed no-no words: we, our, us, I. 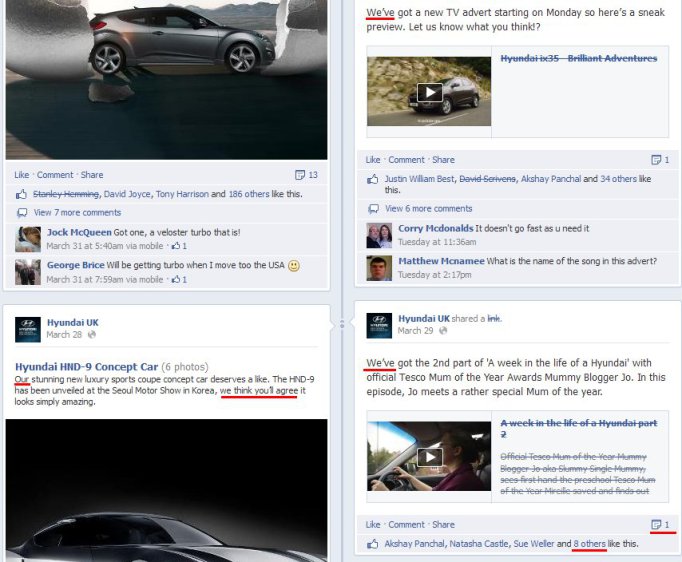 Look at the picture. How arrogant is that? Don’t assume something you’ve created is amazing, ask your fans what they think. Make them feel like their opinion matters. But it gets “better”. Let’s look at their Twitter account, which has managed to grow by 119 followers during March without attracting any new “adds”.

The Twitter feed mainly consists of them apologising on behalf of their car dealers. Don’t get me wrong, Twitter is a great extension to your brand management effort and your support team, still, you want to dilute the support messages with something more attractive so that if I visit your Twitter account, it instantly gives me a reason for wanting to follow you. As far as egocentrism is concerned, take a look at this tweet:

So, to get this straight, you’re using your Twitter account to express gratitude towards yourself? It’s not exactly how Twitter works. And it’s a pity because it’s a really positive message and if worded in a more amiable manner, it would have attracted the retweets it deserved. As it is, it got one retweet. Guess by whom? Tug of War – the beneficiary of this charity event.

It’s been an important month for Land Rover – they’ve been busy preparing for the launch of the new Range Rover Sport and unsurprisingly, their Facebook newsfeed has been blatantly shouting about it. How do you get through the month by spinning a single topic without losing fans? You tell a story! Surely, the LR did have an advantage – the story was centred on James Bond taking delivery of his long-anticipated Range Rover Sport.

Many smaller companies trying to make it big in social media don’t have the resources to hire a popular actor to take part in their campaign, however, the takeaway is that a good story sells. And when it comes to Facebook, wide-format images work better. If you look at the LR’s newsfeed, you can see that their visuals are pretty amazing. It makes you want to share it.

They normally get 3,000 to 10,000 “likes” on each post that has something interactive about it or that is part of a story. But then even a rather insignificant post about a launch of Austrian LR Facebook page gets 500+ likes. 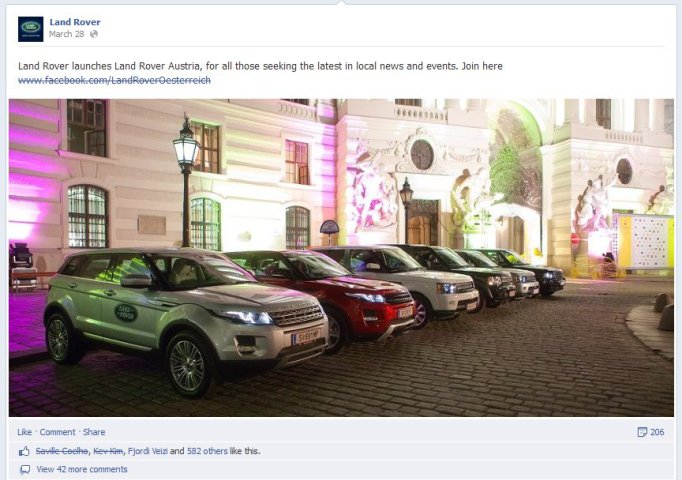 Unthinkable! Why would 500 people care about Land Rover launching a foreign Facebook page? In normal circumstances it would have received just a handful of likes but in this case the image is truly amazing and you unintentionally “like” it without realising that the news itself has very little relevancy.

As a result, Land Rover UK makes our Top10 winners with 49,000 new Facebook likes and 2800 new Twitter followers. They’ve been listed 15 times during March and considering they’ve only sent out 40 new tweets, it’s a great result. For example, it took Volvo USA 383 new tweets and 4800 new followers to get listed 18 times. So, it’s not always about the volume. You don’t need to be tweeting multiple times per day to make an impact.

There are two camps of social media experts – one that swears by using a hashtag whenever possible and the opposing one that says using hashtags make you look like a dummy. Then there are stats and they, as you know, never lie. The stats say that a proper use of a hashtag is truly justified and can really help lifting a socmed campaign. With their #FTYPEdesire campaign, Jaguar shows us that a hashtag can really be pivotal to success on Twitter.

The #FTYPEdesire is a well-planned multilateral campaign involving filmmaking, music, competition and sharing experiences. It was definitely not a cheap campaign but there’s still stuff that everyone can learn from it.

Jaguar launched the campaign on 28th November 2012 with this tweet.

They repeated the tweet 3 times in total to catch people from various timezones: 1AM, 9:30AM and 4:30PM GMT. Of course, each time it was worded slightly differently to avoid tripping the Twitter’s dupe filter. It is clever because many people make a mistake by assuming that if they have 1000 followers, their message is going to be read by 1000 people. That’s simply not true. If you’re lucky and you hit the right time, your tweet will be seen by around 1-2% of your follower base. So, if you have something important to announce, make sure you repeat the message. Of course, you want to space out the repeat tweets with something else otherwise you’ll annoy the hell out of your followers. Jaguar then continued using the hashtag sporadically during the early December revealing more and more facts about filming new scenes. This serialised approach usually works very well. If what you’re doing is interesting or thought-provoking, people are going to look forward to the next instalment. It’s the best position you can be in when it comes to social media – make people want more of your content instead of trying to persuade them to pay attention. Up until early February the #FTYPEdesire hashtag was used exclusively in the context of the film. Then a couple of days before Valentine’s Jaguar came up with this tweet: https://twitter.com/JaguarUK/status/301265350438305792 suggesting that it might not be all about the film after all. The culmination arrived on Valentine’s Day with everyone talking about Lana Del Rey’s new song “Burning Desire” featuring the F-Type car. Then a month later Jaguar announced another dimension to the hashtag by launching a Facebook competition. The idea was for the people to submit their desires and for Jaguar to make some of the wishes come true. https://twitter.com/JaguarUK/status/311115757448728579 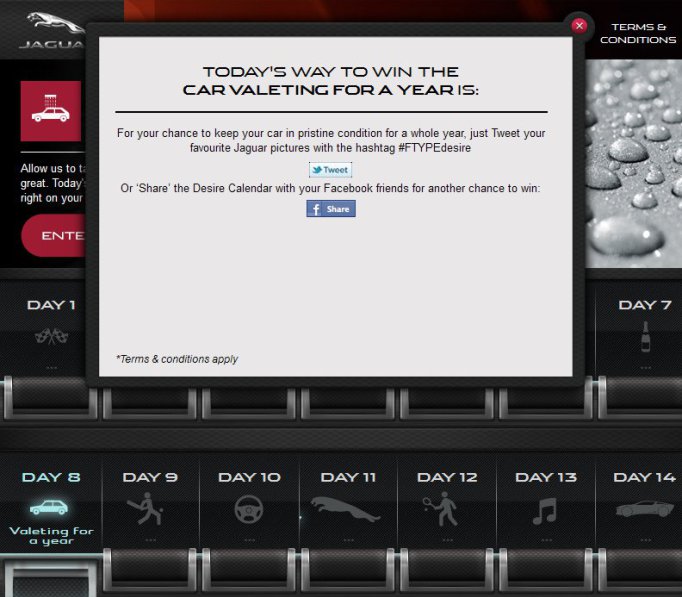 From the moment the hashtag was repurposed before Valentine’s till the end of the first week of the competition, the hashtag was used almost 800 times. It was used by 350 people. Do you think they were the so-called social influencers who gave the #FTYPEdesire the lift? No, 300 of those people had fewer than 1000 followers, in fact 195 of them had fewer than 300 followers!

In reality, 95% of the people who matter for your social media campaigns, people you actually want as followers, will have a follow rate larger than 1. Unless you’re a celebrity, a big brand or a social media “expert”, it’s very difficult to maintain a below-one follow rate. Yes, there are techniques to do it but your average follower won’t be savvy enough to. So, if you’re ignoring all tweeps who have a bad follow rate, you’re most likely ignoring the best part of your potential audience. Worth reconsidering?

In my opinion Jaguar has carried out an exemplary social media campaign. Yes, you may argue that having Lana Del Rey, Damian Lewis and Ridley Scott Associates on board will have helped a lot, as have the presence of a popular website and a pre-existing Facebook fanbase, but you can’t deny that the way they’ve executed hashtag priming is truly remarkable.

Although considering the execution of this campaign, I expected Jaguar to do better numbers-wise, their growth is not to be sniffed at. They have managed to get onto our Top10.

From the launch of the competition to the end of March they’ve grown their Facebook fanbase by 13,596 people, Twitter following by 414 and Instagram following (Jaguar is one of the very few car manufacturers active on Instagram) by 1,299.