The cars of Mad Max are some of the most iconic vehicles to ever hit the silver screen. Beautifully broken combinations of twisted metal and savage weaponry, each vehicle looks like it has driven straight off the scrapheap. The latest film “Mad Max: Fury Road”, arrives in cinemas this week, thirty years after the last outing “Beyond The Thunderdome”. We take a closer look at the incredible post apocalyptic cars that have helped make the series so popular.

Mad Max: A Grim Version Of Our Future

2060 AD. Years after the catastrophic events that destroyed global civilization, former highway patrolman “Mad” Max Rockatansky roams the desert wasteland trying to avoid the roaming bands of maniacs and psychopaths that inhabit the post apocalyptic landscape. Family murdered, with water and petrol dangerously scarce, Mad Max must fight to survive every day of his life. Combining deranged costumes, bone crunching violence, and thrilling car chases, Mad Max has become one of the iconic film franchises of the 20th Century. 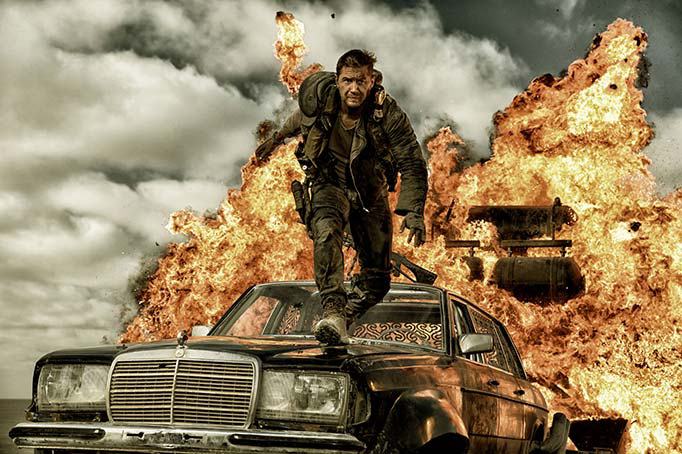 Originally played by Mel Gibson, the character of Mad Max helped turn the young Australian actor into a global superstar. Now 59, Gibson was originally set to return to the newest installment Fury Road. Delays in production, combined with Gibson’s troubled personal life, meant a new star was sought to fill Max’s boots. Enter Tom Hardy. Revered as one of the finest actors of his generation, Hardy had been looking for a blockbuster series he could call his own.

Joining Hardy in the film are Charlize Theron, as Furiosa, Nicholas Hoult, as Nux, and Rosie Huntington-Wheatley as The Splendid Angharad. Filmed in the deserts of Namibia, filming began back in July 2012 and was completed by the end of the year. Finally coming to cinemas this week, director George Miller has described the film as “a western on wheels” and claims that 90% of the effects are practical. The results, speak for themselves.

The true highlight of the Mad Max series are the fantastic cars. Growing progressively weirder with each film, ever car that appears on screen has been customised to reflect the unforgiving, hostile world where the films take place. The newest film is no exception, with the designs more extreme than ever before.

First appearing back in the original Mad Max, the Interceptor is the iconic car of the series. A converted XB Falcon Coupe, the car has been modified with a belt driving blower to give an extra kick to its V8 engine, you may be wondering the logic of driving a V8 engined car when there's a petrol shortage. Mad Max isn't about logic. It's a world gone mad, a world where you need the best to survive. What better way to outrun your enemies then in a classic muscle car? 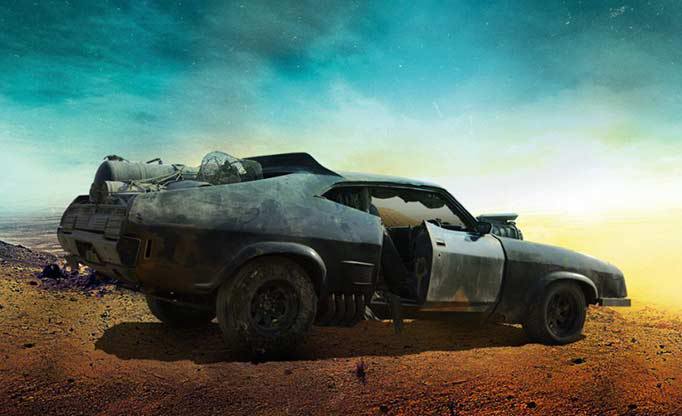 The other main vehicle in the new film is Furiosa's massive War Rig. Fitted with twin V8s, 6 wheel drive, this eighteen wheeler monster is used to trade petrol, munitions and water between the different warring factions. Armed to the teeth, a dozen deranged armed guards travel onboard the rig as it makes its dangerous journey across the wasteland. 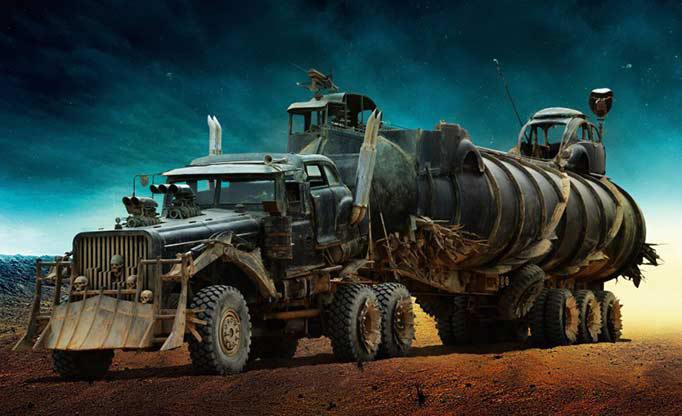 One of the crazed antagonists of the film, The Nux Car belongs to the fanatical...Nux. Built on the body of an old Deuce Coupe, the car is super-turbocharged and nitrous-boosted to aide Nux's drive to valhalla. Fitted with the decorations of his religion, the spiked flags and front mounted crucifix allow him to punish non believers. 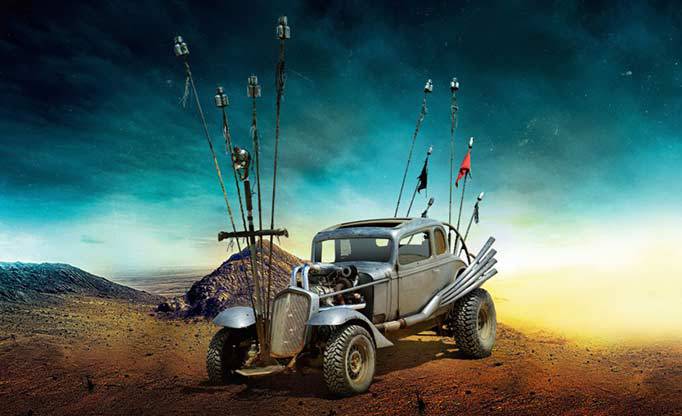 Those magnificent men in their murder machines

Director George Miller's commitment to keeping the film practical led to a whole horde of fantastic machines being custom made for the film. Here is just a sample of the incredible cars on show. 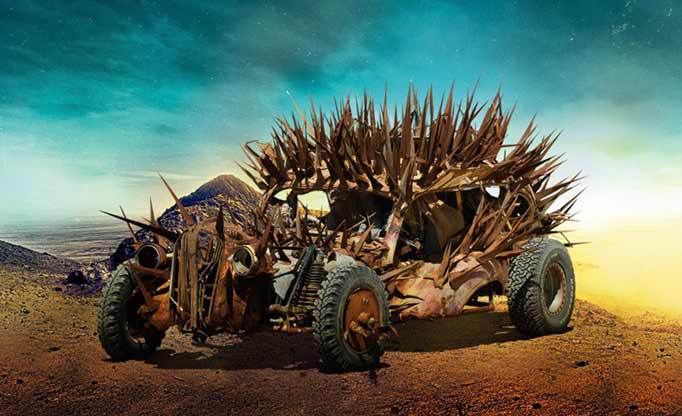 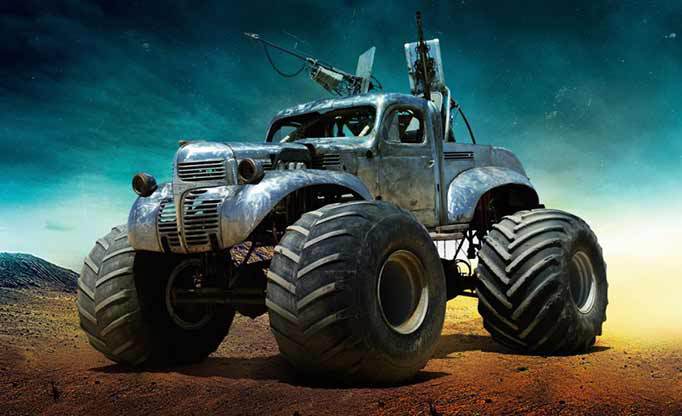 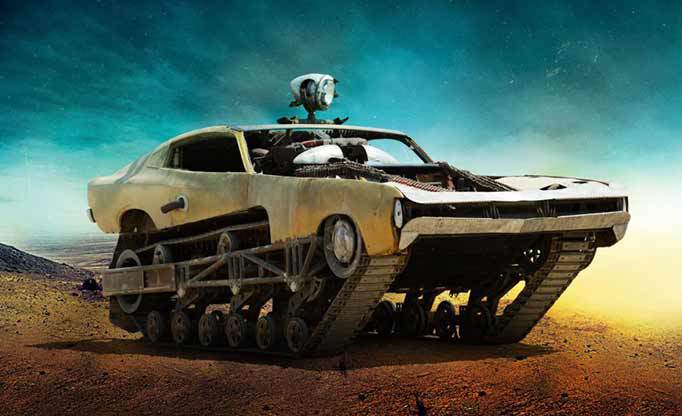 The Peacemaker - A Merlin V8 made a bit more...tank. 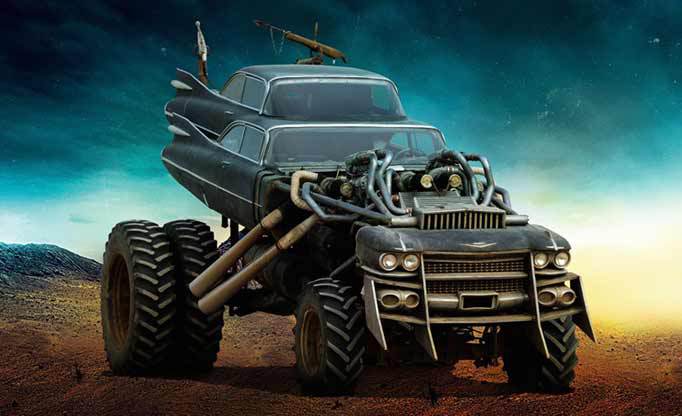 The Gigahorse - A pair of Cadillac Coupe de Villes fused to a monster truck body. 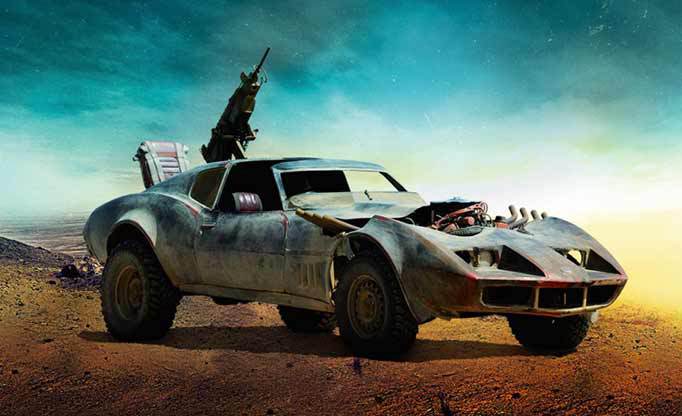 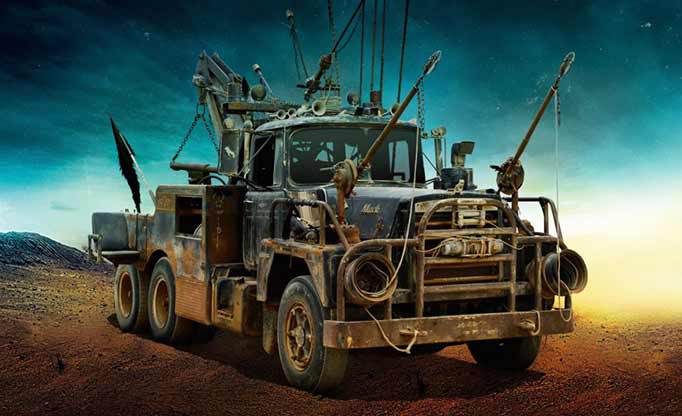 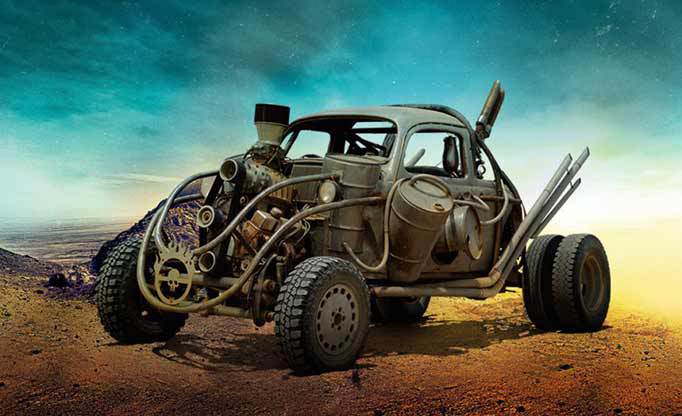 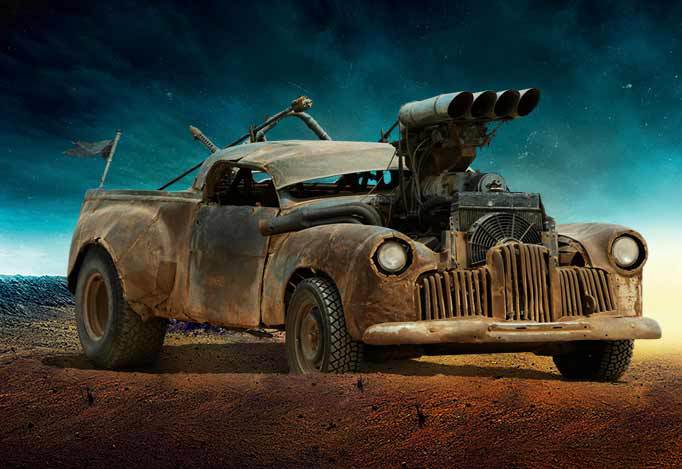 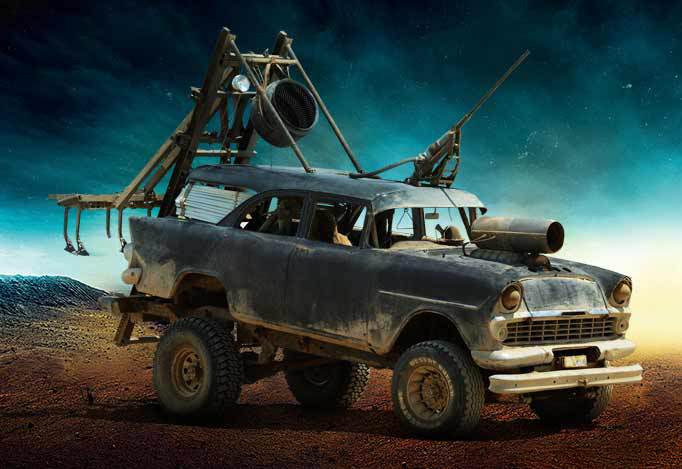 The Ploughboy - A massive EH wagon fitted with a harpoon for hunting. 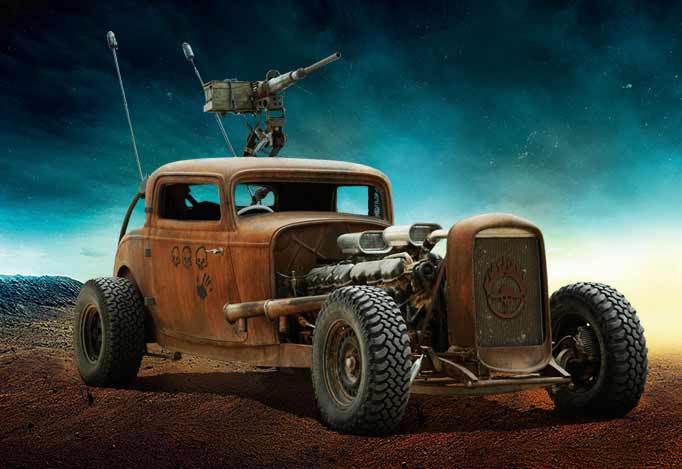 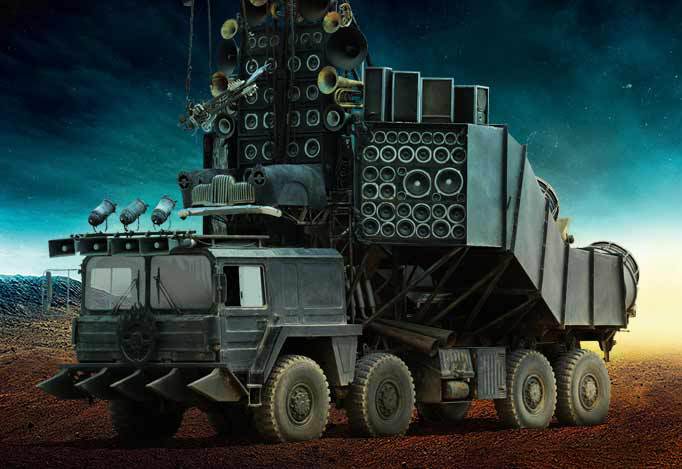 Doof Wagon - The beating drum of the wasteland. A row of speakers and a madman on guitar.

Fury Road was made with a budget of $150 million, a huge team of production designers and vehicle wranglers able to create huge monstrosities like nothing seen before. This wasn't always the case. The first Mad Max film had to pull in every favour to ensure that it could be made. Local Hells Angels gang members were hired as extras, some paid with nothing more than a 24 pack of beer. Director Miller even sacrificed his own Mazda Bongo for one of the scenes, having it obliterated by a car driving straight through it.

Aside from the cars, the other big draw of the Mad Max series is the stuntwork. The first three films were made before CGI became the norm, so you can really feel every impact. As well as the lack of digital effects, being funded and filmed in Australia gave the series a more loose, maverick feel. The first film in particular feels like it was filmed almost guerilla style, the crashes are that real. Another thing that was real was the speed. Most of the chases took place at full throttle, giving the film a realistic feel that hadn't been seen before.

After the success of the first film, the action ramped up for the second. More vehicles and more mayhem. Again, you could feel every impact as cars and bodies flew through the air.

To get an idea of just how physical the action was, one stuntman almost lost his life. Now working as stunt coordinator on a wide range of Hollywood films, stuntman Guy Norris almost lost his life on the set of Mad Max 2. The stunt was known as the cannonball. Norris was to ride his motorcycle into a crashed buggy, jumping off at the last possible minute to send him flying through the air. Norris jumped off too late. Instead of flying through the air, Norris was tossed, spinning violently until landing in the cardboard boxes designed to catch him. Norris broke his leg, the impact so violent that it had bent a pin placed in his leg after a previous accident. Norris was forced to step back from filming for the remainder of the shoot. The shot was a success though, and became one of the most memorable stunts in the film.

For Fury Road, a new technique was designed to create the film's spectacular opening. Max drives his interceptor away from his enemies when the car flips, rolling over five and a half times before crashing to a stop. Once again, Guy Norris was in control of the car. To make the stunt appear as real as possible, a nitrogen powered pole cannon was fitted to the bottom of the car. Driving the Interceptor to a speed of 60 mph, Norris turned the car sharply and flicked the switch. The Interceptor rolled over five and a half times. In practice sessions, Norris had been able to flip the car eight and a half times - what would have been a world record if caught on film. 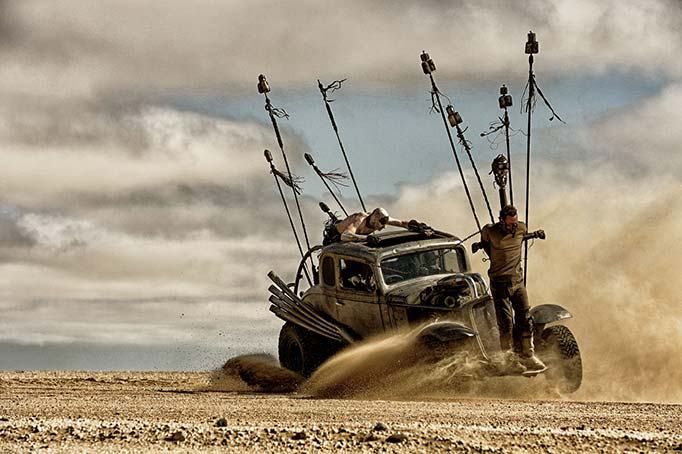 The first reviews are coming in for Mad Max: Fury Road and it seems that this is the best Mad Max film of them all. A 2 hour long chase movie, the intense action scenes filmed with a focus on realism and excitement have driven film critics wild. Thirty years after the last film, the passion and appetite for the bizarre cars of Mad Max has not gone away. If positive reviews lead to a healthy box office, then we can expect to see more Mad Max on our cinema screens in years to come. Something we should all be very grateful for.

The Cars of Fast and Furious - Ten of the best cars to appear in the action series.

Icons of Motoring: Steve Mcqueen - We take a look at the king of cool and his collection of cars.