Driverless Trucks | The end of the long distance lorry driver?

Driverless Trucks | The end of the long distance lorry driver?

The image of the trucker driving long distances to deliver cargo is one of the most universal images of the 20th century. Whether its travelling the long highways of America, or lorries queuing for the channel tunnel, it’s an image we are all familiar with. But the trial of new driverless truck software in America could mean big changes in the logistics industry. Could this signal the end of the long distance lorry driver?

Nevada, USA. The American truckers travelling long distances cross country, arms turning red from sunburn as it rests on the driver window, will soon be joined by the futuristic technology that could one day replace them. Daimler have recently been granted a licence to test their driverless truck on the roads of the “Silver state”. Dubbed the Freightliner “Inspiration Truck”, the autonomous vehicle uses a combination of GPS, video cameras and radar to navigate its way across America’s highways.

Whilst autonomous, this early model still requires a human operator onboard. When the truck reaches speeds of 50mph, the operator stops driving. Instead, they switch on the autonomous system and the truck drives itself. The driver is there to monitor the truck’s systems, only stepping in if something goes wrong. With the truck driving itself, the operator is free to work on other tasks, the driver’s seat able to rotate 90 degrees to a desk or workstation. Without having to worry about focusing on the road, the driver can even take time to catch up on a TV boxset, play computer games, etc. Innovation that should make life easier. But is an autonomous truck better than a human driver?

One of the key benefits highlighted by manufacturers of autonomous vehicles is the potential for increased safety. More cars than ever before are on the road, with current infrastructure often struggling to keep up with the increased traffic volume. Roads that cannot cope often become more dangerous. Congestion also increases the chances of accidents – more cars on the road means more cars to hit. The problem with large heavy goods vehicle is the damage caused when they are involved in accidents. Crumple zones or not, being hit by a ten tonne lorry will cause serious and often deadly damage.

The very nature of the trucking industry adds to the problem. Transporting goods long distances means a lot of time on the road. Driver’s can easily become tired, even with the 9 hour limit imposed on UK truck drivers. Tight deadlines also mean that drivers often push themselves a little too far. With autonomous trucks, you won’t have that problem. As long as everything runs smoothly, there is no need for the truck to stop except for refuelling. Computers also don’t get tired, so errors caused this way will be negated. The advance computer systems onboard should also prevent any road traffic accidents. These systems are still in development and existing technology is suffering from some teething problems. There have been several reports of Google’s autonomous cars crashing this year, despite the safety systems in place. But many drivers adhere to the rules and deliver there goods in a timely and safe manner. So is it all about safety or are the economic reasons much more persuasive? 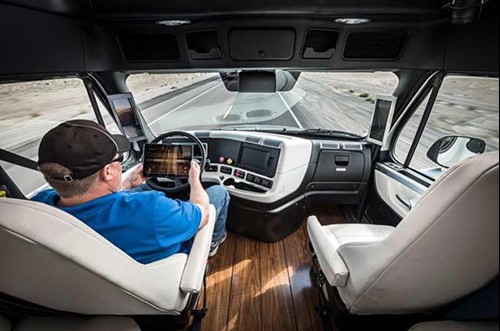 Driver’s will not have to monitor the road so closely.

No minimum wage for a robot

A machine that requires no rest breaks, only stopping for fuel, is surely a huge appeal to logistics companies that want to deliver to their customers. Whilst initial technologies require human operators, whose to say how long it will be before the technology is so refined that a human is no longer needed? Autonomous cars are predicted to soon be commonplace, making the roads even easier to navigate as every vehicle becomes connected. No more traffic jams. No more accidents. Just an easy path for driverless trucks to drive all day and all night.

According to the European Union, an estimated 75% of all goods traffic is transported by road. This number is expected to increase over the next few decades. And if driverless trucks prove to be a success, that percentage can only increase. Using human drivers means respecting things like employment laws and paying a fair wage – something that employers would see as a negative when compared to the autonomous technology available. Rightly or wrongly, human drivers would quickly be replaced. 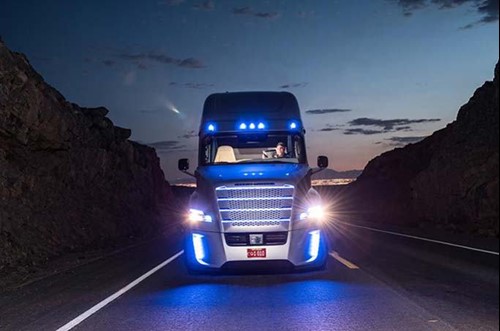 There are already several examples of automated technology in place in low speed environments. Self driving trucks are used in the mines in Pilbara, Australia, whilst the Tilbury docks have seen a huge change as automated cranes can unload container ships quickly and efficiently. This has led to many former dock workers being made redundant by the new technology. An unfortunate side effect of technological progress.

Autonomous trucks – not taking over just yet 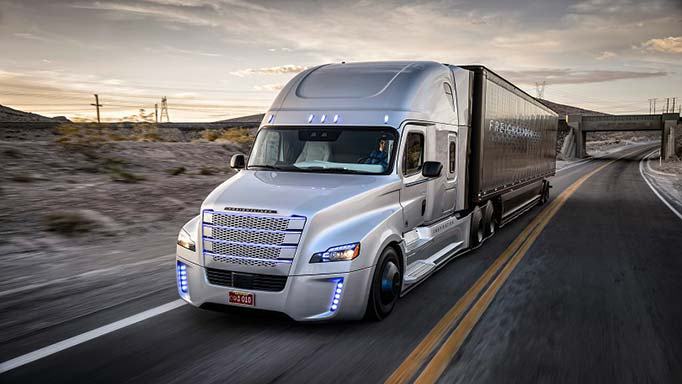 The good news for truckers is that they are not on the way out just yet. The prototypes being tested still require a high level of human input, especially when navigating busy urban streets. Primarily for motorway driving, the autonomous technology will take more than a few years to fully replace human operation. As well as technological limitations, government regulation will also have an affect. The whole concept of autonomous vehicles provides new challenges for lawmakers as they look to create the right regulations and rules for this new type of vehicle. A recent law passed by the US government approved autonomous vehicles albeit with the condition of a human operator still onboard and with the power to take control. Relying on computer systems alone is not yet possible. The machines may be on the rise, but they are not our masters just yet.

Trapped inside a remote controlled bomb – The potential dangers and misuse of autonomous technology.

Built by man, designed by nature – A look at how engineers turn to nature for answers to design problems.

The BMW i8 – A look at the future of hybrid vehicles.