The Perfect Crime: History of the getaway car

The Perfect Crime: History of the getaway car 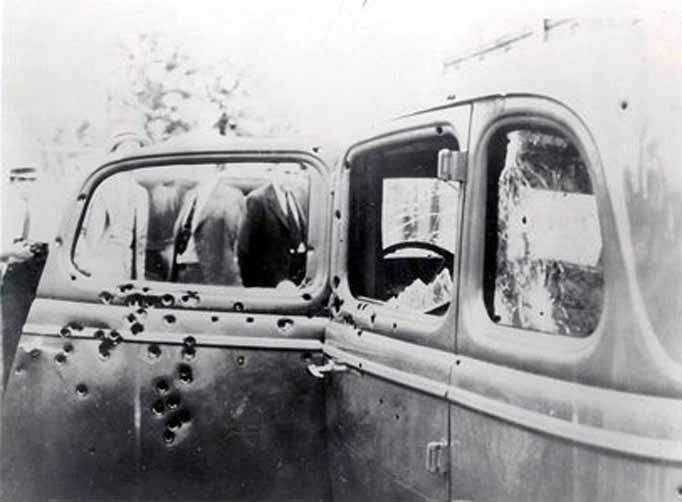 It’s the most cinematic of crimes. Jumping into a car after a successful robbery and just driving off into the sunset, escaping the attention of the police and retiring to spend you ill-gotten gains in peace. Bonnie and Clyde. Thelma and Louise. Ryan Gosling’s nameless character in Drive. The getaway car has been mythologized into something romantic, despite the ending never quite working out as planned. But what about real life getaway cars? How do you make that clean escape?

The increased availability and use of automobiles at the start of the twentieth century was always destined to lead to the use of cars in criminal activities. The quick getaway was not a new concept with outlaws across the world having used horses to aid their crimes for centuries. The wild west was a prime example, with Jesse James and his gang terrorising banks and trains on horseback. 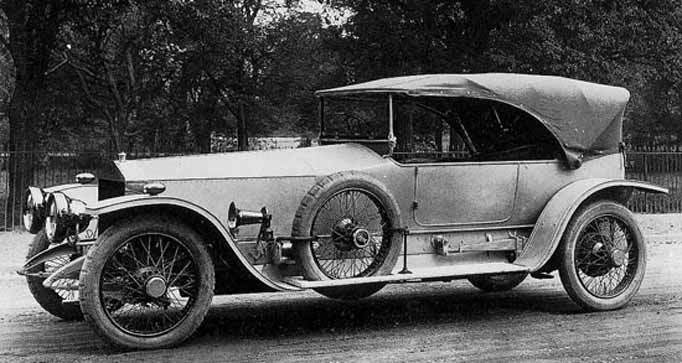 December 21st, 1911. A bank courier was leaving the “Société Générale” to begin his deliveries when he was attacked by a violent gang of French Anarchists known as the “Bonnot Gang”. Caught halfway between the bank and his truck, the courier had 5,126 francs and a number of securities documents stolen from him. Before he could raise the alarm, the gang were gone, disappeared in a Delaunay-Belleville car the gang had stolen two weeks earlier.

This is the first recorded use of a getaway car to escape the scene of a crime. This bold new tactic was further utilised by the “Bonnot gang”. To show just how radical this tactic was, you only have to look at another raid by the gang.

In March 1912, the gang stole another car, this time a de Dion-Bouton, and used it to conduct a violent raid on a bank in Chantilly. The two policeman who responded first tried to pursue but were unable to keep up – because one was on a bicycle whilst the other was on horseback.

Despite the first police car having been in operation since 1899, the popularity of automobiles soon led to a need for the police to adapt. But as quick as the police forces made changes, the criminals were always one step ahead. 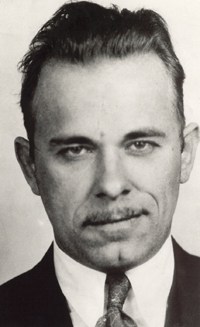 The most famous bank robber in modern history, John Dillinger was an icon of 1930s America. Becoming a sort of depression-era Robin Hood (except he never gave the money he stole away), Dillinger captured the imagination of the American public, robbing twenty four banks and breaking out of jail twice.

His crime spree forced the US government into drastic action, helping to shepherd the formation of the Federal Bureau of Investigation (FBI) into existence.

Dillinger’s trademark was just how quickly his robberies took place. To do this, Dillinger took full advantage of the increasingly powerful cars available on the market. In particular, Dillinger liked using the Ford cars available at the time, including a Model A that sold at auction in 2010 for $165,000.

Dillinger liked using Fords so much that he wrote a letter to Henry Ford himself, thanking him for building the cars. Although there have been several questions regarding the veracity of the letter, an investigation by Jalopnik revealed that the famous bank robber did indeed send a letter to Mr Ford.

I want to thank you for building the Ford V8 as fast and as sturdy a car as you did, otherwise I would not have gotten away from the coppers in that Wisconsin, Minnesota case.

Yours till I have the pleasure of seeing you.

In the end Dillinger was betrayed and killed outside the Biograph theatre, having been to the pictures to watch a gangster film “Manhattan Melodram”. His death only increased the legend of the American bank robber. 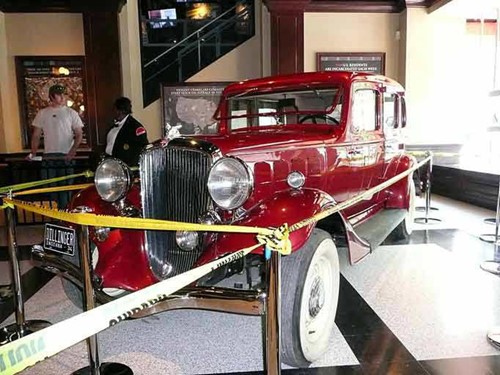 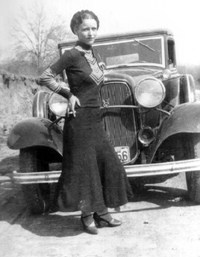 The American outlaw was further romanticised by the crime spree of Bonnie and Clyde. Active around the same time as Dillinger’s public enemy era, the discovery of paperwork, poems and photos from the pair left behind after a hasty escape firmly established the pair as lovers on the run, both sexy and dangerous.

Unlike other criminals at the time, Bonnie and Clyde used one car for the majority of their crimes. Once again, Henry Ford unwittingly provided the vehicle of choice. The stolen 1934 Ford Fordor Deluxe Sedan covered over 2,500 miles as the Clyde gang carried out their crime spree across America.

The gang evaded capture for over three years until the car that had fared them so well became their coffin.

On May 23, 1934, Bonnie and Clyde were driving to visit relatives in Louisiana when they were ambushed by a posse. Six police officers fired on the car with automatic rifles, shotguns, and pistols, a volley of gunfire so loud that each member of the posse suffered temporary deafness for the rest of that afternoon. A total of 130 rounds were used on the car. 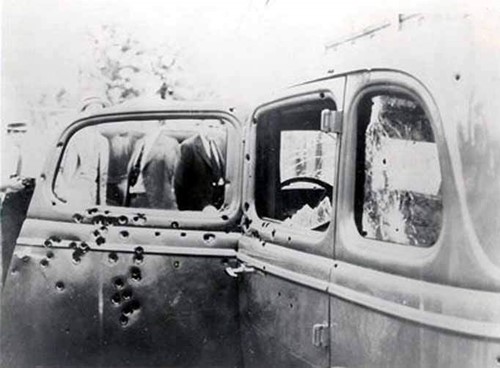 Crime scene photograph of the Bonnie and Clyde car.

When searching the car, the police found 15 sets of license plates from various states, showing just how much effort they made to keep hold of just one stolen car.

The death of Bonnie and Clyde signalled the end of the famous bank robber era, with Dillinger dying a few months afterwards, as well as other notorious criminals such as Pretty Boy Floyd and Baby Face Nelson each meeting their gruesome end.

The Bonnie and Clyde car is now on display at a casino resort in Las Vegas. 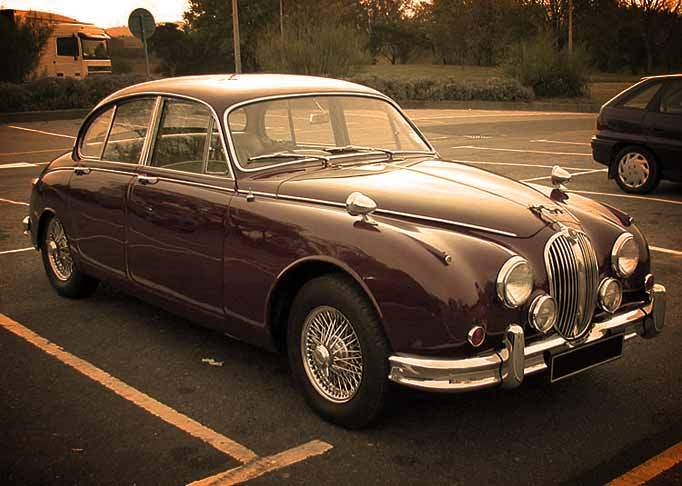 During the 1960s, British criminals turned to a somewhat unexpected source for their getaway vehicle – The Jaguar MK2. Its 3.8 litre engine combined with 220bhp gave the car a top speed north of 125mph, 0-60 in 8.5 seconds. With five adults fitting comfortably in the car, the MK2’s speed and size made it an ideal choice for the criminal on the run.

Its popularity amongst crooks became such a problem, the police began using the MK2 themselves in a bid to level the playing field.

Fast forward until the 1990s and other cars became more widely used, especially for the increasing popularity of ram raids, where criminals drive their car into a building to break through the security defences of retail shops and jewellery stores.

One particular model caused havoc – the Lotus Carlton. A huge upgrade on the Vauxhall Carlton base model, the Lotus version could reach speeds close to 180mph with an acceleration better than some Ferraris. Costing £48,000 new, the price barrier was high. This didn’t stop a gang of criminals in the West Midlands stealing a Lotus Carlton and using it to help secure £20,000 worth of stolen goods during a month long crime spree. 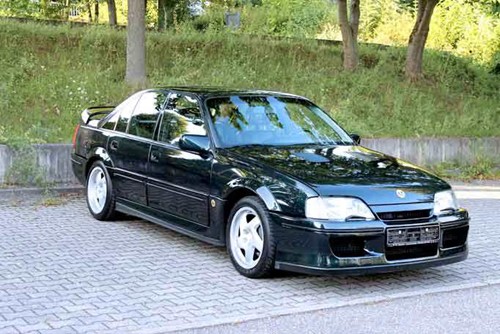 The incredible speed of the Lotus Carlton generated a moral outrage across the public and media, their fury aimed at just why a car built with motorsport racing specs was allowed on the road. The police panda cars of the time couldn’t keep up, only capable of 90mph, half the top speed of the Lotus Carlton. One urban legend even has the car outrunning a police helicopter, it was that fast.

The age of the bank robbery is fading with the gradual shift to online services. But one gang are still keeping the spirit of the getaway alive – the “Pink Panther” European gang. A network of jewel thieves primarily based in Eastern Europe, their daring raids have put them at the top of Interpol’s most wanted lists.

In one robbery, the gang drove two Audis through a shopping centre in Dubai. Ramming into the highly expensive Graff jewellers, the criminals broke through security and made off with £8 million worth of watches and other items.

The seemingly fearless gang have stolen almost $500 million throughout bold robberies across the world, using disguises, motorbikes and even a speedboat to make their escape. With the number of gang members estimated at over two hundred, their criminal empire shows no signs of stopping.

The perfect getaway is something that has featured in Hollywood films ever since the 1930s. The idea of the tragic criminal dreaming of that escape has captured the imagination of both artists and audiences since the famous image of Bonnie and Clyde’s bullet riddled car was splashed across newspaper front pages.

Hollywood has one major difference. In real life, sometimes the criminals get away with it. In the movies, that can never happen.

Inspiration – The story behind the Sons of Anarchy TV Show